Nearly 5 million Puerto Ricans live in the mainland United States, a million of those in Florida alone. And that number is quickly climbing. Puerto Rico, the U.S.’s Caribbean territory, is struggling. 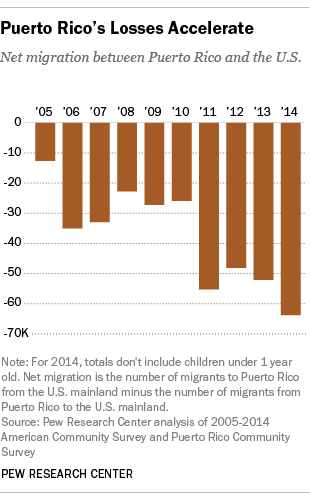 It’s more than $70 billion in debt and has been in the midst of a brutal recession for nearly a decade. Health care is on the brink of collapse. The economic crisis is so bad natives are fleeing to the mainland in record numbers.

According to the Pew Research Center, 84,000 people left Puerto Rico for the mainland in 2014. That’s a 38 percent increase from 2010. As more move north, Puerto Ricans stand to change the demographics of a critical swing state: Florida. They’re already catching up to Cubans in Florida’s percentage of eligible voters.

But now an average of 1,000 Puerto Ricans are arriving in Florida each month. With so much at stake for the island and its diaspora, where exactly do the candidates stand on resolving Puerto Rico’s debt and statehood battle?

Sen. Marco Rubio won Puerto Rico’s primary this month in a blowout. Most Puerto Ricans who’ve left have moved to Rubio’s home state. So the senator has made a hard push for their support. 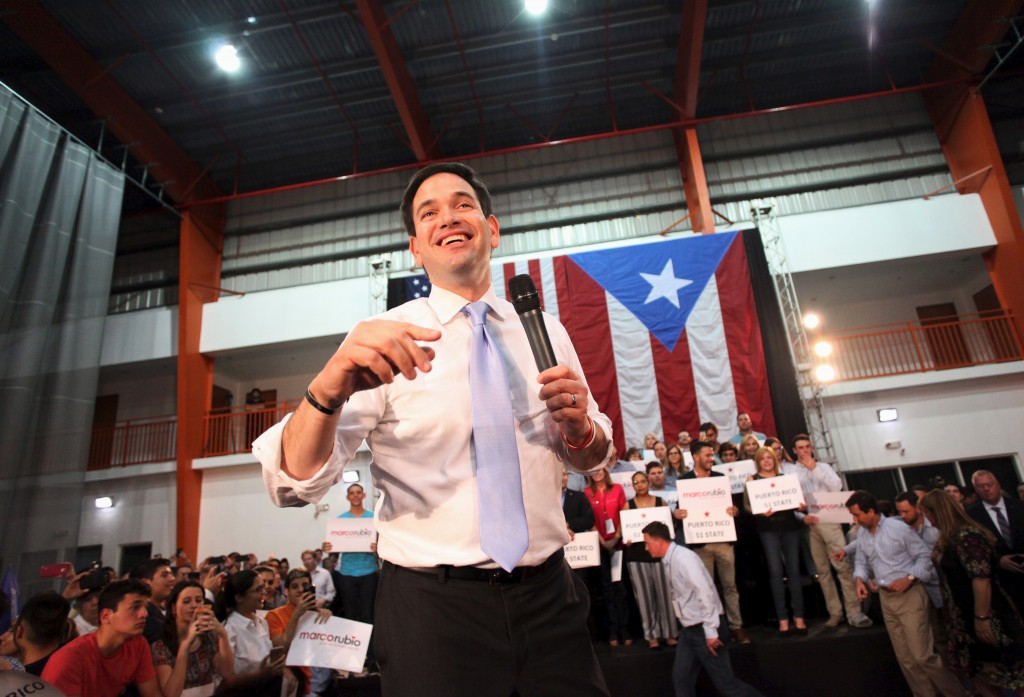 Florida Sen. Marco Rubio supports authorizing Puerto Ricans to vote up or down on statehood, but is against any proposed bailout measures for its struggling economy. Photo by Alvin Baez / Reuters

Rubio has gone on record explicitly opposing of any economic bailout. In a September op-ed to “El Nuevo Dia,” and while campaigning in San Juan, he urged Puerto Rico to get its own fiscal house in order, calling on local leaders, including Democratic Governor Alejandro Javier García Padilla, to hunker down on spending instead of seeking the same bankruptcy protections typically afforded to U.S. states. Some criticize his stance as a conflict of interest. He’s come under fire for receiving campaign contributions from hedge fund executives who hold some of Puerto Rico’s massive debt.

While Rubio supports the island becoming America’s 51st state, he’s previously deviated from GOP colleagues on exactly when to exercise that option. Rubio has stated in the past that any change in Puerto Rico’s status should come following an absolute majority vote, instead of the minimum 51 percent. Many Puerto Ricans argue that they already voted in favor of statehood back in 2012. But Puerto Ricans debate the validity of the ballot measure because voters also had the option of choosing declaring complete independence. Instead, Rubio favors Congress authorizing a straight yes-or-no referendum on statehood.

“Ultimately, Puerto Rico’s status must be resolved, and its unequal treatment by the federal government must end. As president, I will continue to speak clearly about the importance of enabling Puerto Ricans to resolve their status.”

The Trump brand is largely negative on the island thanks to a bankruptcy scandal revolving around a golf resort the presidential candidate doesn’t even own. As Carl Cannon of Real Clear Politics pointed out, how can a company loosely associated with the billionaire file for Chapter 11, but an entire U.S. territory with a 45 percent poverty rate can’t file for Chapter 9?

Another factor that puts Trump at odds with the Puerto Rican electorate are his comments against birthright citizenship. Residents of all U.S. territories including Puerto Rico, Guam and the Virgin Islands are automatically U.S. citizens at birth. Any constitutional amendment, as Trump promised, could change that.

Sen. Ted Cruz hasn’t gone on record with any stance on Puerto Rican statehood. And neither Cruz, Trump nor Kasich have offered specific positions on how to alleviate Puerto Rico’s debt crisis.

Wednesday’s Democratic debate, hosted by the Washington Post and Spanish-language network Univision, tackled issues important to Latino voters but primarily focused on immigration and foreign policy with countries like Cuba and Mexico. Puerto Rico was reduced to only one question. The candidates were asked if they’d support a bailout of the island’s massive debt. Hillary Clinton vowed to assist the territory within her first 100 days in office and called the Republican-lead Congress’ treatment of the island as “a grave injustice.” 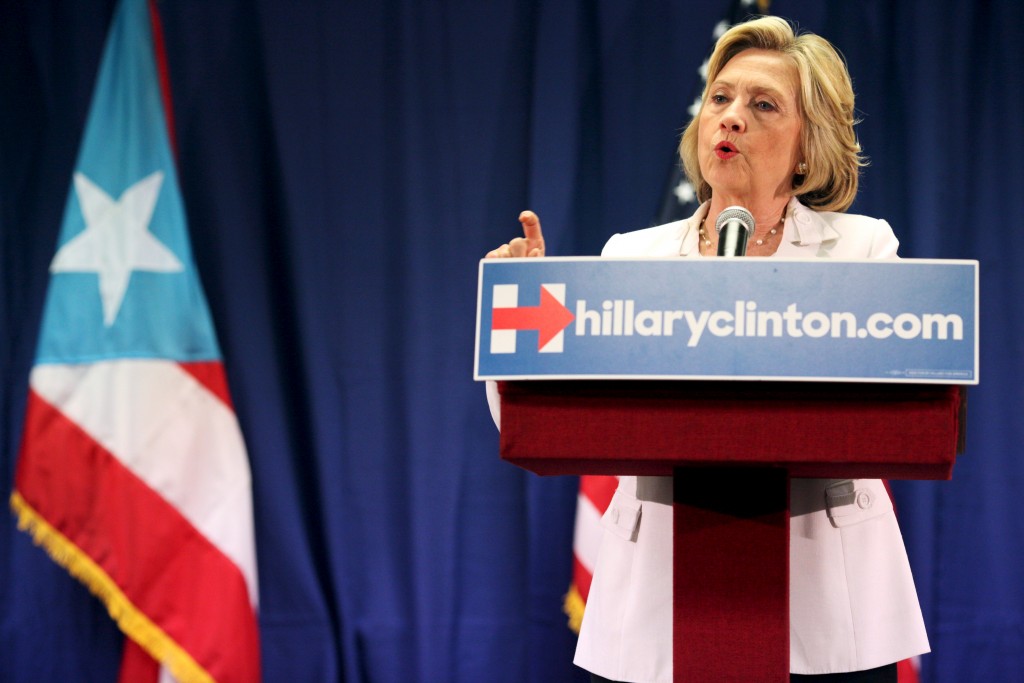 In a statement she criticized the federal government for what she called “inconsistent — and incoherent — treatment of Puerto Rico in federal laws and programs,” including Medicare and Medicaid. She’s said it’s not a bailout but “a fair shot at success.”

“The challenge is multi-faceted, and will ultimately require Puerto Rico to find a way to pay back its debtors in an orderly fashion. As a first step, Congress should provide Puerto Rico the same authority that states already have to enable severely distressed government entities, including municipalities and public corporations, to restructure their debts under Chapter 9 of the Bankruptcy Code.”

But when it comes to Puerto Rico’s future, Clinton insisted that’s a decision for Puerto Ricans to make themselves. In the same statement she said “that question needs to be resolved in accordance with the expressed will of our fellow citizens, the people of Puerto Rico.”

Sen. Bernie Sanders is a long-time supporter of Puerto Rico’s statehood. He also backs a bailout, saying the commonwealth “should be afforded the same bankruptcy protections that exist for municipalities across the United States.” In October, Sanders wrote a letter to Congress urging them to put an end to austerity measures that have cut spending on public services like health care.

“But we also should recognize that the reason Puerto Rico has such unsustainable debt has everything to do with the policies of austerity and the greed of large financial institutions.  Puerto Rico has been in a severe recession for almost a decade. Today, more than 45 percent of the people in Puerto Rico are living in poverty, the childhood poverty rate is greater than 56 percent and real unemployment is much too high. Our goal must be not only to give Puerto Rico the flexibility it needs to restructure its debt, but to make sure that it can rebuild its economy, create good-paying jobs and expand its tax base.”

The bottom line: Puerto Rico is important. Its residents can serve in the U.S. military but can’t vote for its commander in chief. So while they may be pandered to for primary delegrates, will their voices remain silenced in the primary election? With Floridians set to head to the polls this week, Puerto Rico’s economic recovery and lingering statehood question may be too big for candidates to ignore.

Left: For some, Puerto Rico is a U.S. commonwealth. For others, it's the world's oldest colony. The one thing Puerto Ricans don't want the island to be: just another political talking point. Photo by Joe Raedle/Getty Images.