How safe is your place of worship?

Many Americans may be wondering what security measures are in place at their place of worship after a gunman’s attack on a San Diego synagogue service this past weekend left one person dead and three others wounded.

The same question was raised after 11 people were killed in the Oct. 27 shooting at the Tree of Life synagogue in Pittsburgh.

The San Diego synagogue, Chabad Poway, had no security guards – it couldn’t afford them. An off-duty border patrol agent was among the congregants, and there are reports he both tried to disarm the shooter and then chased after him outside of the synagogue.

Chabad Poway Rabbi Yisroel Goldstein told The New York Times that a hired security guard may have stopped any attack before it began.

“This may have been prevented if we had that,” said Goldstein, who was injured in the attack.

President Donald Trump also alluded to this question when he said “the results would have been far better” if the Tree of Life congregation had armed guards or members.

Synagogues and mosques deal with crime-related problems that are much different than the average church.

According to news reports at the time, the Tree of Life synagogue did not have armed guards present at the time of the shooting. Many community leaders rebuked Trump’s statements and argued that increasing armed security was not the solution.

We are a sociologist and criminologist who in 2015 conducted a national study of religious congregations’ experiences with, fears of and preparations for crime.

Our study, which was supported by the National Science Foundation, featured a survey of over 1,300 places of worship and in-depth interviews with more than 50 congregational leaders.

While neither the Chabad Poway nor the Tree of Life synagogue was part of our study, the results of this work may hold useful insights for conversations about crime and security in places of worship. Here’s what we found.

Crimes, most commonly vandalism and theft, were committed at about 40% of congregations in the year prior to the survey. This overall percentage was not significantly different across religious traditions.

When we dug deeper, though, we found that synagogues and mosques deal with crime-related problems that are much different than the average church. 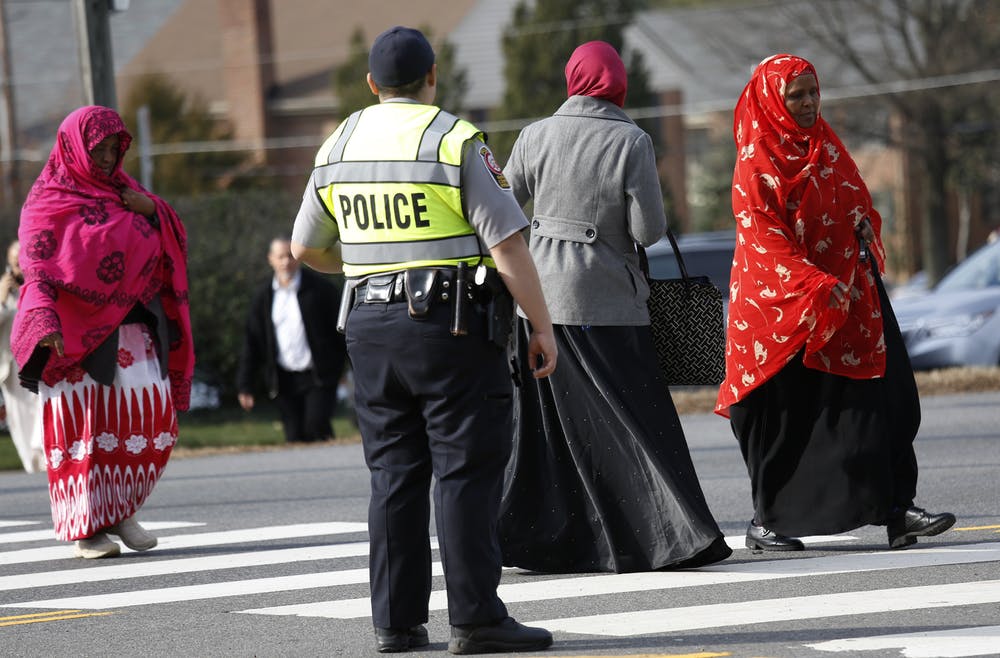 Our survey found, for instance, that synagogues and mosques were three times more likely than congregations overall to have received an explicit threat in the prior year.

Respondents also reported significantly greater fear that congregants would be assaulted or murdered on the congregation’s property. This helps explain another pattern we found: Jewish and Muslim congregations are in many ways far ahead of congregations representing other religious traditions when it comes to thinking about and implementing security measures. 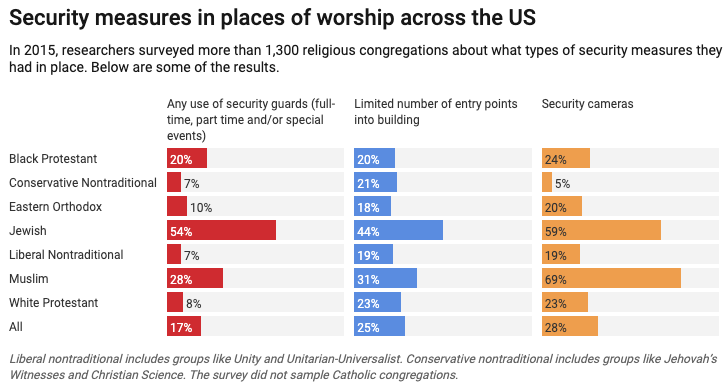 Chart by The Conversation, CC-BY-ND. Data via Review of Religious Research, 2018

Our interviews found that most places of worship have a hard time implementing security. Some of this is simply not enough money. Larger and wealthier congregations tend to have more security in place.

Beyond resources, our interviews consistently found that places of worship view security measures as a potential threat to their mission of creating a sacred space that is open to their communities.

However, our survey also found that synagogues and mosques were much more likely than the average congregation to have security cameras, restricted entry points, security guards and other security measures. For example, only 17% of all the congregations in our survey reported any use of security guards, whether full-time, part-time or for special events. This compares to just over 54% of synagogues and 28% of mosques. Synagogues are also more likely to have communicated with their local police.

Beyond the statistics, our in-depth interviews with leaders of congregations found that synagogues and mosques tend to put a great deal of thought into security. For synagogues in particular, our interviews found that local organizations are effective at sharing information and resources about security threats and strategies – for example, the Jewish Community Relations Councils.

The U.S. must find ways to address the threats and violence against synagogues, mosques and other places of worship. In the meantime, congregations can evaluate their security risks and precautions.

The sparse resources of most congregations present some limitations, but there are steps they can take at little or no cost. For instance, congregations can assess whether entry points should be restricted to increase the ability of staff and members to observe who enters the building.

Congregations are not alone in these efforts. Many local police departments will conduct a security assessment for specific congregations or offer a workshop for multiple congregations. Furthermore, many congregations have members who have relevant skills, from installing new locks to setting up security cameras. Simply starting a conversation within your community can help your congregation identify these resources.

This article first appeared on The Conversation. It was originally published on Nov. 2, 2018 and updated on April 29, 2019.