After a spike of human cases of the plague in 2015, a year the disease inflicted 16 people across portions of the western United States, the number of occurrences this year have dropped.

Four cases of human plague in 2016 were reported in New Mexico, one of several western states where the infectious bacterial disease is commonly found, according to the Centers for Disease Control and Prevention.

Between 1900 and 2015, there have been 1,036 human plague cases in the U.S. On average about nine people in the country contract the plague, a disease known for ravaging populations around the world during Medieval times.

The disease decimated an estimated 60 percent of Europe’s population in the 14th century and killed roughly 50 million more in Asia and Africa. The plague is now most prevalent in Madagascar, where 95 percent of the world’s human cases are found. In 2015 there were 320 cases reported worldwide, including 77 deaths, according to the World Health Organization.

Dr. Paul Mead, chief of Epidemiology, Bacterial Diseases Branch with CDC’s Division of Vector-Borne Diseases, said the fluctuation in the number of human cases of the plague in the U.S. may be attributed to weather, when wet winters are followed by cooler summers.

He said the bacteria that causes plague, Yersinia pestis, cycles naturally through rodents, and the fleas they carry, in western states. U.S. outbreaks of the disease occur most often in New Mexico, California, Arizona and Colorado. The first American epidemic happened in San Francisco, between 1900 and 1904, and the disease was likely imported from Asia.

“Human plague is often preceded by an outbreak or epizootic in which large numbers of susceptible rodents die,” Mead told the NewsHour in an email. “When this happens, hungry infected fleas leave the dead rodents and seek blood from other hosts, including humans and domestic pets.”

Mead said the CDC tested more than a hundred animals last year, of which 20 were found to have the plague. This year the CDC tested eight animals and only one was positive.

“Historically, CDC tested hundreds of animals and fleas each year,” Mead said. “As state health laboratories, particularly in Arizona, California, Colorado, and New Mexico, gained the ability to do their own testing, we’ve tested fewer samples.” 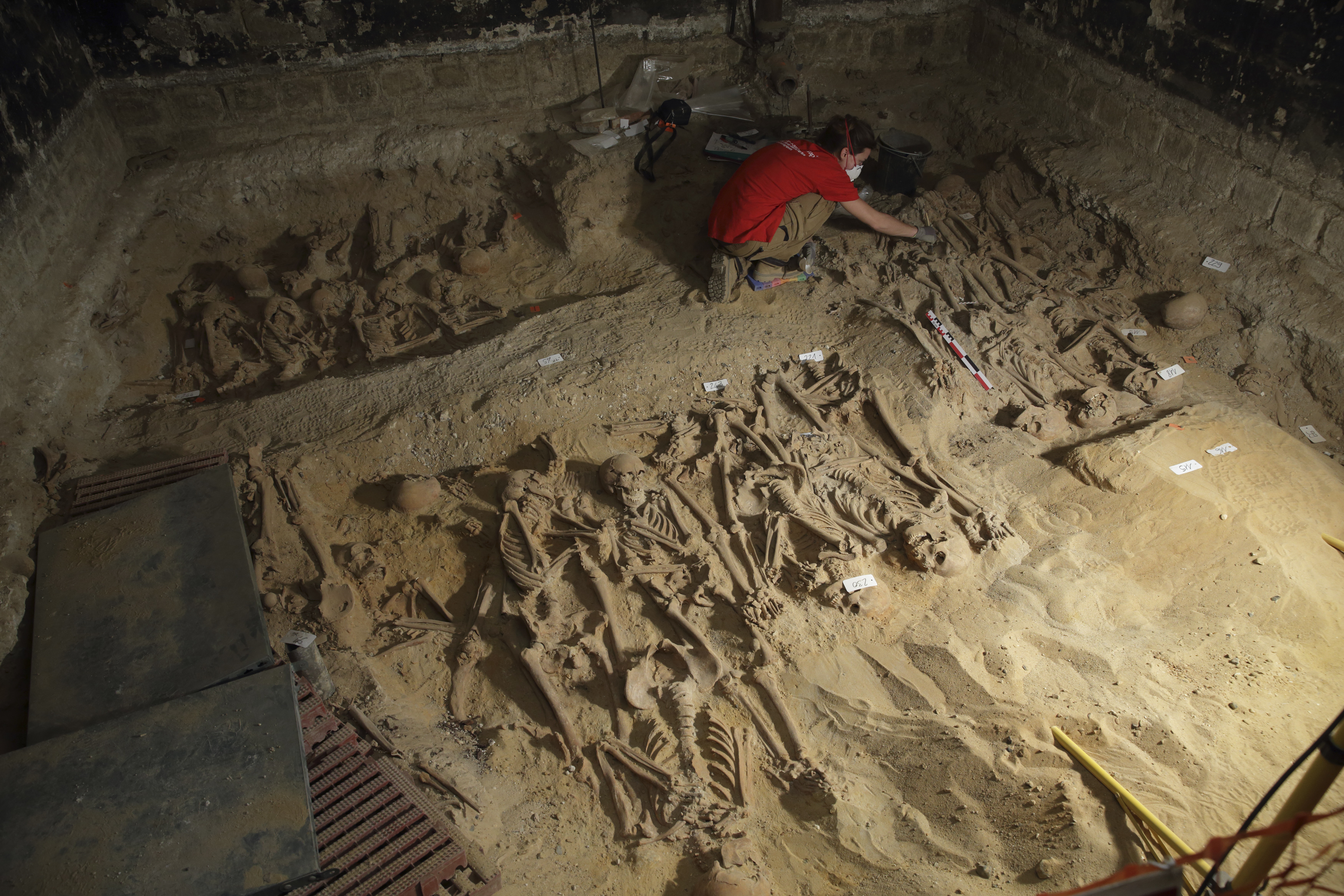 An archaeologist works March 10, 2015 at the site where eight mass graves, with more than 200 skeletons, were found under the Monoprix Reaumur Sebastopol store in Paris. The discovery, made during renovation work in the cellar of the branch of Monoprix, has revealed what experts believe are victims of a sudden illness resembling an outbreak of Bubonic plague and could prove useful to historians studying burials in the Middle Ages. Eight communal graves have so far been discovered, seven small plots and one much larger one in which 150 skeletons have already been unearthed. The supermarket stands on the site of the cemetery of the Trinity hospital, founded in the 12th century and destroyed at the end of the 18th, and experts say the organisation of the graves points to a “mass mortality crisis”. Picture taken March 10, 2015. Photo By Philippe Wojazer

While there are three forms of the plague, which stem from the organ infected by Y. pestis bacteria, the most common is a lymph node infection known as the Bubonic plague. Bubonic infections make up about 80 percent of the cases, followed by the septicemic (blood) plague. Most instances can be treated by antibiotics.

The pneumonic plague is the most dangerous of the three with a 90 percent fatality rate. This form develops in the lungs, often because those who contract the disease wait too long to receive treatment or are not prescribed the correct antibiotics, according to New Mexico Public Health Veterinarian Dr. Paul Ettestad.

Ettestad said despite the dangers and a history of the plague dating back to the 1940s in the state, there is only a 7 percent fatality rate among humans who contract the disease in New Mexico, often through their pets in semi-rural areas between the cities of Albuquerque and Santa Fe.

“If there’s rodents with dead the fleas, they make their living by getting a blood meal,” he said. “A lot of these dogs or cats, they let them inside the house, they sleep in bed with people. It really looks like that’s when it happens.”

The plague has “found a home here in the four corners” region of the country, Ettestad said, also noting that the state is now largely focusing its efforts to combat the disease on prevention methods like flea control for pets.

Dr. Vicki Kramer, chief of vector born disease for the California Department of Health, told the NewsHour in a telephone interview earlier this year that her agency has worked closely with federal partners and other jurisdictions to study the number of animals infected by the plague, particularly after the state saw an uptick in human cases in 2015.

The summer of 2015, had an escalation of human plague cases in California, including two people who contracted the plague at campgrounds in Yosemite National Park.

Since then, the department has collected blood samples from various dead rodents to look for signs of the plague, used flea control practices in portions of the Sierra Nevada Mountains where there was “high plague activity,” and in some cases treated rodents and their burrows for the disease with insecticides. Filtered paper strips are used to test for the presence of the plague in fleas and sent to a laboratory.

“Most people, if they get a plague in infection, will be in a Bubonic form,” Kramer said. “Sometimes it can progress to the septicemic form.”

Symptoms of the plague include fever, nausea and swollen lymph nodes and can be treated with antibiotics if discovered early on. Symptoms usually take about two weeks or less to kick in, officials said.

The mortality rate for untreated plague once ranged from 66 percent to 93 percent but has been scaled back to 16 percent due to the advent of antibiotics, according to the CDC.

Left: California Department of Public Heath workers treat the ground to ward off fleas at the Crane Flat campground in Yosemite National Park, California in the August 10, 2015. A second Yosemite campground in Tuolumne Meadows was shut down for five days after a pair of dead squirrels were found to be infected with plague. The closure came a week after a child who camped elsewhere in Yosemite, one of America's top tourist destinations, was hospitalized with the disease. Photo by Reuters via California Department of Public Health.