NEW ORLEANS – Long traffic lines filled the highways heading out of New Orleans on Saturday as residents here and throughout Louisiana headed out of town to escape the path of Hurricane Ida. Forecasters expect Ida to make landfall as a powerful category 4 hurricane.

As satellite photos showed the storm taking the feared “buzz saw” look over the central Gulf of Mexico, normally quiet Interstate 10 in New Orleans jammed with bumper-to-bumper traffic in both directions. At times, the traffic slowed to a crawl as residents evacuated. 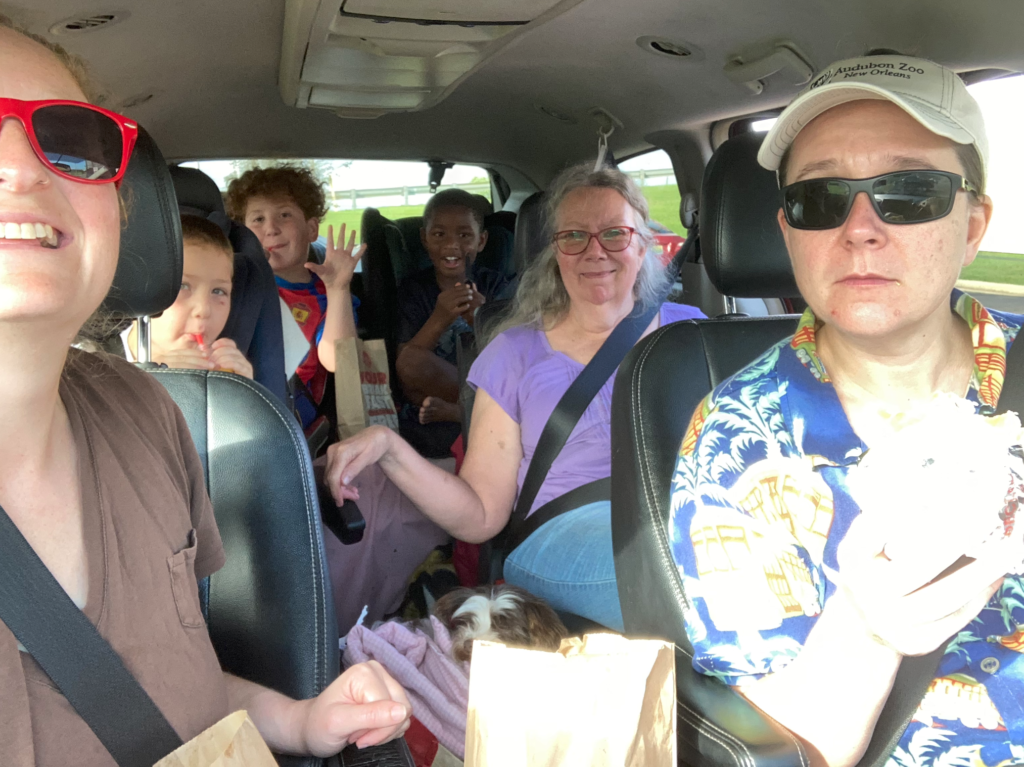 Dani and Vanessa Levine and their family left their home in Louisiana to escape the path of Hurricane Ida. Photo courtesy of the Levine family.

Dani and Vanessa Levine are part of the exodus, leaving with their family, including their three young kids, grandmother, and family dog early Saturday as the storm intensified. “I don’t want to be scared that something is going to come through my window and then be without electricity for a long time,” Dani Levine told the PBS NewsHour while driving with her wife in their family van from the road in Alabama. The family is heading to Atlanta.

“We were really waffling between staying and going. We don’t want to be a drain on city resources,” she said. “At the end of the day, it’s just stuff. We left our stuff and took what matters most: Our family.” 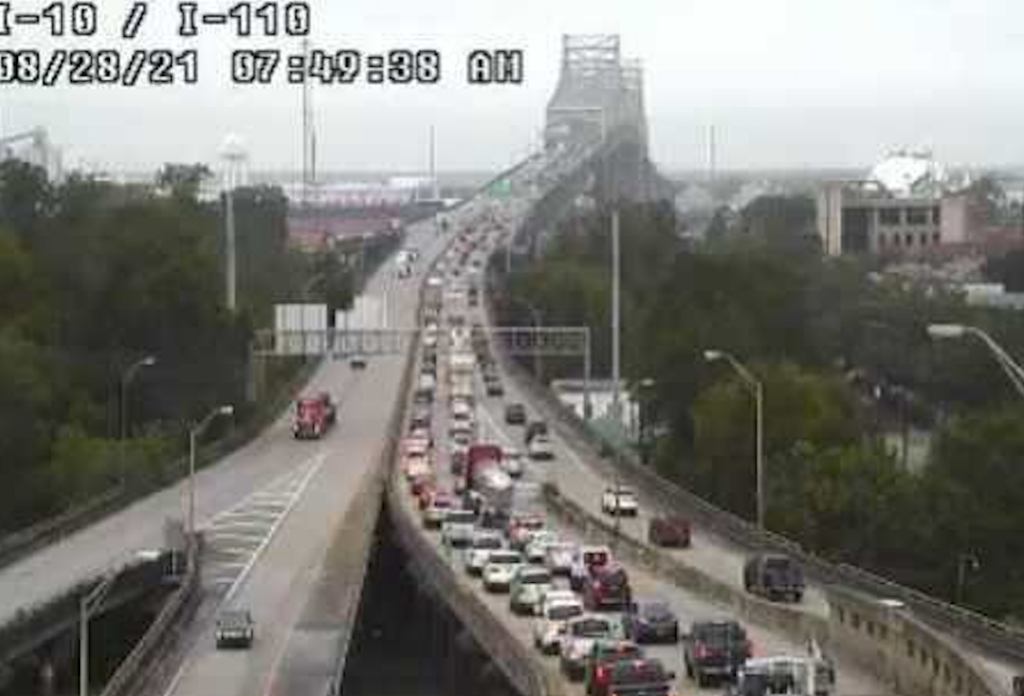 Ida is expected to rapidly intensify as it moves over the central Gulf of Mexico on Saturday and then make landfall on Sunday. It could hit as a category 4 hurricane on the anniversary of Hurricane Katrina, which hit 16 years ago. Louisiana Governor John Bel Edwards has declared a state of emergency as the storm strengthens and increases in size.

“We have a very serious situation on our hands,” Edwards said at a Friday news conference. “Now is the time to finish your preparations, and I want to encourage everyone that by nightfall tomorrow [Saturday], you need to be where you intend to be to ride out the storm.”

Benjamin Schott, meteorologist-in-charge at the National Weather Service in New Orleans, warned that Hurricane Ida will be a “life-altering storm for those who aren’t prepared.”

“At the end of the day, it’s just stuff. We left our stuff and took what matters most: Our family.”

Major impacts of Ida are expected as early as daybreak Sunday. Edwards said 5,000 members of the Louisiana National Guard have been activated to respond to the storm, which could result in extreme flooding. Large portions of southern Louisiana could see 10 to 15 inches of rain, winds up to 140 m.p.h. and a tidal surge up to 15 feet. Hurricane force winds of 100 m.p.h. are expected as far inland as Baton Rouge. 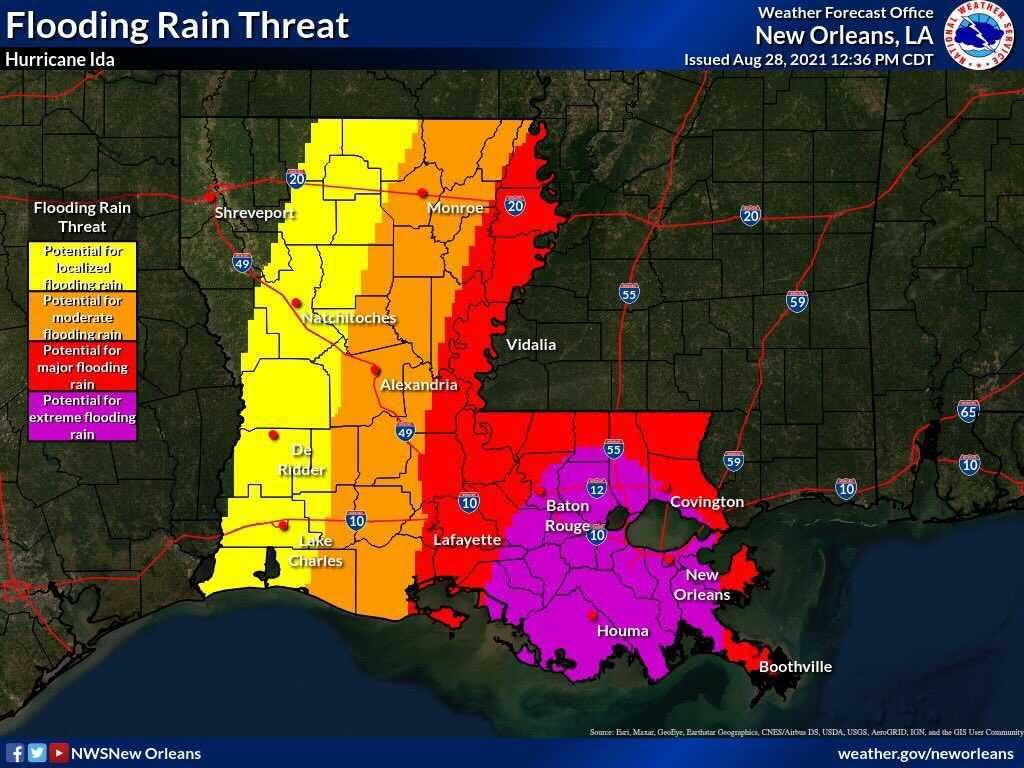 In New Orleans, most of which is below sea level, it’s too late for mandatory evacuations for residents. Because the storm intensified so quickly, Mayor LaToya Cantrell urged residents to hunker down and secure hurricane preparations by noon Saturday or shelter in place.

“The citywide evacuation plan cannot be implemented. We’re not calling for a mandatory evacuation because the time simply is not on our side. We do not want to have people on the road and therefore in greater danger because of the lack of time,” she said. Because the situation changed so quickly, the mayor made those comments during a second previously unscheduled news conference late Friday.

City officials say New Orleanians inside the city’s levee protection system are safe but noted that residents outside of the levees were under a mandatory evacuation order and should get out as soon as possible. Because of the low flat terrain of the New Orleans area, a complex system of levees, floodgates, canals, and pumps are required to reduce the risk of flooding. Cantrell said the state had signed contracts with 125 coach buses in the event of a post-storm evacuation, which could be triggered by a combination of infrastructure damage and power outages. 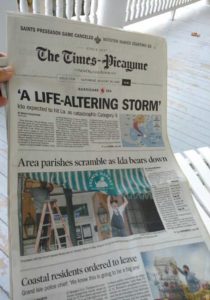 Regional officials encouraged residents to leave if able, or to buckle down and prepare for a serious storm. Photo by Roby Chavez

Sixteen years after Katrina, which caused more than 1,800 deaths and $125 billion in damage, New Orleans levees are in the best shape ever after getting a $14.6 billion upgrade. Although the new levees are already sinking, they are expected to provide their present 100-year level of hurricane protection through 2073. Combined floodgates and pump stations were built at the ends of drainage canals in New Orleans to block surge from challenging weaker interior floodwalls — an Achilles heel in Katrina.

There is great worry along the rural southeast coast of Louisiana, where residents are expecting a direct hit from Hurricane Ida. Mandatory evacuations were ordered along the coast in Lafourche, Terrebonne, St. Charles Parishes, and parts of Plaquemines Parish and Jefferson where Grand Isle is located.

After storm projections changed quickly, Highway 1 in Grand Isle was flooded with a steady stream of traffic including RVs, boats, and trailers. It is the only highway leading out of the barrier island. It was not easy to convince residents who are used to riding out storms, but most are guided by an old Louisiana saying, “run from the water and hide from the wind” — a warning residents appear to be heeding.

The Grand Isle mayor warns there will be no service once the water rises. All ambulances and fire trucks will be evacuated, and the road will be cut off once the levees are closed at 7 PM Saturday.

“This is serious. It will be right on top of us. For 12 hours, we’ll take a beating, and it’ll constantly be building up. It is one thing we’re all concerned about. It could really do some serious damage,” Mayor David Camardelletold local station WVUE.

As Ida plots a path to smash into the Louisiana coast as a potentially catastrophic storm, Louisiana is still dealing with a surge of COVID cases and record hospitalization, which has led to hospital staffing shortages across Louisiana.

According to the Louisiana Department of Health, this week there were nearly 2,729 patients with COVID-19 in Louisiana’s hospitals. Hospitalizations during this latest and worst surge in Louisiana peaked on Aug. 17 with a record-setting 3,022 patients. With widespread damage and power outages expected for days, it is another factor in a quickly changing forecast.

“The implications of having a category 4 storm with a southeastern strike while our hospitals are full is beyond what most people normally contemplate and beyond what our normal plans are,” Gov. Edwards said.

According to White House press secretary Jen Psaki, reinforcements include 47 ambulances operated by 94 emergency service providers “to support patient movement statewide to assist the state in decompressing hospital load should that be needed,” Psaki said.

If Ida continues on this path, it could join other catastrophic hurricanes. The National Hurricane Center says some of the deadliest tropical storms and hurricanes ever to hit the United States have struck the Louisiana shoreline. Memorable storms include Ike in 2008, Rita and Katrina in 2005, Andrew in 1992, Camille in 1969, Betsy in 1965 and Audrey in 1957 — all of which claimed many lives.

If Hurricane Ida hits with fury, the Levines and many others evacuating expect to be away for a while. For their young kids, it’s a fun day of driving, eating fast food, and extra video screen time while their moms keep an eye on the developing storm.

“This storm seems bigger and quicker and scarier. I just don’t know what to think. I just hope we have a place to return to,” said a nervous Levine with her kids playing in the background.

Left: A satellite photo from the National Hurricane Center shows Hurricane Ida after the storm passed over Cuba. Image via NOAA