‘I want you to come now, Mami.’ A 3-year-old calls her mother from detention

As the Trump administration works to meet a U.S. District Court order to reunify children forcibly separated from their parents at the southern U.S. border, several hundred children still remain in the care and custody of the U.S. government. Fifty-seven children under age 5 were reunited with their families over the last two weeks, the administration told reporters Thursday, but 46 more between the ages of zero and four, were deemed “ineligible” for reunification. The Department of Health and Human Services said it is working to identify and vet family members or potential sponsors to house those children.

The administration on Thursday listed the reasons for ineligibility. Some parents had a criminal history, some had been deported, and in some cases, the person the child was separated from was not a parent. 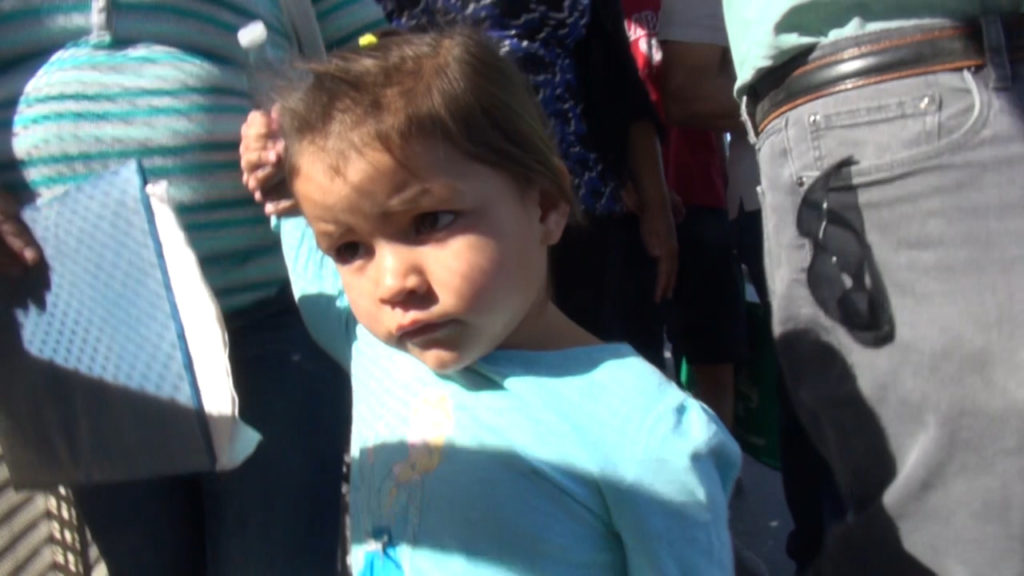 Sofi walks with her grandmother, shortly before being separated. Image by Michael Miller

One of the children in this last category is 3-year-old Sofi, who we first met three weeks ago with her grandmother, Angelica, at a shelter in Juarez, Mexico. Sofi’s mother had crossed the U.S. border earlier, with a younger sibling. Her grandmother, who said she’s raised Sofi since she was a baby and carried guardianship documents with her from Mexico, was bringing Sofi to join the rest of the family in America. For years, she said, the family was targeted by Mexican cartels. Several family members — including Angelica’s husband, her son, daughter-in-law, and three grandchildren – were brutally murdered, she said.

“We don’t have anything [in Mexico],” Angelica told us during an interview at the shelter. “I pray for the President [Trump] to give us the opportunity to be free, to live without fear of going somewhere and fearing that they could do to us what they did to the rest of my family.”

Her grandmother, who said she’s raised Sofi since she was a baby and carried guardianship documents with her from Mexico, was bringing Sofi to join the rest of the family in America.

Angelica and Sofi walked across the bridge from Juarez to El Paso on June 20, 2018, crossing the U.S. border at a legal point of entry to make an asylum claim. They were held for two days. Angelica was released from custody on Friday, June 22, but according to her account, she was told that she could not take Sofi with her, because she was not the mother. Angelica says U.S. officials kept Sofi’s birth certificate she carried with her, but gave her back the guardianship paperwork.

Sofi’s mother says she was called and told her daughter was being taken into U.S. custody, and that a social worker would be in contact with more information in the coming days. Since then, she has been working through the reunification process – gathering documents and submitting paperwork to get her daughter released from custody. They say they’ve been given no timeline for reunification. Two weeks after the separation, Angelica suffered a stroke; her family believes it was caused by the stress of the separation. Sofi’s mother has been allowed to have three, brief phone calls with her daughter. This audio, provided by Sofi’s mother, is from the most recent call.

Left: Listen to 3-year-old Sofi call her mother, after she was separated from her family more than three weeks ago while seeking legal asylum at the U.S. border.