Sexist online reactions to an ad campaign featuring a female engineer prompted engineers to share their stories on Twitter with the hashtag #ILookLikeAnEngineer.

On Aug. 1, Isis Anchalee, a 22-year-old platform engineer at San Francisco-based software firm OneLogin, wrote a post on Medium addressing reaction to a tech ad she was featured in on the BART.

The ad — one of four her company used for a recruiting campaign — received a deluge of negative attention online, where some people questioned the authenticity of the advertising based on Anchalee’s gender.

“The negative opinions about this ad that strangers feel so compelled to share illustrate solid examples of the sexism that plagues tech,” Anchalee wrote.

When a man posted the image to Facebook, suggesting that a female engineer wouldn’t look like Anchalee, she responded with #ILookLikeAnEngineer. 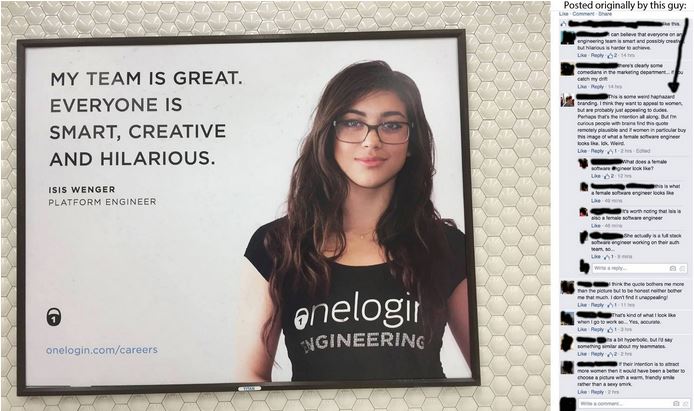 Isis Anchalee appeared in this ad for the software firm OneLogin, where she works. Image courtesy of Isis Anchalee

Engineers of all genders have chimed in on Twitter, posting their photos and asserting the fact that they are in fact, engineers.

I'm not in your SoMa office to unclog yr toilet, deliver tacos, or take out the trash & #ILookLikeAnEngineer pic.twitter.com/fxQjkbKAH8

"Working at Disney inspires creativity and brings out the best in me." Dimple #ILookLikeAnEngineer #DisneyTechnology pic.twitter.com/riJvOlWjcz

I've written software to protect and break into networks. I also like math. #ILookLikeAnEngineer pic.twitter.com/XPYVoTO7e5

Since its creation, the hashtag has been used over 50,000 times.