In a Military Town, a Muted Celebration About Bin Laden 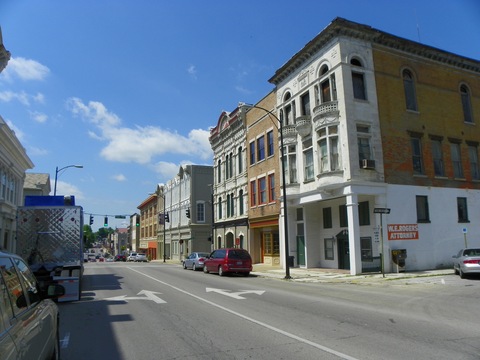 The impromptu celebrations that broke out following news that U.S. forces had killed terrorist Osama Bin Laden, were not limited to the New York and Washington. In places as far away as Columbus, Ohio; Austin, Texas and Dearborn, Mich., people, particularly young people, took to the streets and bars to cheer, chant and be together.

But more than some other places, Hopkinsville, Ky., could argue it had a right to rejoice.

The city, a Military Bastion in Patchwork Nation located near Fort Campbell, has given a lot to the post-9/11 antiterrorism effort. The base lost more than 100 soldiers last year in Afghanistan alone. It has lost hundreds more in Iraq. And the city has endured the economic hit of constant deployments that have pulled away large chunks of its population.

And yet, people in town say that on Sunday and in the days since the mood has been much more circumspect. At Fort Campbell, soldiers were talking about retaliation and, more importantly, what’s next.

Patchwork Nation knows Hopkinsville well, after several trips there in the past few years. It is one of the Military Bastions where we have focused on in our reporting. While the city once thrived on manufacturing and the train line that came through town, like other Military Bastions its life now is driven in powerful ways by the base that sits next door.

The 30,000 soldiers there help give the place its character — the insignia of the 101st Airborne’s Screaming Eagles is almost as prominent as the American flag. And the businesses and contractors that have sprouted up around it pour in money. Local officials estimate the base generates some $2 billion in contract work.

Still, Sunday night, the news of Bin Laden’s death was largely met with the sounds of silence.

“There were no celebrations to my knowledge,” said Carter Hendricks, president of the local Chamber of Commerce. “Of course, we’re a pretty sleepy town so I’m not sure most folks really knew about this until this morning. I barely stayed up to hear it myself.”

The local newspaper, the Kentucky New Era, devoted its entire front page to the story, said News Editor Jennifer Brown, but there were no pictures of joyous, flag-waving crowds.

“It’s not so much a celebratory tone here,” she said. “We had a staffer interview some soldiers outside the post Monday morning. They are worried about retaliation.”

Lindsay Dickey, a civilian computer technician at the base and a veteran told the New Era she was not overly optimistic. “It would be like coming over to Fort Campbell and killing our general,” she said. “We would still function.”

Another staffer on the base told the paper the death of Bin Laden, while good news, doesn’t change the reality of their fellow soldiers in Afghanistan.

A Story With Different Meanings

And that really is the biggest difference between how Military Bastions like Hopkinsville see the death of bin Laden.

It’s not that people there don’t care about the story. By all accounts — through emails interviews and reading the media — there is clearly a sense of accomplishment. But the muted response shows how different it can be to live the nation at large, where many watch the fighting from a distance and check in from time to time, and to live in a community where conflict is a big part of everyone’s daily lives.

Bin Laden is dead. That’s one mission accomplished — out of a long list of missions with which the military has been charged.

But after that, the larger question remains: when do the soldiers get to come home?