How do interfaith families navigate the holidays?

When Susan Katz Miller visits her Episcopalian in-laws for Christmas, she commutes with her menorah.

If Hanukkah happens to coincide with Christmas, it’s important to Miller to make space for both holidays in order to celebrate her family’s combined religious heritage.

Miller is a journalist, blogger and author of the book, Being Both: Embracing Two Religions in One Interfaith Family, which examines interfaith families in the United States. She is also the product of an interfaith marriage between a Jewish father and Episcopalian mother, and she’s carried on the tradition. And her children, ages 17 and 20, have flourished in a religiously mixed household, she says.

Miller grew up thinking her own origin story was unique, exotic even. But that’s changing. She believes her family exists at the tip “of this huge iceberg coming up of interfaith children.”

“There’s a big generational shift in our acceptance, and our relationships are crossing boundaries, whether that’s race, religion or culture,” Miller said. 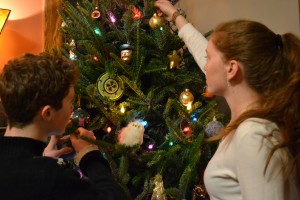 Ben and Aimee Miller decorate their family’s Christmas tree. Their mother, Susan Katz Miller, is a journalist, blogger and author who writes about interfaith families, including her own. Photo courtesy of Susan Katz Miller

Since the Census is prohibited by law from collecting data on religious affiliation, it’s unclear how many interfaith households exist in the United States today.

But in 2008, the Pew Research Center reported that more than one-quarter of married people in the United States lived in households that were religiously mixed. Factor in members of different Christian denominations, and that figure rose to nearly four out of 10 people who were married or lived with a partner.

It’s not uncommon for families, both past and present, to be pressured by clergy or extended family to pick one religion for the household. Miller’s mother, for example, put aside her Episcopalian practice and raised her children to be Jewish.

But parents often fail to give children enough credit, said Wendy Thomas Russell, a secular-parenting blogger who authored the forthcoming book, Relax, It’s Just God: How and Why to Talk to Your Kids About Religion When You’re Not Religious. “Children can handle the fact that people believe different things,” she said. “The thing that confuses them is when their parents don’t say anything.”

Miller’s son, Ben, said growing up in an interfaith home amounted to more than just “a bunch of Jewish stars on the Christmas tree or red and green Hanukkah candles.” They are part of an interfaith families community, led by a minister and a rabbi. They were educated in both faiths and were Bar and Bat Mitzvahed. 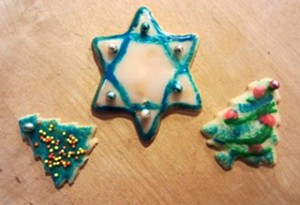 A sign of the United States’ growing diversity is the number of religiously mixed families. Photo courtesy of Susan Katz Miller

And what Ben took away from his upbringing is this: the two religions just aren’t so different.

Sheryl and Dharmesh Parbhoo were also committed to exposing their children to both his family’s Hinduism and Catholicism, which they considered a more middle-ground choice than her family’s faith, Reorganized Latter Day Saints. At their wedding, she wore a white wedding dress and was gifted a purple and gold silk sari. They served vegetable biryani and a meatless menu, along with wedding cake, which only her family could eat, because it contained eggs. (His family observed a strict, egg-free, vegetarian diet.)

For the Parbhoos’ five children, holiday traditions included dying Easter eggs and lighting oil lamps called diya. It meant trimming the Christmas tree and exchanging gifts and rakhi bracelets during Raksha Bandhan, a holiday that celebrates siblings. Over time, these festivities evolved into distinctly secular observances that focused on family and food, highlighting the cultures within the household. 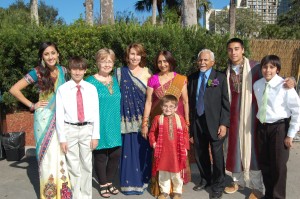 When Sheryl and Dharmesh Parbhoo married more than 20 years ago, their family united different religions and cultures. Here, left to right, Sheryl (center) stands with her daughter, Alyssa, twin son, Adam, her mother Jean Bryant, her youngest son, Chase, her mother-in-law, Sarla Parbhoo, her father-in-law, Baloo Parbhoo, her son, Nick, and her other twin son, William, during a family wedding in Orlando, Florida. Photo courtesy of Sheryl Parbhoo

“As they get older and see how other people celebrate holidays, that’s when they notice a difference,” said Sheryl Parbhoo, whose blog, Southern Life Indian Wife, chronicles her life and the religions and cultures her family brings together.

Holidays, Russell said, present an ideal opportunity to develop a child’s religious literacy about the stories behind the rituals, especially in interfaith households. She encourages religiously-mixed families to embrace all holidays and use them to help a child explore that part of their identity.

“You have the celebration, the decorations, all of the stuff. It burns itself into children’s memories,” Russell said. “It’s so impossible to forget when you have actual items that are in front of you. It’s not just a concept. It’s a menorah. It’s a nativity set…The single most important piece of advice I would give interfaith families is to let their children decide what they want to believe.”

When in doubt, Parbhoo and her husband lean on the wisdom of Dharmesh’s mother, Sarla.

“We’ve always said there are many paths to the same God,” Sheryl Parbhoo said. “That’s what Grandma believes, and it’s all good.”

We’re asking: Has your family blended traditions to start a brand new holiday tradition? Tell us in the comments below, or tweet to us @newshour using the hashtag #newshourasks.

Left: Interfaith journalist, blogger and author Susan Katz Miller says it is important to her and her family to make space for both the Jewish and Christian holidays her family celebrates rather than blending traditions. Photo courtesy of Susan Katz Miller