Investigators search for cause of deadly cargo plane crash in Georgia

PORT WENTWORTH, Ga. — Military investigators began the arduous task Thursday of answering why a C-130 Hercules cargo plane dropped from the sky to crash on a Georgia highway as families of nine Puerto Rican airmen grieved Thursday over the deaths of an experienced crew killed amid the fiery wreckage.

There were no survivors when the C-130 Hercules transport plunged to the ground near Savannah, Georgia, missing motorists and buildings Wednesday. The plane was long a part of the fleet of Puerto Rico’s Air National Guard and had rescued and resupplied U.S. citizens after last year’s hurricanes. It crashed soon after taking off on what was supposed to have been its final flight.

The crash caused an explosion that scattered debris from the huge aircraft across an area roughly 600 feet (183 meters) in diameter, leaving only the tail section intact amid chunks of debris in the middle of Georgia Highway 21. A military officer told reporters Thursday investigators were on the scene, but he offered no preliminary findings.

“It’s extremely important for us to understand what has happened,” said Col. Pete Boone, vice commander of the 165th Airlift Wing of the Georgia Air National Guard. He said investigators would use “every resource at our disposal to properly identify a cause.”

The aging C-130 was assigned to airmen from the Puerto Rico Air National Guard, and the crash happened as they left Savannah/ Hilton Head International Airport en route to Arizona on what was supposed to be the aircraft’s final flight.

Boone said the plane had received “routine maintenance” while in Savannah. He did not know if the crew made a distress call to air traffic controllers after takeoff.

All nine airmen on board had been confirmed dead, Boone said. The military made their names public Thursday afternoon. 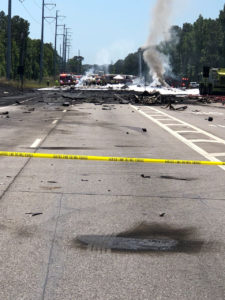 The military plane crash site is seen in Savannah, Georgia, in this picture obtained from social media. Photo by @IAFF574 via Reuters

The pilot was identified as Maj. Jose Rafael Roman, who hailed from the coastal town of Manati along Puerto Rico’s north coast. The mayor of that town, Jose Sanchez, told The Associated Press that Roman had two sons and his wife is five months pregnant with a girl.

“The town is in mourning,” Sanchez said.

Carlos Narvaez, a newspaper sports editor who was Roman’s close childhood friend, told the AP that Roman was nicknamed “Rotor” because he loved all things with a motor that go fast. He said 43-year-old Roman was president of his high school class and worked at a company that manufactured aluminum windows before joining the National Guard in the mid-2000s after graduating as a pilot in Memphis, Tennessee.

In December, Narvaez said Roman raised concerns about the age of the planes they were using.

“He told me, ‘We’re using the oldest planes of the entire United States of America,'” Narvaez recalled.

Jeremy Roman, the pilot’s youngest son, said in a statement that he was extremely proud of his father: “You’re a hero, and you’re my hero, and I want everyone to know I’m very proud of you.”

The plane was being flown into retirement in Arizona, reducing Puerto Rico’s National Guard fleet to five similar planes, two of which need maintenance and aren’t being used, said Adjutant Gen. Isabelo Rivera, commander of the Puerto Rico National Guard.

Though Rivera had initially said the aircraft was more than 60 years old, but Puerto Rico Air National Guard spokesman Maj. Paul Dahlen said Thursday that was a mistake and the plane was manufactured in the early 1970s. That would make it more than 40 years old.

Meanwhile, the military identified the plane’s navigator as Maj. Carlos Perez Serra and its co-pilot as 1st Lt. David Albandoz.

All nine crew members had helped with hurricane recovery efforts as part of the 198th Fighter Squadron, nicknamed the Bucaneros, which flies out of Base Muniz in the northern coastal city of Carolina, Rivera said. The squadron used the plane to rescue Americans from the British Virgin Islands after Hurricane Irma, and later supplied food and water to Puerto Ricans desperate for help after Hurricane Maria.

Left: Smoke rises from the site where a Puerto Rico Air National Guard cargo plane crashed near Savannah, Georgia, in this still image taken from a May 2, 2018, video obtained from social media. Photo by Roger Best via Reuters

How well do we know the pilots who fly our planes?