‘The Invisible War’ Changing the Conversation on Rape in the Military 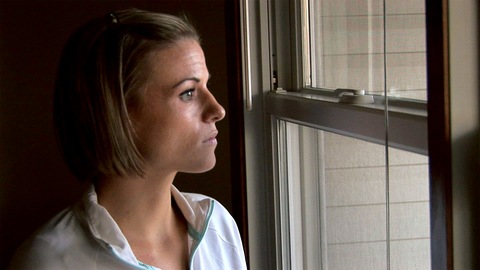 Kori Cioca, a former member of the U.S. Coast Guard featured in the film “The Invisible War,” was denied veteran’s health benefits to cover treatment to her jaw, which she says was broken during a sexual assault by one of her superior officers. Photo courtesy of Cinedigm/Docurama

Lawmakers are paying close attention to a new Academy Award-nominated documentary that exposes a persistent climate of rape within the U.S. military. NewsHour senior correspondent Judy Woodruff talked with a pair of Democrats, along with filmmakers and experts, last week after a screening of “The Invisible War,” in light of a Defense Department estimate that in 2010 more than 19,000 service members were sexually assaulted.

The film, in the running for a 2013 Academy Award for Best Documentary Feature, presents story after story of former servicewomen and men across all branches of the military who say they were sexually assaulted by a fellow service member during the time of their service. The film describes a climate in the military that, in the words of one victim, is designed to help women better deal with the inevitability of getting raped.

Filmmakers Kirby Dick and Amy Ziering interviewed more than 100 former servicewomen and men for the film. It remains to be seen if the filmmakers will take home an Oscar this weekend, nonetheless, the documentary already is making an impact on Capitol Hill.

Two days after he screened the film, outgoing U.S. Secretary of Defense Leon Panetta changed the reporting structure so that a service member’s immediate supervisor no longer is the only person to whom a victim can report an abuse.

“Clearly this film has changed the conversation,” former federal prosecutor and U.S. Sen. Richard Blumenthal told Woodruff, adding that at his request, the military is expected to release more reliable data on sexual assault in the military this spring.

Blumenthal said that he wants to give service women and men the same reporting and legal options as those of civilian victims of sexual crime.

“Although the decision [on who to report the crime to] has been moved, it is still through that structure that the complainant has to go — with all the fears of cultural barriers and career retaliation,” he said.

The film features women who told stories of being raped and sexually abused by fellow recruits and in some cases, by the superior officer to whom they were required to report such incidents. In several cases, unmarried female servicewomen were charged with adultery or fraternization after they reported rape or sexual assault by a married serviceman.

The film also documents the emotional impact of the assaults, including elements unique to members of the military such as the challenge of continuing to serve while seeking justice and obtaining military health benefits for injuries sustained during the assault.

The Feres doctrine, (Feres v. United States, 340 U.S. 135 (1950)), which prohibits members of the military from suing the federal government for injuries sustained while on active duty, complicates their efforts.

In addition to a change in the reporting structure, U.S. Sen. Kirsten Gillibrand, who serves on the Senate Armed Services Committee, said Congress can do more.

“There should be a way for them to report a rape and not worry that they will be brought up on charges themselves,” Gillibrand said. With respect to the Feres doctrine, she said “we may want to look at if we can create some exceptions for victims of sexual assault.”

Both Gillibrand and Blumenthal said that Sen. Chuck Hagel’s (R-Nebraska) plan of action on this issue will have an impact on their decision to vote to confirm him as defense secretary. That vote is expected Feb. 26.

“I asked [Hagel] if he had seen this film and he said yes,” Blumenthal said. “The Congress will hold the military accountable for solving this problem,” he added.

“I need a champion,” Gillibrand said. “I need him to be able to look at each and every man and woman serving in the military as his son and as his daughter….If he is confirmed I will be checking in on him repeatedly to see what he has done and whether he has made these changes.”