Jellyfish, Sea Snakes and Beetles: The Challenges of Hunting for Sea Mines 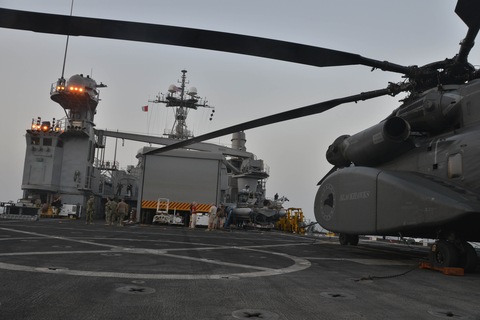 Navy divers use MH-53 helicopters, like this one on board the USS Ponce, to hunt for mines in the Persian Gulf. Photo by Dan Sagalyn/PBS NewHour

PERSIAN GULF — One of the biggest challenges hunting for mines in the Persian Gulf are the creatures in the water. There are sharks, jellyfish and sea snakes, according to Charles Vaillancourt, a Leading Seaman in the Canadian Navy whose specialty is clearance diving.

He was aboard the USS Warrior, an American mine hunting ship participating in the largest exercise ever aimed at finding and neutralizing mines earlier this month.

The U.S. Navy over the past year has beefed up its mine hunting capabilities in the Middle East as tensions with Iran over its nuclear program have risen. Israel has threatened to attack Iran’s nuclear facilities, and Iran has vowed to retaliate by mining the Strait of Hormuz. Twenty percent of the world’s oil flows through the strait, which is only 25 miles wide and is right off of Iran’s southern border. 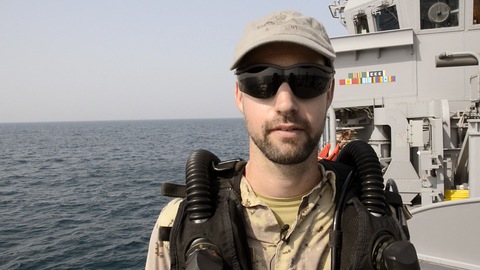 Besides using high tech unmanned submarines equipped with mine detecting sonar and devices dragged from ships and helicopters, which mimic the signatures of large ships and trigger mine explosions, there are also low tech approaches.

When suspected objects are found on the surface of the water, divers are dispatched to check them out, at times jumping out of helicopters and swimming to them. If the object floating in the water is a mine, the divers attach explosives to it. After swimming a safe distance, the mines are blown up.

It’s grueling work. The water is hot, making for an exhausting swim. It involves treks through unfriendly jellyfish and sea snake territory. Twenty percent of the time, suspected mines turn out to be something else entirely. “There is always something there, just not what you were looking for” said Vaillancourt.

Mine hunting is like weeding in the yard, according to Lt. Commander Scott Nietzel, the commanding officer of the USS Warrior. And just like weeds stick out from the grass, so do mines, Nietzel said. But the sea is vast and the number of mine hunting assets is limited. Oftentimes what mine hunters find in the water are refrigerators, dead sheep, and once, even a Volkswagen Beatle, Nietzel said.

Check out more of NewsHour’s coverage in the Middle East: