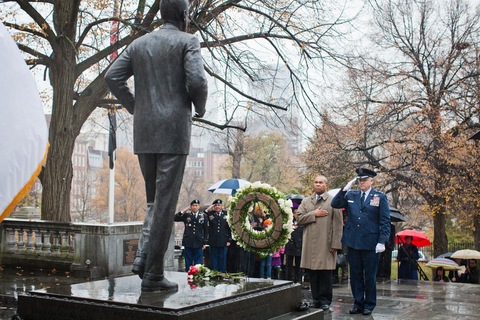 This is how the Commonwealth of Massachusetts chose to immortalize Kennedy in a bronze statue on the grounds of the Massachusetts State House. On the 50th Anniversary of JFK’s assassination, the public has been granted access to the statue for a limited time.

Public access to the statue was closed after 9/11 when security concerns caused the plaza where the statue stands to be closed to visitors, along with other entrances to the statehouse. The site was open for a short time after the passing of Sen. Edward Kennedy, D-Mass., in 2009 and in celebration of the 50th anniversary of JFK’s inauguration in 2011.
While John F. Kennedy did not serve in the Massachusetts State House, he represented the commonwealth in the United States House of Representatives and Senate from 1946 until he was elected to the presidency in 1960. He spoke of his Massachusetts roots at the State House as president-elect in 1961.

In a speech that became known as his own “City on a Hill” address, Kennedy said, “The enduring qualities of Massachusetts – the common threads woven by the Pilgrim and the Puritan, the fisherman and the farmer, the Yankee and the immigrant – will not be and could not be forgotten in this nation’s executive mansion. They are an indelible part of my life, my convictions, my view of the past, and my hopes for the future.”

In a solemn ceremony Friday morning, a wreath was placed at the foot of the statue. The public [will be able to visit] the statue from 10:30 am to 3:00 pm on Friday and Monday as attendees of an official statehouse tour.