The acoustic guitar that Beatles legend John Lennon is thought to have used to record “Love Me Do” and “I Want to Hold Your Hand”, sold at auction on Saturday in California for a record $2.41 million.

The 1962 J-160E Gibson had been lost for more than 50 years until a San Diego musician discovered the guitar in his possession may have historical value. The man, identified as John McCaw, bought it in the late 1960s for $275 without knowing that it had been stolen from Lennon several years earlier, auctioneer, Darren Julien said.

“John so loved this particular guitar that he would take it home and write songs on it with Paul McCartney,” the auction house said in a statement. 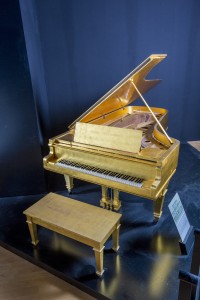 “No other guitar ever offered at auction can compare to the history this guitar has with The Beatles’ John Lennon. It can be seen in the November 22, 1963 videos of ‘I Want to Hold Your Hand’ and ‘This Boy.'”

Beatles’ instruments expert Andy Babiuk determined the guitar’s authenticity by matching its serial number, wood grain and other unique markings to the one Lennon used by comparing it to photographs and film footage of Lennon playing it.