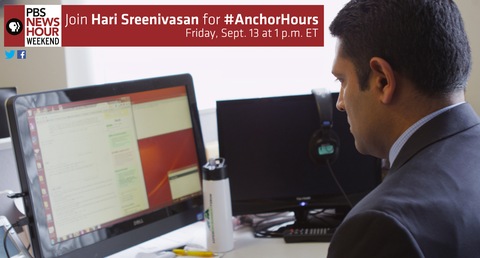 Last weekend, NewsHour Weekend debuted on stations across the country on Saturday and Sunday.

William will discuss his upcoming broadcast segment, which looks at the recent changes to drunken-driving laws in British Columbia that have led to a roughly 50 percent decrease in alcohol-related fatalities. Could such reform be effective in the United States?

Hari will also respond to your questions about the new show. Want further explanation about pieces you saw on air last week? Wondering what kind of topics will be covered on future programs? Weigh in on these and other questions 1p.m. EDT Friday.

Watch the conversation below at 1 p.m. EDT Friday.