A federal judge says the government did not adequately review the environmental impact of the Dakota Access Pipeline before allowing it to move forward earlier this year, giving the Standing Rock Sioux tribe and other environmental activists their first legal victory in the monthslong fight over the controversial project.

In his ruling, U.S District Judge James Boasberg of Washington, D.C. said the U.S. Army Corps of Engineers “did not adequately consider the impacts of an oil spill on fishing rights, hunting rights, or environmental justice, or the degree to which the pipeline’s effects are likely to be highly controversial” when the agency approved permits for its completion.

The judge’s decision, however, does not lead to an abrupt cease of operations for the 1,170-mile pipeline, which started transporting barrels of oil in June. Boasberg, instead, has asked the Corps to provide greater explanation for its decision to issue the permits in a status hearing scheduled for next week. The tribe will also present its arguments, including a request to shut down the pipeline immediately.

The judge’s decision, however, does not lead to an abrupt cease of operations for the 1,170-mile pipeline, which started transporting barrels of oil in June.

David Archambault II, chairman of the Standing Rock Sioux, applauded the judge’s decision, calling it a “major victory for the Tribe.”

“We commend the courts for upholding the law and doing the right thing,” he added.

Archambault said in a statement that the previous administration has “painstakingly considered the impacts of this pipeline,” while President Donald Trump’s administration “hastily dismissed these careful environmental considerations in favor of political and personal interests.”

Last year, the project became a flash point in the indigenous and environmentalist movement to protect tribal land and natural resources. For months, activists protested along the final leg of the pipeline, as owner Energy Transfer Partners pushed for final permits to tunnel beneath the federally protected Lake Oahe on the Missouri River in North Dakota.

The company, in past statements, has said the project would mean a “more direct, cost-effective, safer and more environmentally responsible” pipeline.

The Standing Rock Sioux tribe and other opponents of the pipeline have argued that the project’s close proximity to the tribe’s reservation puts the main water supply and sacred sites at risk. Energy Transfer has said those claims are false.

Former President Barack Obama intervened at the tail-end of his presidency and halted the construction of the pipeline, ordering an environmental impact statement to assess risks involved with the pipeline.

But when President Donald Trump took office, the White House’s position changed, a point the judge specifically noted in his 91-page decision: “As we all know, elections have consequences and the government’s position on the easement shifted significantly.”

In January, Trump dropped the Obama-sanctioned study and signed an executive order to expedite the construction of the Keystone XL and the Dakota Access pipelines, speeding up the Corps’ final approval of permits.

“The process is so long and cumbersome that they give up before the end. Sometimes it takes many, many years and we don’t want that to happen,” Trump said at the time. 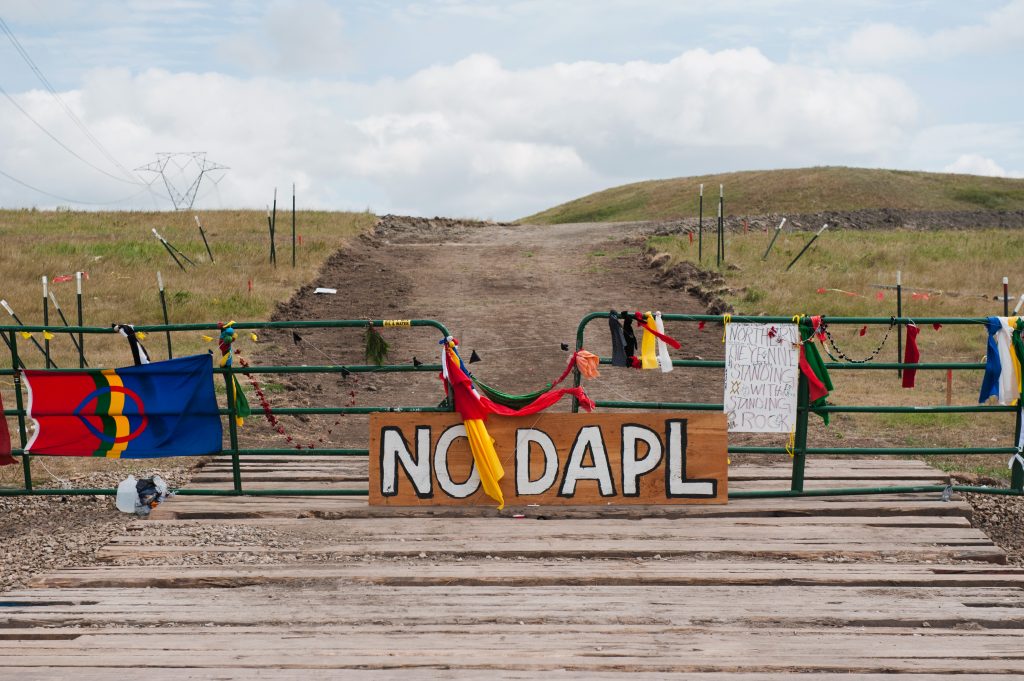 Signs left by protesters demonstrating against the Energy Transfer Partners Dakota Access oil pipeline sit at the gate of a construction access road where construction has been stopped for several weeks due to the protests near the Standing Rock Sioux reservation in Cannon Ball, North Dakota. Photo by Andrew Cullen/Reuters

Energy Transfer Partners, in a statement to NewsHour, echoed the part of Boasberg’s decision that said the Corps complied with the National Environmental Policy Act.

“It is important to note that while Judge Boasberg asked the Corps to provide greater substantiation for its conclusions, the Court did not find the prior determinations to be erroneous,” Lisa Dillinger, a spokeswoman for the company, said.

“Per the Court’s order, there will be further briefing on whether the Corps’s determinations should continue or be vacated while the Corps reconsiders the issues on remand,” Dillinger said, adding that the company believed the record supports the fact that the Corps properly evaluated both issues.

Left: Members of the Standing Rock Sioux Nation and Indigenous leaders participate in a protest march and rally in opposition to the Dakota Access and Keystone XL pipelines in D.C. Photo by Kevin Lamarque/Reuters