A white man who fatally shot Indian national Srinivas Kuchibhotla and wounded two other men at a restaurant in northeastern Kansas last year has been sentenced to life in prison, federal prosecutors announced Tuesday.

Witnesses said the gunman, Adam Purinton, angrily confronted Kuchibhotla and another Indian national Alok Madasani at an Austin’s Bar & Grill in Olathe, Kansas, yelling “Get out of my country!” Purinton then shot eight rounds inside the restaurant, killing Kuchibhotla and wounding his friend Madasani. A third man, identified as Kansas resident Ian Grillot, was also shot after he tried to stop Purinton outside the bar.

Before shooting, Purinton reportedly asked the men, who he thought were Iranian, about their immigration status. When he was located by police, at a bar more than 80 miles away from the crime scene, he told officers he had killed “two Middle Eastern men.”

In May, Purinton agreed to a plea deal that recommended the maximum sentence of life imprisonment without the possibility of parole for the hate crime and firearm offenses against him. In turn, prosecutors agreed to not pursue a death sentence.

“No matter who you are, what you believe, or how you worship, you should be able to live without fear of becoming a victim of hate crimes, We hope today’s sentencing brings some closure for the victims and their families,” U.S. Attorney Stephen McAllister for the District of Kansas said Tuesday in a statement.

The new sentence comes on top of a separate life sentence given to Purinton after he pleaded guilty to state charges of murder and attempted murder. All the counts are to be served consecutively, according to court documents.

Here’s what else we know.

Prosecutors have pointed to an earlier incident weeks before the shooting 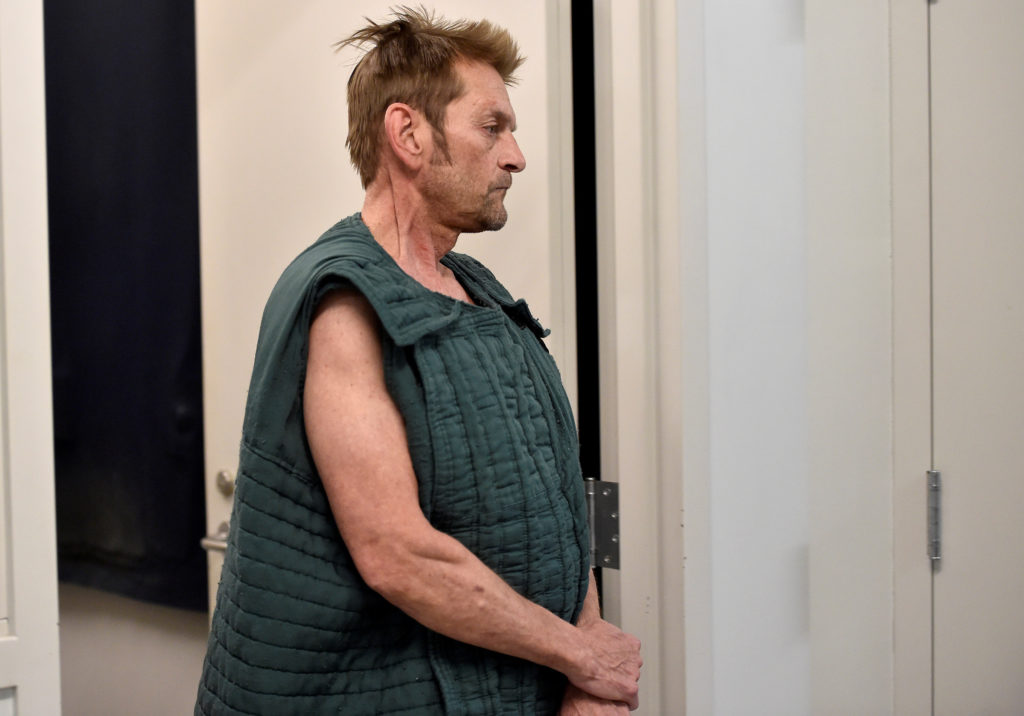 Adam Purinton, 51, accused of killing Srinivas Kuchibhotla, 32, and wounding Alok Madasani, 32, as well as an American who tried to intervene, appearing via a 2017 video conference from jail during his initial court appearance in Olathe, Kansas. Photo by Jill Toyoshiba/The Kansas City Star via Reuters

In its statement today, the Justice Department said that Purinton “admitted in open court” at his federal guilty-plea hearing months ago “that he targeted and shot Kuchibhotla and Madasani because of their race, color, and national origin.”

In a statement from the department in May, prosecutors also pointed to a separate incident weeks before the shooting. Purinton happened to be at Austin’s Bar & Grill at the same time as Kuchibhotla and Madasani, sitting by himself in the bar area while the two Indian men were having a drink on the patio. All three were known to frequent the restaurant after work.

“Noticing the two men, Purinton commented to a regular sitting at the bar, ‘Did you see the terrorists on the patio?'” according to the statement.

How did the shooting happen?

On the evening of Feb. 22, 2017, Purinton was sitting by himself on the front patio of Austin’s Bar & Grill. Kuchibhotla and Madasani were also sitting nearby. He then approached to two men, demanding to know their immigration statuses.

“Out of the blue comes this weird-looking gentleman, I say weird-looking because he had anger on his face,” Madasani, 32, later told The New York Times. “I did not hear what he was saying instantly, but I saw the look on Srinivas’s face change drastically. I looked at Adam and he walked towards me, he came to me and said, ‘Are you here legally?’”

According to DOJ, Purinton poked Kuchibhotla in the chest, calling him a “terrorist” and other racist epithets. Witnesses at one point heard Purinton shout: “Get out of my country!”

Ian Grillot, 24, and another bar patron interceded and escorted Purinton out of the bar.

“Everybody kept coming up to us saying ‘This is not what we represent, you guys belong here.'”

“Everybody kept coming up to us saying ‘This is not what we represent, you guys belong here,’” Madasani recounted for the Times, saying that other patrons assured them that he and his friend were welcomed at the bar.

Purinton, however, drove home to retrieve a semi-automatic pistol. He changed into a different shirt and wore a blue and white scarf, all in an effort to “disguise his identity,” the DOJ said.

About 30 minutes later, he returned and shot eight rounds at Kuchibhotla and Madasani on the patio. Four of the bullets struck Kuchibhotla, who later died from his injuries. Madasani was shot once, but survived.

As Purinton fled the scene, Grillot tried to catch him. Purinton shot Grillot, who also survived the attack.

After the shooting, Purinton “stated over the phone to a friend, and later in person to a bartender, that he had just killed some Iranians,” the DOJ said. 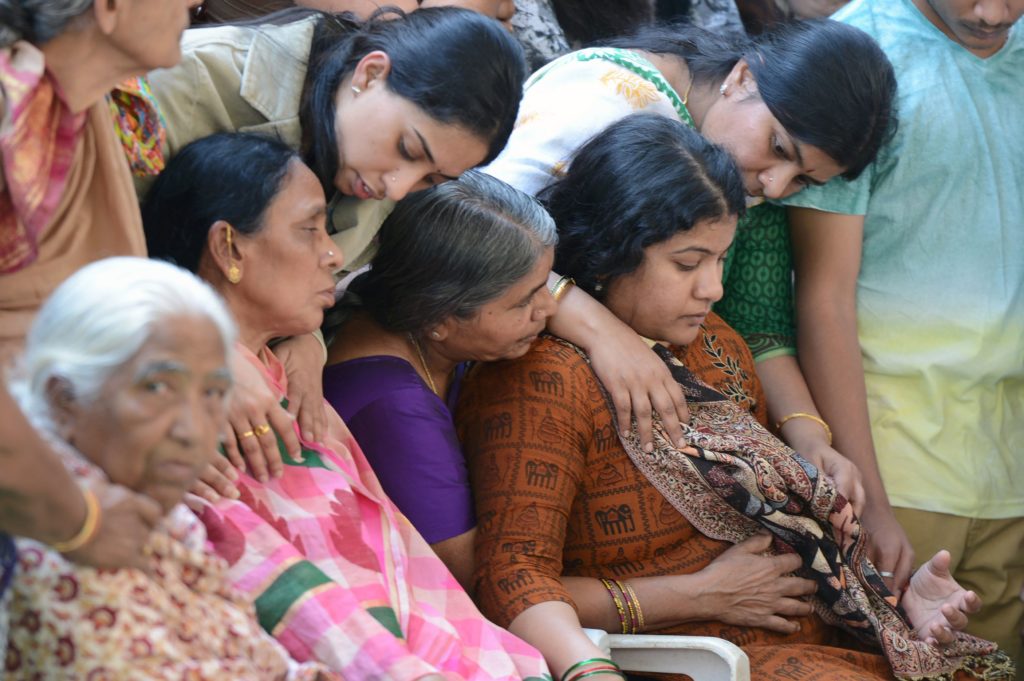 Sunayana Dumala (R), wife of killed Indian engineer Srinivas Kuchibhotla, who was shot dead in the US state of Kansas, is consoled by family members prior to performing the last rites at his funeral in Hyderabad, in February 2017. Photo by Noah Seelam/AFP/Getty Images

The attack raised concerns about anti-immigrant sentiment in the U.S. and even caught the attention of Indian officials. They and local media wondered if America was a safe place for Indians.

Sunayana Dumala, Kuchibhotla’s widow, addressed this in court today via a statement that was read by a prosecutor. Dumala wrote that it was “extremely painful” to face the gunman. She did address Purinton directly in the statement:

“If you could have kept your anger inside and spoke to my husband softly, Srinu would have been more than happy to share his background and help you understand that not every brown skinned person is suspicious or evil, but kind, smart and contributing to America,” she wrote. “Instead you chose to rage and bully in anger and when you were stopped, you decided to take their lives,” she added.

None of the victims were present for the sentencing, The Kansas City Star reported.

In a video produced by the Star after Purinton’s sentencing in May, Dumala said the “murder of my husband will not bring back Srinu to me, but it will send out a very strong message that hate is never acceptable.”

“While we cannot undo the irreparable harm that this defendant has done, some measure of justice for the victims’ families has been achieved. Such hateful crimes will remain a priority for the Department of Justice,” he said.

Left: A picture of Srinivas Kuchibhotla, an immigrant from India who was recently shot and killed in Kansas, is surrounded by roses during a March 2017 vigil in honor of him at Crossroads Park in Bellevue, Washington, D.C. Photo by David Ryder/Reuters