WASHINGTON — President Donald Trump abruptly fired James Comey as director of the FBI in the midst of the law enforcement agency’s investigation into whether Trump’s presidential campaign was connected to Russian meddling in the election.

In a letter to Comey, Trump said the dismissal was necessary to restore the public’s trust and confidence.

Often lauded for his independence, Comey had come under intense scrutiny in recent months for his role in the agency’s investigation into the email practices of Trump’s opponent, Democrat Hillary Clinton, including a pair of letters he sent to Congress on the matter in the final days of last November’s election.

A look at key moments in Comey’s tenure and the lead-up to Trump’s decision to fire him.
___

Sept. 4, 2013: Comey is sworn in to office as the seventh director of the FBI. He was nominated for the post by President Barack Obama and confirmed by the Senate.

July 5, 2016: Holds news conference to announce that “no reasonable prosecutor” would bring criminal charges against Hillary Clinton, the Democratic presidential candidate, over her email practices as secretary of state, but criticizes Clinton and her staff for being “extremely careless” in their handling of classified material.

July 5, 2016: Republican presidential candidate Donald Trump calls the FBI’s decision not to bring criminal charges against Clinton the greatest example yet that the system is “rigged.”

July 7, 2016: Comey vigorously defends the decision not to prosecute Clinton over her use of a private email server as secretary of state. Under an onslaught of Republican criticism, Comey says that to charge Clinton would have been unwarranted and mere “celebrity hunting.” 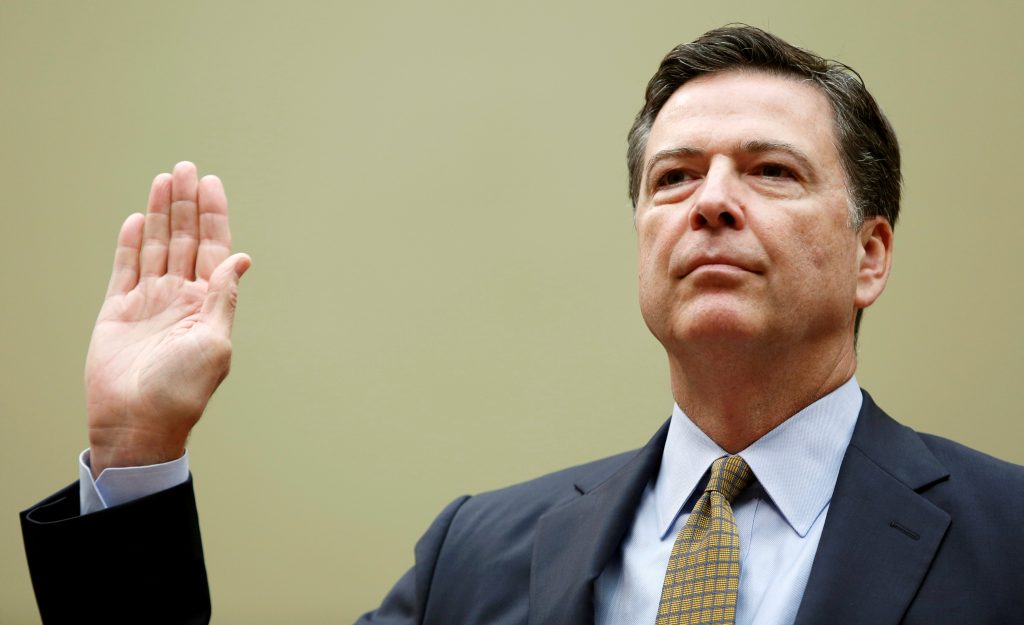 FBI Director James Comey is sworn in before testifying at a House Oversight and Government Reform Committee on the “Oversight of the State Department” on July 7. Photo by REUTERS/Gary Cameron.

Did Clinton get off easy? House committee grills FBI’s Comey

Oct. 28, 2016: Days before the election, Comey informs Congress by letter that he was reopening the investigation into Clinton’s email practices based on new evidence, citing the discovery of emails on a laptop used by a top Clinton aide. Justice Department officials warned Comey against sending the letter, saying that doing so would be inconsistent with department policy meant to avoid the appearance of prosecutorial interference or meddling in elections.

Oct. 28, 2016: Trump reacts to FBI’s decision to investigate new messages related to Clinton’s emails, telling a campaign rally that he has “great respect for the FBI for righting this wrong.”

Nov. 6, 2016: Comey tells Congress in a follow-up letter that a review of newly discovered Clinton emails has “not changed our conclusions” that she should not face criminal charges.

Nov. 6: Trump criticizes Comey’s second letter to Congress, saying Clinton was being protected by a “rigged system” and pronouncing her “guilty,” despite the FBI’s conclusion that criminal charges were unwarranted.

Nov. 12, 2016: During a telephone call with top campaign donors, Clinton blames Comey for her defeat by Trump. Clinton said her campaign was on track to win the election until Comey sent the letter to Congress on Oct. 28.

Jan. 6, 2017: Comey is among a group of four top U.S. intelligence officials who briefed then-President-elect Donald Trump on their conclusions that Russia meddled in the presidential election on his behalf. Trump told The Associated Press by telephone after the meeting that he “learned a lot” but declined to say whether he accepted their conclusion about Russia.

Jan. 22, 2017: Two days after taking office, Trump appears to single out Comey at a White House reception to thank law enforcement officers and others that helped during the inauguration. Trump called Comey over to where he was standing in the Blue Room to offer a handshake and a partial hug, then commented that Comey has “become more famous than me.” 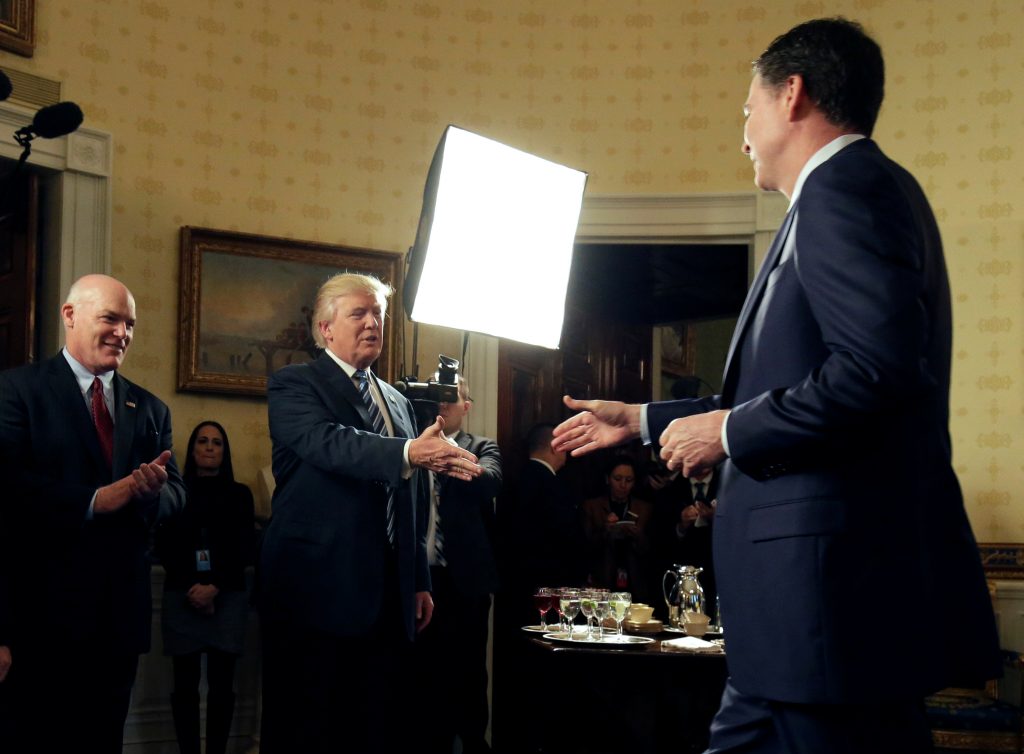 March 8, 2017: During a cybersecurity conference at Boston College, Comey said he planned to serve his entire 10-year term, quipping, “You’re stuck with me for another 6½ years.”

March 20, 2017: Comey testifies to Congress that the FBI has been investigating possible links between Trump associates and Russian officials since July, the same month he held an unusual news conference to discuss the investigation into Clinton. Comey had previously refused to acknowledge the parallel Trump investigation, and his disclosure enrages Democrats who already blamed Comey for costing Clinton the presidency.

March 20, 2017: Comey testifies at the same hearing that the FBI and Justice Department have no information to substantiate Trump’s unsubstantiated claim on Twitter that former President Barack Obama wiretapped him before the election.

May 2, 2017: Clinton again lays part of the blame for losing the election on Comey’s Oct. 28 letter. “If the election were on Oct. 27, I would have been your president,” she tells a women’s luncheon in New York.

May 3, 2017: Testifying before the Senate Judiciary Committee, Comey insists that he was consistent in his handling of the separate investigations into Clinton and Trump. Comey also said it made him feel “mildly nauseous” to think his actions in October might have influenced the election outcome. But he told senators: “I can’t consider for a second whose political futures will be affected and in what way. We have to ask ourselves what is the right thing to do and then do it.” 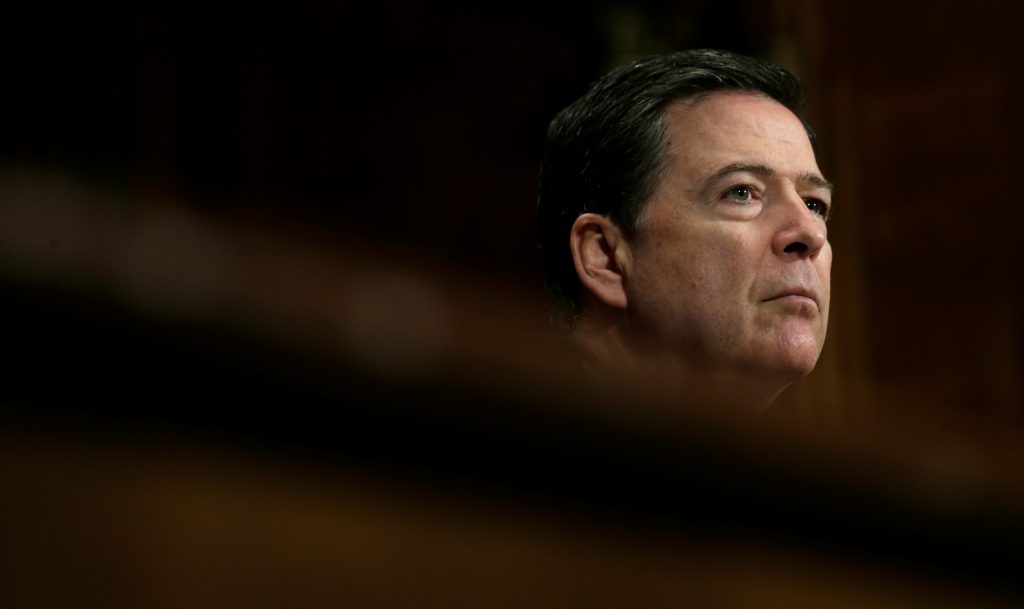 FBI Director James Comey testifies before a May 3 Senate Judiciary Committee hearing on “Oversight of the Federal Bureau of Investigation” on Capitol Hill in Washington, D.C. Photo by REUTERS/Kevin Lamarque.

May 9, 2017: Comey sends Congress a letter correcting his prior sworn testimony regarding emails handled by longtime Clinton associate Huma Abedin. Comey had told Congress that Abedin had sent “hundreds and thousands” of emails to her husband’s laptop, including some with classified information. The two-page, follow-up letter said that, in fact, only “a small number” of the thousands of emails found on the laptop had been forwarded there while most had simply been backed up from electronic devices.

May 9, 2017: Trump abruptly fires Comey. “It is essential that we find new leadership for the FBI that restores public trust and confidence in its vital law enforcement mission,” Trump states in a letter addressed to Comey.

Left: FBI Director James Comey testifies before a House Oversight and Government Reform Committee on the "Oversight of the State Department" in Washington, D.C. President Donald Trump abruptly fired James Comey as director of the FBI in the midst of the law enforcement agency's investigation into whether Trump's presidential campaign was connected to Russian meddling in the election. Photo by Gary Cameron/Reuters