What we know – and don’t know – about the Oregon shooting

UPDATE (Oct. 3): The shooter behind Thursday’s attack on a community college in Oregon died from a self-inflicted gunshot wound, Douglas County Sheriff John Hanlin said at a press conference Saturday.

The sheriff said the 26-year-old Chris Harper Mercer killed himself as officers arrived. Officials had previously said the shooter was killed in an exchange of gunfire with police. 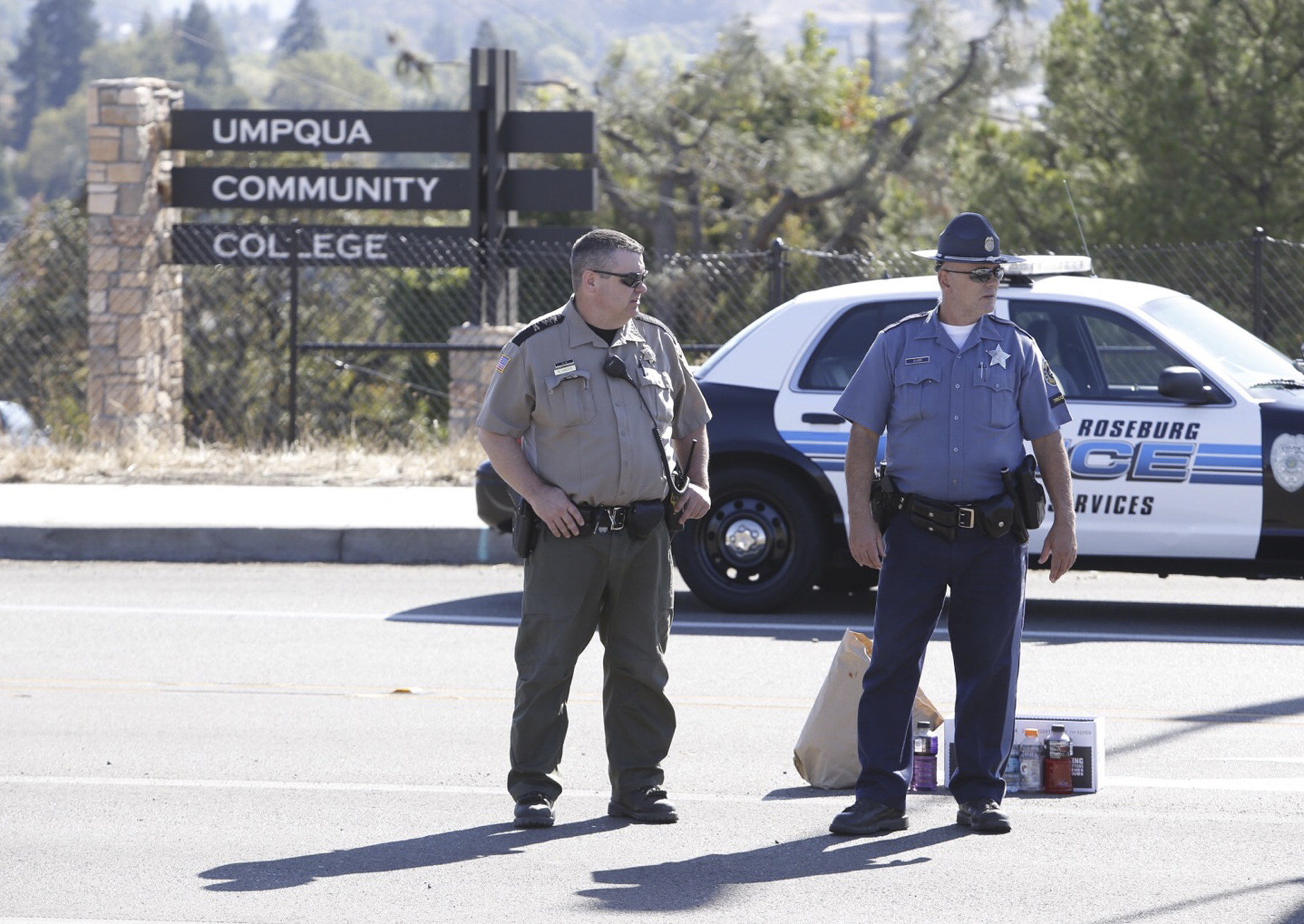 Police officers stand guard near the site of a mass shooting at Umpqua Community College in Roseburg, Ore., on Oct. 1, 2015. A gunman opened fire at UCC, killing at least nine people before he was shot to death by police in a shootout. Photo by Steve Dipaola/Reuters

On Friday, authorities released the names of the nine people that died in the Roseburg, Ore. shooting. Their ages ranged from 18 to 67 years old. Among the victims are a 67-year-old teacher and several freshmen students.

Hospital officials said Friday that four of the nine injured shooting victims at Oregon’s Mercy Medical Center are expected to survive after a gunman opened fire during a writing class at Umpqua Community College on Thursday, killing nine people.

Douglas County Sheriff John Hanlin clarified that the actual number of people injured was nine. The gunman, who was identified as 26-year-old Chris Harper Mercer, died after a shootout with police. Late Friday, the AP reported that Mercer was a student enrolled at the college.

A motive for the shooting remained unclear. Investigators believe he may have been a student at the college, because a receipt found at the scene showed he purchased textbooks from the campus bookstore two days earlier, according to the Associated Press.

Hanlin told reporters in Roseburg, Oregon, Friday that the medical examiner is expected to release the shooter’s name later in the day.

“You will not hear anyone from this law enforcement operation use his name.” he said, reinforcing his message from Thursday night that the media not place emphasis on the shooter.

Celinez Nunez of ATF told reporters Friday that 13 firearms were recovered in total, 6 from the scene of the shooting and 7 at the gunman’s residence. Nunez added that all the firearms were purchased legally.

Ian Mercer, father of the gunman, told reporters outside his home in Tarzana, California, late Thursday that he had been talking to the FBI and other authorities about the shooting.

He did not answer questions about the shooting of his son.

“Shocked is all I can say,” the father told reporters. “It’s been a devastating day.” 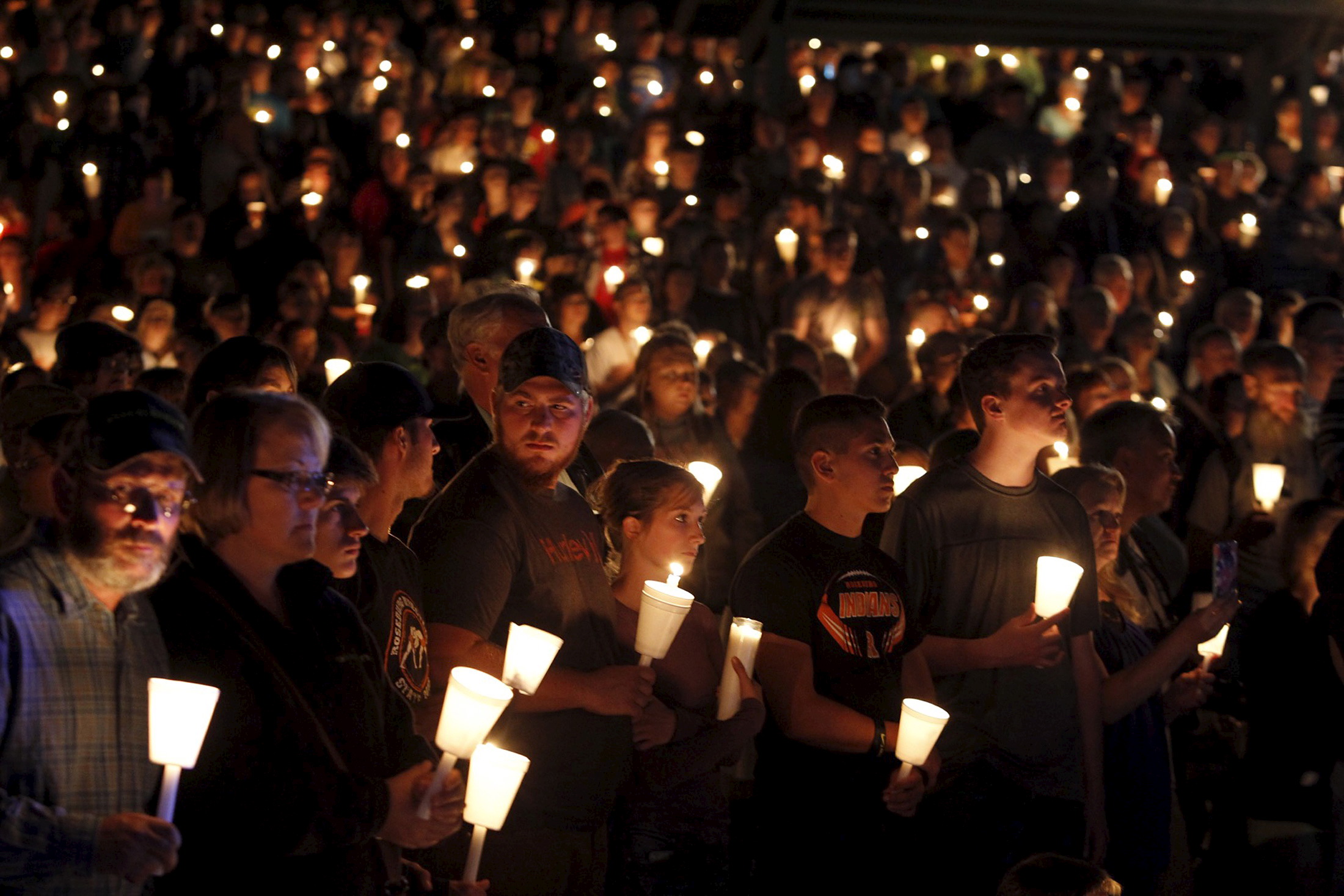 Local residents gathered at a park in Roseburg for a candlelight vigil for the victims of the shooting Thursday night. The town previously experienced a school shooting in 2006 when a Roseburg High freshman shot another student four times in the back with a semiautomatic pistol, The Oregonian reported.

According to The New York Times, the Roseburg shooting, added to this year’s list of more than 40 school shootings, was the first “major mass casualty incident at a school this year.” 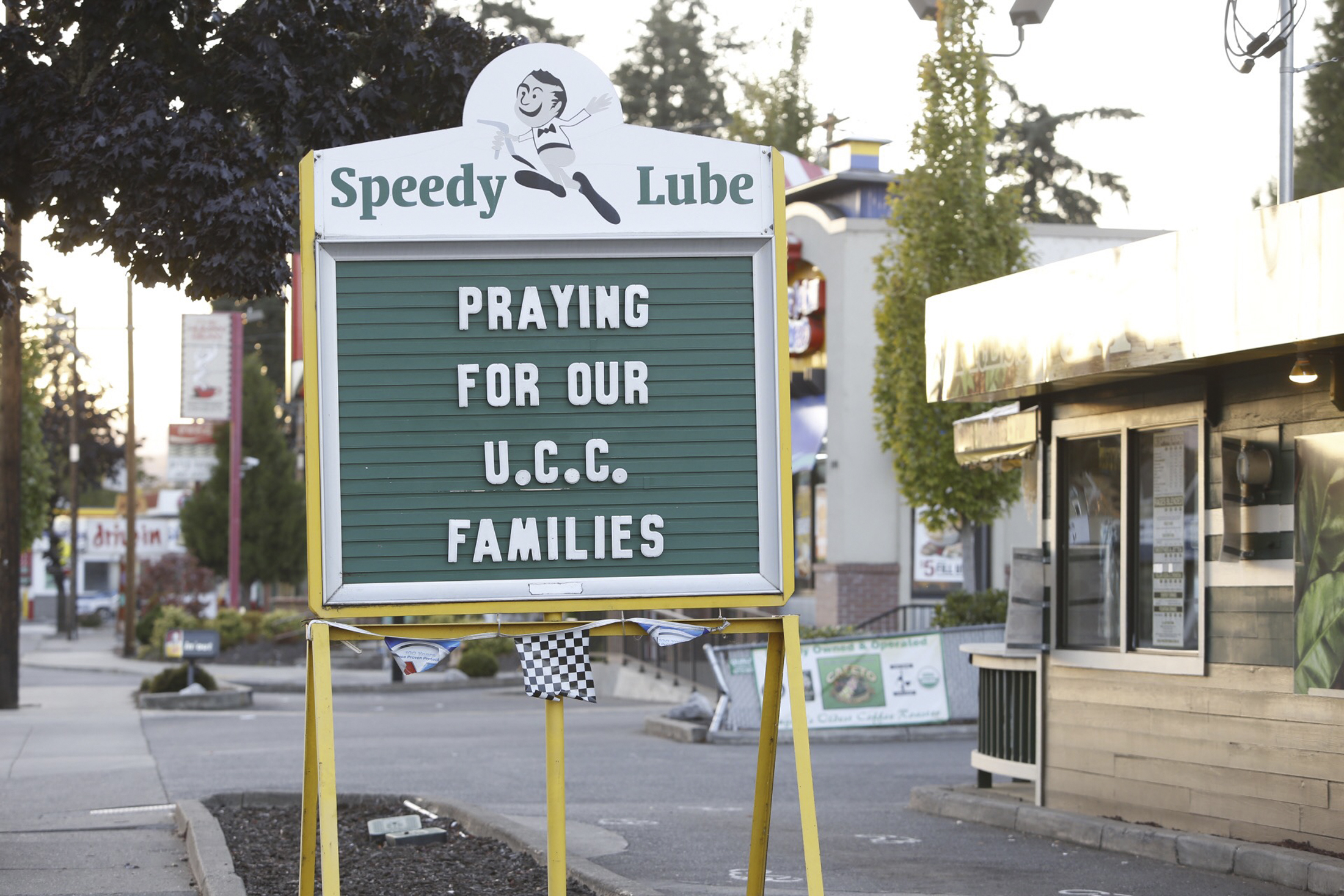 President Barack Obama expressed frustration when he addressed the Roseburg shooting Thursday, saying the response to such incidents has became routine and that the nation has become numb to gun violence.

The Obama administration proposed changes to gun control legislation after the Newtown, Connecticut shooting in 2012, when 26 people, including 20 children, were gunned down at an elementary school. But efforts stalled in Congress.

“I hope and pray that I don’t have to come out again during my tenure as president to offer my condolences to families in these circumstances,” Mr. Obama said. “But based on my experience as president, I can’t guarantee that. And that’s terrible to say.”

First reports of the shooting at Umpqua Community College appeared at 10:38 a.m. Thursday on the fourth day of classes. According to several witness accounts, the shooting took place in Classroom 15 in Snyder Hall.

Armed with three pistols, a rifle and five additional magazines, Mercer died after he exchanged gunfire with at least two police officers who responded to the 911 reports within minutes, Hanlin said.

By Thursday afternoon, police officials sealed off Mercer’s apartment complex in the nearby community of Winchester. Bronte Hart, 21, one of Mercer’s neighbors, told the Associated Press that he “seemed really unfriendly.”

Searching for a motive, federal officials said they were examining an online conversation on the anonymous web forum 4chan to determine whether it was was linked to the gunman, according to a New York Times report. In one message thread, a writer said, “Don’t go to school tomorrow if you are in the Northwest.”

But messages on 4chan have a history of being false and misleading, and the writers are not required to identify themselves. The writer in this case was labeled “Anonymous.”

An excerpt of a 4chan message thread that FBI officials are examining for any possibly links to the gunman responsible for Thursday’s shooting in Roseburg, Ore.

Hanlin, the most visible law enforcement official in the aftermath of Thursday’s shooting, has opposed changes to state and federal legislation on gun control. In a Jan. 15, 2013 letter he sent to Vice President Joe Biden, Hanlin said he and his deputies would not enforce any new gun-control restrictions “offending the Constitutional rights of my citizens,” Mother Jones reported.

“Gun control is NOT the answer to preventing heinous crimes like school shootings,” Hanlin wrote.

Rita Cavin, interim UCC President, told the AP that the college has a no guns on campus policy and didn’t employ armed security officers.

However, students are allowed to carry guns on campus if they have the proper permits, CBS reported.