The grand jury’s announcement comes three weeks after Mosby filed criminal charges against the officers. Gray died a week after sustaining a fatal spinal injury while in police custody. The officers will be arraigned on July 2, Mosby said.

Updated May 1, 12:38 p.m. | Maryland’s state attorney said Friday there was enough evidence to support criminal charges against six Baltimore police officers in the April 19 death of Freddie Gray, the 25-year-old black man who sustained a fatal spinal injury while in custody.

Updated April 30, 9:07 a.m. | According to police documents obtained by the Washington Post, a prisoner who was sharing the transport van with Freddie Gray stated he could hear Gray “banging against the walls” of the van and that he thought Gray “was intentionally trying to injure himself.”

According to the newspaper, it is not clear if there is any other evidence to backup this prisoner’s statement, written by a Baltimore police investigator. This information, published Wednesday by the Post, adds a new narrative in Gray’s mysterious death.

At some point during 30-minute ride in a police van on April 12, Gray, a 25-year-old black man, sustained a severe spinal injury before reaching Central Booking. Gray would die a week later from the trauma. But critical details about the arrest and that ride in the van remain unknown. 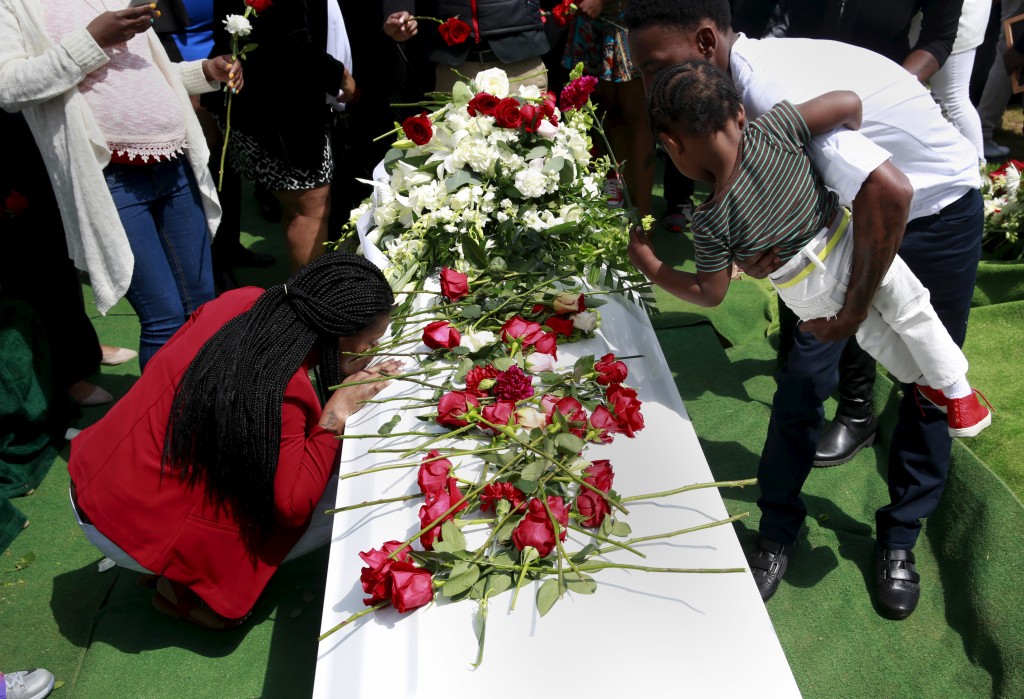 A woman kisses the casket of Freddie Gray, who died following an arrest by the Baltimore police department, at his burial at Woodlawn Cemetery in Baltimore, Maryland on April 27, 2015. Photo by Shannon Stapleton/Reuters

It’s unclear at what point Gray suffered the injury — a severed spinal cord — that would later lead to his death or how exactly that injury occurred. Also unknown is why he was arrested in the first place.

Here’s what we do know.

According to events laid out by the Baltimore Police Department and Deputy Commissioner Jerry Rodriguez, Gray ran from police officers “after making eye contact” with them at 8:30 a.m. on April 12 at the intersection of W. North Avenue and N. Mount Street, an area known for drug dealing. Three police officers — one on foot, two on bicycles — pursued Gray through the West Baltimore neighborhood, eventually stopping him at the 1700 block of Presbury Street. 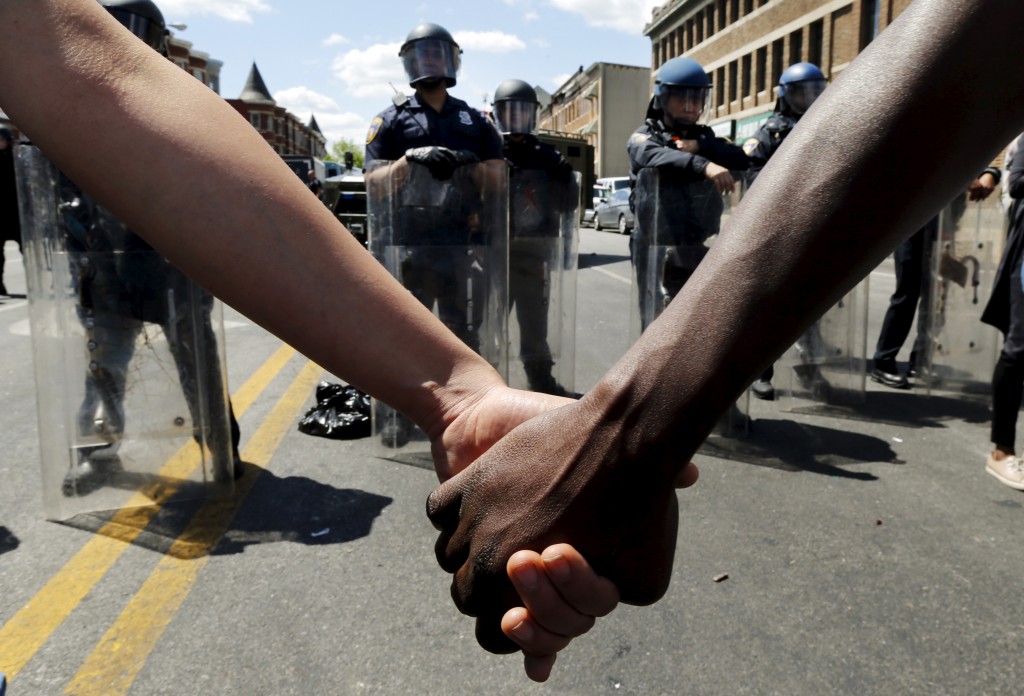 Members of the community hold hands in front of police officers in riot gear outside a recently looted and burned CVS store in Baltimore, Maryland on April 28, 2015. Photo by Jim Bourg/Reuters

Police found a switchblade in Gray’s pockets. Mayor Stephanie Rawlings-Blake later made it clear that Gray wasn’t pursued because of a switchblade. “We know that having a knife is not necessarily a crime,” the mayor said.

Court documents said Gray “fled unprovoked” and was arrested “without force or incident.” At an April 20 news conference, Rodriguez said one officer had taken out a Taser, but that internal records indicated it was not used.

It’s not clear whether Gray’s injuries, which also included a crushed voice box, occurred before or during the van ride, Rodriguez said.

Bystander videos of the arrest show police officers dragging the 145-pound Gray, who’s apparently screaming in pain, to the van.

This CNN report features some of the video captured when Freddie Gray was taken into custody on April 12.

Eyewitness accounts tell a different story, according to people interviewed by the Baltimore Sun. Kevin Moore, a friend of Gray who recorded the arrest, told the Sun that police folded Gray like “a piece of origami.”

An officer had his knee on Gray’s neck, and Gray was “screaming for life,” Moore told the Sun.

Also, before being loaded into the van, Gray had requested his inhaler. The request was ignored.

The van then made two stops before arriving at Baltimore’s Western District station. At the first stop, the driver complained that Gray was “acting irate.” In response, officers stopped the van and put Gray in leg restraints.

At the second stop, officers picked up another suspect who was placed in the back of the van with Gray. The two suspects were separated by a metal barrier that would have prevented any contact, police said.

“[The suspect] could hear Mr. Gray, but he could not see him,” Rodriguez said.

When the van reached the station, officers found Gray unresponsive. A medic was called at 9:24 a.m.

Gray is then transported to the University of Maryland Medical Center Shock Trauma. On April 14 he undergoes surgery on his spine. Gray died at approximately 7 a.m. on April 19. (The Baltimore Sun published a timeline of events.)

“When he was placed inside that van, he was able to talk. He was upset,” Rodriguez said at the April 20 conference. “And when Mr. Gray was taken out of the van, he could not talk, he could not breathe.” 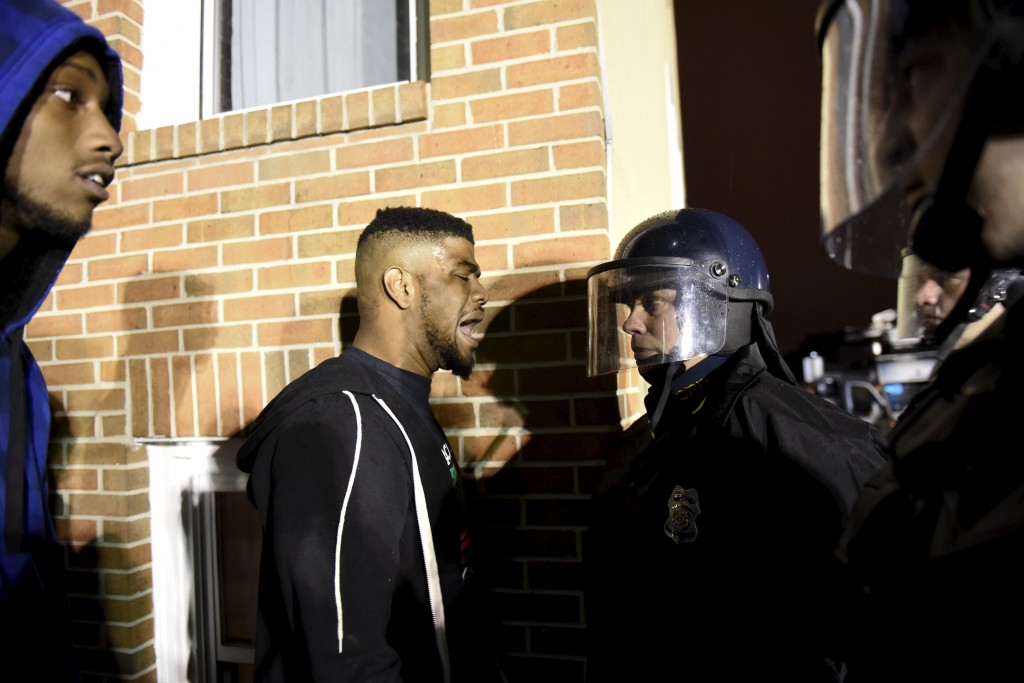 Demonstrators confront law enforcement officers near the Baltimore Police Department’s Western District to protest against the death of Freddie Gray in police custody on April 25, 2015. Photo by Sait Serkan Gurbuz/Reuters

Mayor Rawlings-Blake said at an April 20 news conference that it was clear that whatever happened to Gray “happened inside the van” and that no regulation requires an officer to accompany a suspect in the back of the vehicle.

Days later, at an April 24 news conference, Police Commissioner Anthony W. Batts acknowledged that mistakes were made during and after Gray’s arrest. The police department will issue its preliminary report to prosecutors this Friday, he added. Gov. Larry Hogan said an autopsy conducted by the state medical examiner is also forthcoming.

“We know our police employees failed to get [Gray] medical attention in a timely manner multiple times,” Batts said.

Batts also said there were no excuses for officers to not buckle Gray into his seat. As such, some have speculated that Gray’s injuries were possibly caused by a “rough ride,” an unsanctioned — and illegal — technique.

“By policy, detainees are supposed to be seatbelted and secured inside a van,” The Sun’s Luke Broadwater told the NewsHour, “and anytime an officer drives erratically to try to throw somebody around and injure them, that is intentionally causing harm, and that is not allowed under police procedures.”

The Sun reported that a lieutenant, a sergeant and four other officers have been suspended with pay during the ongoing police investigation. The BPD have yet to specify the officers’ races.

Baltimore police said any evidence from their internal investigation will be turned over to Marilyn Mosby, the state’s attorney. The U.S. Justice Department has also opened a civil rights investigation into Gray’s death.

“I’m deeply troubled by this. We all want to know, but I can’t answer what I don’t know,” Rodriguez said at the April 20 news conference.