After Bin Laden Raid in Abbottabad, the Questions Keep Coming 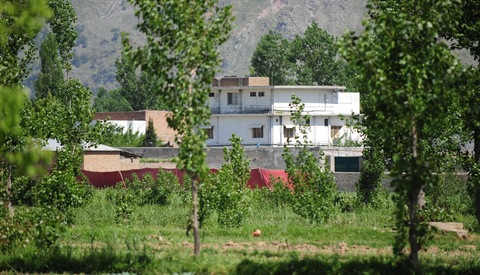 In the age of instant news, when headlines last at most a few hours before being replaced by the next “big story,” the death of Osama Bin Laden has unusual staying power. Ever since word started to leak late Sunday night — first on Twitter, quoting a Congressional aide, then in confirmation from the White House itself — the press corps, Washington, most of the nation and much of the world, has been riveted. The horrific nature of his crimes, the video of the planes flying into the World Trade Center, the reports of phone calls from airplane passengers to husbands and wives as they faced an awful death, the memory of loved ones wandering lower Manhattan for days searching for the lost. Not to mention the jagged face of the Pentagon and the crash scene in Shanksville, Pa. All those memories came rushing back, to give a fresh, raw quality to the news that al-Qaida’s leader had not only been located, he had been shot and killed.

And the questions poured out: how long had the CIA suspected his presence there? (At least 6 months.) How had they discovered him? (Years of painstaking work, tracking down a courier based on a nickname.) If the evidence Bin Laden was in the house was “circumstantial” as White House counter-terrorism adviser John Brennan noted, why had the operation gone forward? Just how risky was this venture, compared to other operations Navy SEALS are used to carrying out? How could Bin Laden have been living in Pakistan without Pakistani officials knowing about it — especially since it was so close to Pakistan’s equivalent of West Point — an elite military training academy? Who else was living in the compound? How many were armed when the raid took place? How much and what sort of resistance did they put up? Why didn’t bin Laden try to escape, or was there no option to do so? What really went wrong with the “stealth” helicopter that U.S. officials said malfunctioned as it reached its destination? If there was only one person inside the compound using a gun – reportedly the courier – why were we first told it was a 40-minute firefight? What were President Obama and secretaries Clinton and Gates and others looking at in the White House Situation Room in that amazing photograph taken as the raid was underway?

Those were questions for the first and second days, but because it was an operation conducted in secret, and because of its success, more questions popped up by the hour: Why weren’t neighbors around the compound in Abbottabad (named after a British major, James Abbott, who helped govern the area when it was part of India in the mid-19th century. See below for a poem Abbott wrote about the city.) Why weren’t they more suspicious of a place with barbed wire, unusually high walls and tinted window glass? Had bin Laden ever emerged on the outside, with or without any sort of disguise? Why had the myth persisted so long that he was living in a cave or another remote, rugged location, when he was actually living comfortably in a city just 30 miles from Islamabad? What sort of material did the Navy SEALS, who pulled off the raid, take away? What has happened to bin Laden’s three wives who reportedly were in the house at the same time, including the youngest, who was with him when he was found? (They’re reportedly in custody of Pakistani security.) What sort of information are they providing? (One is saying bin Laden had been living in the house for at least five years.) How could bin Laden have been operationally directing the al-Qaida network if he had to rely on couriers traveling on foot to make contact with those on the outside?

Of course, the answers to many of these questions are emerging in a flood of news reports – reporters working overtime to get what details they can from their sources.

But still, new questions keep coming: How embarrassing is this episode for the Pakistani government – the fact that U.S. forces could swoop into their country and conduct such a daring operation without their knowledge? (This and the question of whether anyone in the Pakistani government knew that bin Laden was living in their midst, are under investigation, according to Pakistani officials.) How will U.S. relations with Pakistan change as a result, at a time when our country relies on Pakistan to help fight Taliban insurgents in Afghanistan? Will Congress want to reduce the now-billions of dollars in aid this country provides annually to Pakistan? And a different line of questions: Why did the U.S. government — the Obama administration — decide to announce that it had captured a “treasure trove” of documents, computer material, hard drives, thumb drives and other potential valuables from the compound, thus giving al-Qaida a “heads-up” that they have this knowledge, and signaling to them the need to change phone numbers, couriers, codes, plans, etc.? Why not leave them guessing about what was retrieved? In fact, why did the administration feel the need to say much of anything about the operation and what they found? Why not keep more of it secret?

And possibly the most enduring questions: What does bin Laden’s death mean for al-Qaida and its affiliates? How many are mourning his passing, in private, or in the open, as hundreds of Islamist Salafists — a group with fundamentalist beliefs — did Friday in Cairo? Who will take bin Laden’s place at the head of al-Qaida? Where is his second-in-command, Egyptian-born Ayman al-Zawahiri? For that matter, where is former Taliban leader Mullah Omar? Are reports of a split in al-Qaida accurate? Will Bin Laden’s death inspire more young Muslims to join the cause, or will it discourage them from moving toward radicalism? Coinciding with the Arab Spring taking place in Muslim countries across the Middle East and North Africa — will al-Qaida ever be able to pose the threat it once did? Its confirmation Friday morning that its own founder, Osama Bin Laden, was indeed dead was the acknowledgement many didn’t expect. But it was accompanied by a warning that any happiness would soon be replaced by sadness, as it planned to retaliate.

It’s these questions, and scores more still surfacing, that will keep this story alive. Osama Bin Laden in hiding has been such a giant presence in American life for such a long time that his death will continue to fascinate and puzzle us.

Will we ever know everything there is to know about him and his “evil empire,” the term Ronald Reagan once used to describe the Soviet Union? Probably not, and that’s the reason this story will not only outlast the usual short news cycle in American journalism, it’ll keep historians occupied for some time to come.

In the meantime, there is some irony in the lines of the simple poem British Major James Abbott wrote about Abbotabad in 1853, when he left it to return to England:

Via New York Review of Books/Wikipedia

Broadcast journalist Judy Woodruff is the anchor and managing editor of the PBS NewsHour. She has covered politics and other news for five decades at NBC, CNN and PBS.