SEATTLE — Bonnie Brown has photos to remind her of the cabin her parents built in the 1970s near the Stillaguamish River. It was the kind of place that kids dream of.

“It was just a very beautiful place,” she said. “With beaver ponds and streams and meadows and trails through the wood.”

The latest photo of her family’s cabin draws a far less idyllic picture. It’s one of the aerial images taken from above Oso, Wash., after Saturday’s deadly mudslide.

“There’s some grass around the cabin on three sides left but, other than that …” Her voice trails off.

The slide came down from the cliffs across the river, then up the other side, covering the neighborhood.

Brown and her family weren’t at the cabin when the slide occurred. The event made her, like millions of others in the Northwest, all too aware that this is a region prone to landslides.

That’s something that data and maps produced through recent technological advances have been telling scientists, researchers and planners for years. The technology has improved dramatically to gather information about where and when such events are most likely to happen in the future. 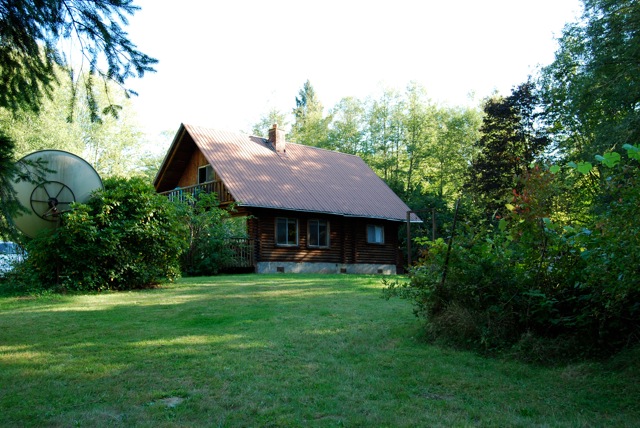 But that doesn’t mean this kind of information is being used to avoid tragedies like the one that hit Washington’s North Cascades.

“It’s public, but whether it gets disseminated to the people who make land-use decisions and planning for geologic hazards doesn’t necessarily happen,” said Dan McShane, a geologist in Whatcom County, Wash.

Given his familiarity with the geology of Stillaguamish region, McShane said he wasn’t surprised when he heard about the landslide.

“The Stillaguamish setting, the geologic units, are particularly sensitive relative to say a real solid granite bedrock somewhere else. So the potential for the failure is much greater,” McShane said.

Towards the end of the last Ice Age, the Stillaguamish River Valley was a giant lake, blocked in by a glacier. It filled with soft lake sediments — sand, clay, gravel, material that falls apart when it’s wet.

And in recent years, scientists have gained a clearer picture of the scars on this landscape.

It looks like a little kid took a toy dumptruck with a backhoe and just moved along the river taking giant clam shell bites out of the slopes. Those bites show where landslides have occurred in the past.

McShane says anyone can look at maps and get information like this if they have some time to surf the web. But even without LIDAR technology and the Internet, recent history might have been instructive when it came to anticipating last weekend’s landslide.

A slide occurred in the same place on the Stillaguamish in 2006, causing flooding.

Snohomish County permitted five new homes to be built there that year and another one in 2009.

The Snohomish County Planning Office said it couldn’t comment as to why those permits were issued because its staff was busy with the recovery effort.

No two counties are the same when it comes to incorporating things like new geological mapping technology into their planning or permitting process.

A lot of that variability stems from money, said Scott Burns, a geologist with Portland State University.

The Washington Department of Natural Resources has maps, although they’re not as detailed as some of the latest 3D imaging.

Some counties, like Cowlitz and Jefferson in Washington, are incorporating new landslide data into their websites.

Burns says there’s a ways to go and the government needs to invest in hazard maps and use them in the permitting process.

Brown said over the years her father and neighbors worried about flooding as the Stillaguamish meandered back and forth across its bed. Landslides weren’t at the top of the list of concerns.

When Brown’s father built the cabin in the 1970s, mapping technology was nothing like it is today.

But technology or not, she has no plans to rebuild.

“The land and what we enjoyed around there is gone and so there’s not the same incentive,” she said. “I don’t know how long it will take for nature to recover but what was really our family’s past is gone now.”

Left: Bonnie Brown's father built the family cabin on the Stillaguamish River in the 1970s. "What was really our family’s past is gone now," she said. Photo by Washington State Department of Transportation