A Los Angeles jury found Led Zeppelin not guilty of copyright infringement on Friday in a court case surrounding the introduction to “Stairway To Heaven.”

The estate of Randy Wolfe, also known as Randy California from a band called Spirit, sued Jimmy Page and Robert Plant in January 2014 because of similarities between his song, “Taurus,” and the introduction to “Stairway to Heaven.”

After less than six hours of of deliberation, the jury said there was not enough of a substantial similarity between the songs to infringe on the copyright, even though the plaintiff had proved Led Zeppelin heard “Taurus” prior to writing Stairway to Heaven. During the weeklong trial, lawyers for the Wolfe estate presented evidence showing Led Zeppelin attended a Spirit concert and that Page owned a recorded copy of Taurus.

The two songs share a common chord progression and bass line that has been used in music for centuries, according to Rolling Stone magazine. The defense presented about a dozen examples of “prior art” from Henry Purcell’s “Dido’s Lament,” to the Beatles’ “Michelle” to the standard “My Funny Valentine,” that relied on the chromatic ‘ground-bass’ pattern of the song.

Both Page and Plant took the stand to describe what they could and could not remember from the 1960s, including whether they had ever heard Spirit perform despite having opened for them. A call to bring Led Zeppelin bassist John Paul Jones as a witness produced a brief reunion of the band’s living members. 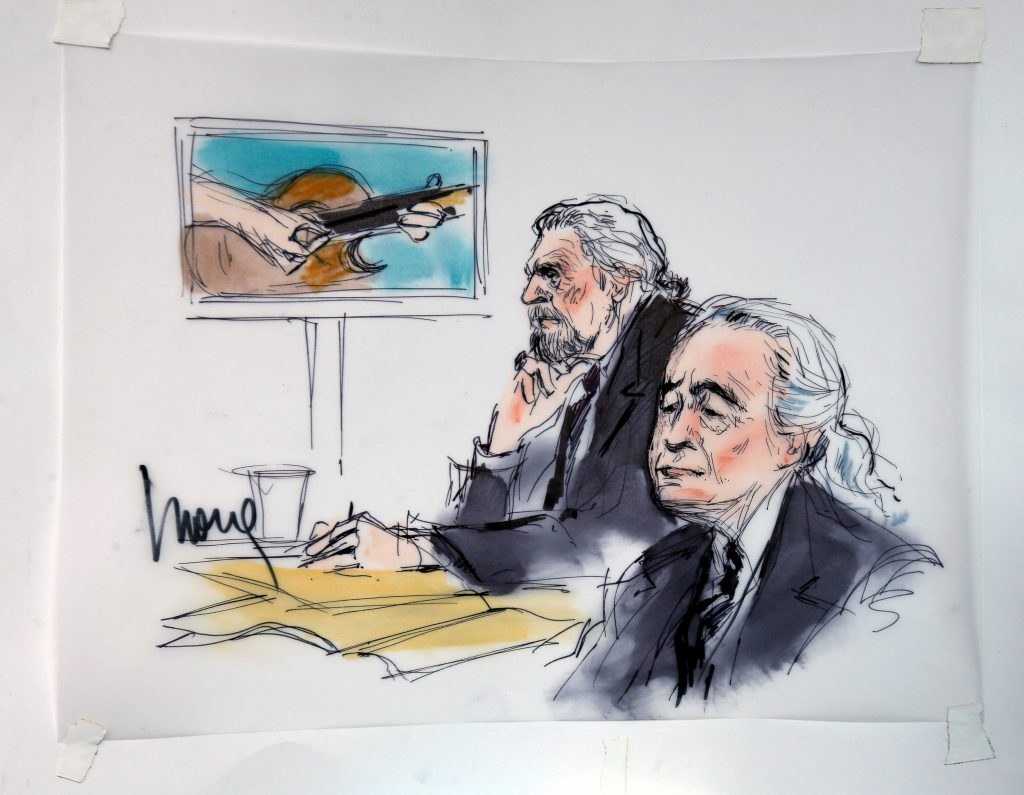 Led Zeppelin singer Robert Plant (left) and guitarist Jimmy Page are shown sitting in federal court for a hearing in a lawsuit involving their rock classic song “Stairway to Heaven” in this courtroom sketch in Los Angeles, California June 14, 2016. Photo by Mona Edwards/REUTERS

The trial featured a colorful lawyer for the plaintiff — attorney Francis Malofiy, whose courtroom theatrics were rebuffed by Judge Gary Klausner. Rolling Stone detailed Malofiy’s antics, such as toting a briefcase modeled after a Fender guitar amplifier or even playing a recording of Mary Poppins “Chim Chim Cher-ee” to mock the defense’s assertion that the chord progression was a common pattern. Judge Klausner, who frequently sustained objections against Malofiy, at one point during the trial asked the attorney, “How many times can you beat a dead horse?”

Since the copyright dispute was over written sheet music, neither commercial recording of “Stairway To Heaven” nor “Taurus” was played for the jury. The defense instead bolstered their argument by calling on musicologists to compare the songs on piano and guitar, along with demo recordings of Page teaching the song to Jones.

“We are grateful for the jury’s conscientious service and pleased that it has ruled in our favor, putting to rest questions about the origins of ‘Stairway to Heaven’ and confirming what we have known for 45 years,” Page and Plant said in a statement after the verdict. “We appreciate our fans’ support, and look forward to putting this legal matter behind us.”

Editor’s Note: An earlier version of this story incorrectly reported that Randy Wolfe presented evidence in the case; the case was argued by lawyers for Wolfe’s estate.