The King of the Blues, B.B. King, died Thursday, May 14, at his home in Las Vegas after suffering from high blood pressure and type 2 diabetes. He was 89 years old. King was one of the most influential blues musicians of all time. The 13-time Grammy Award winner played hundreds of live performances a year, spreading the blues across the nation, and the world.

King came from humble beginnings. He was born in September 1925 to sharecroppers in Mississippi. At a young age both his parents left him to be raised by his grandmother. King worked the crops himself for years before purchasing his first guitar. 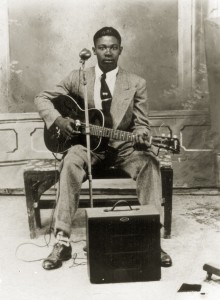 Courtesy of the B.B. King Museum

Raised on gospel music, he began his music career by signing old church songs on the street. In 2005 B.B. King told PBS NewsHour’s Jeffrey Brown why he switched from gospel to the blues:

“I’d sit on the street corner and just start singing gospel songs because that’s what I wanted to do. And generally people would come by me and they would — you know, they would praise me, pat me on the shoulders and the head, and say, ‘Keep it up, son. If you continue, you’re going to be good one day.’ But they didn’t put nothing in the hat. But people that would come by and ask me to play the blues would always put something in the hat. Now you know why I’m a blues singer.”

After some time singing on the street corner King moved to Memphis, Tennessee, where he became a disc jockey and performer at the at the local radio station. He became known as the “Blues Boy” around town — hence “B.B.” His first hit was in 1951, “3 o’clock blues.”

His local popularity began to spread and he toured the country playing to primarily black audiences. That all changed in 1969 when he was asked to tour with The Rolling Stones.

In 1971 he won his first Grammy Award for “The Thrill is Gone” which continued to be a crowd favorite late into his career. B.B. King played the hit song for President Obama a the White House in 2012.

He was inducted into the Blues Hall of Fame in 1980. From the 80s up almost until his death, King enjoyed wide popularity and often performed up to 300 nights a year. He appeared most nights with his famous guitar named “Lucille.” 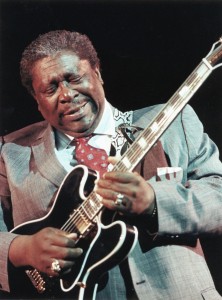 B.B. King performs during a jazz festival in Prague in 1990. Photo by Reuters

He was inducted into the Rock and Roll Hall of Fame in 1987 and won 12 more Grammy Awards spanning across 38 years. He won his last award in 2009 for his traditional blues album “One Kind of Favor.”

King was adamant that the blues are for anyone, not just people down on life.

“People think that because you sing the blues, you’re boo-hoo-hoo. But all our wives don’t leave. We are just like everybody else. We’re people, and to me, blues is life (it) has to do with people, places and things. And as long as we live and there are people, we will have blues,” said King to Jeffrey Brown.

And King lived out spreading the blues to everyone. He played free concerts at festivals including an annual homecoming festival in Mississippi. In 1972 he performed alongside Joan Baez in the Sing Sing Prison concert. When he took the stage he told the audience of inmates that this was a group of people who could truly get the blues. Even late in his career he said that performance remained one of his best.

B.B. King collaborated with artists of all different genres — from his fellow blues artists such as Eric Clapton to rock and roll legends U2. He also influenced many young artists and most recently he could be seen performing alongside pop singer John Mayer.

Though King never wanted to be seen as an idol.

“And it’s the same thing with any instrument. We all have idols. I don’t frown on idols, because all of us need idols. But you want to become yourself. Be yourself,” he told the NewsHour in 2005. “But if I tried to mimic you, then I’d have to do something, you know, differently. Well, it’s the same thing with playing instruments. You play it the way you feel it. You don’t try to mimic him or her or anyone else. You play it as you feel it.”

Though if King had his own idol it may have been Frank Sinatra. He often said that he would play Sinatra’s record “In the Wee Small Hours” every night before going to bed.

He was touched though by the influence he had on artists, especially those who came to music through his songs.

“I’ve had my feelings of doubt in music, to think that there are people that learn to play it by listening to my music, those dark days wasn’t dark after all,” King told former music executive Joe Smith in an interview produced by PBS in the “blank on blank” series:

B.B. King was married twice during his lifetime. Once to Martha Lee Denton (1946-1952) and then to Sue Carol Hall (1958-1966). Both marriages reportedly failed due to the demands of King’s touring career. According to King he has fathered 15 children and had 50 grandchildren.

As King grew older he suffered from type II diabetes. It didn’t stop him from playing, but he began perform seated later in his career. He became an awareness advocate for diabetes. He even appeared in a series of commercials for Ultra One Touch alongside American Idol winner Crystal Bowersox.

King was hospitalized twice in 2015 because of complications from high blood pressure and his diabetes. He never officially retired, but stopped playing once his health was too poor to continue.

“I can play music every day and never get tired of it. But if my health should get bad and I can’t handle myself very well, or people don’t come to my concerts, I probably would retire,” he told the NewsHour. “But God, let me, let me enjoy while I’m living. And I do enjoy doing what I do.”

Left: B.B. King performs onstage during the 45th Montreux Jazz Festival in 2011. The American blues legend died Thursday at the age of 89. Photo by Valentin Flauraud/Reuters