RALEIGH, N.C. — The political operative at the center of an election fraud scandal that has engulfed a North Carolina congressional race was arrested Wednesday on charges of illegal ballot handling and conspiracy. Four people working for him were also charged.

Leslie McCrae Dowless Jr., 63, was accused of directing workers to collect and mail in other people’s absentee ballots during the 2018 Republican congressional primary and the 2016 general election. It is against the law in North Carolina for anyone other than the voter or a close relative to handle a mail-in ballot, a measure aimed at guarding against manipulation.

Prosecutors are still investigating evidence of ballot tampering by Dowless and others working on behalf of GOP candidate Mark Harris during last fall’s congressional election in the mostly rural 9th District, which includes part of Charlotte and extends eastward across several counties.

The indictment represents the first charges in a scandal that has cast doubt on election integrity and will leave a congressional seat unfilled for months.

“These indictments should serve as a stern warning to anyone trying to defraud elections in North Carolina,” state elections director Kim Westbrook Strach said.

Dowless was arrested less than a week after the state elections board decided that his work for Harris, starting with the primary, tainted the Republican’s apparent victory in November. The board ordered a new election but hasn’t set a date.

Harris is not running in the do-over election; his Democratic opponent from November, Dan McCready, is. 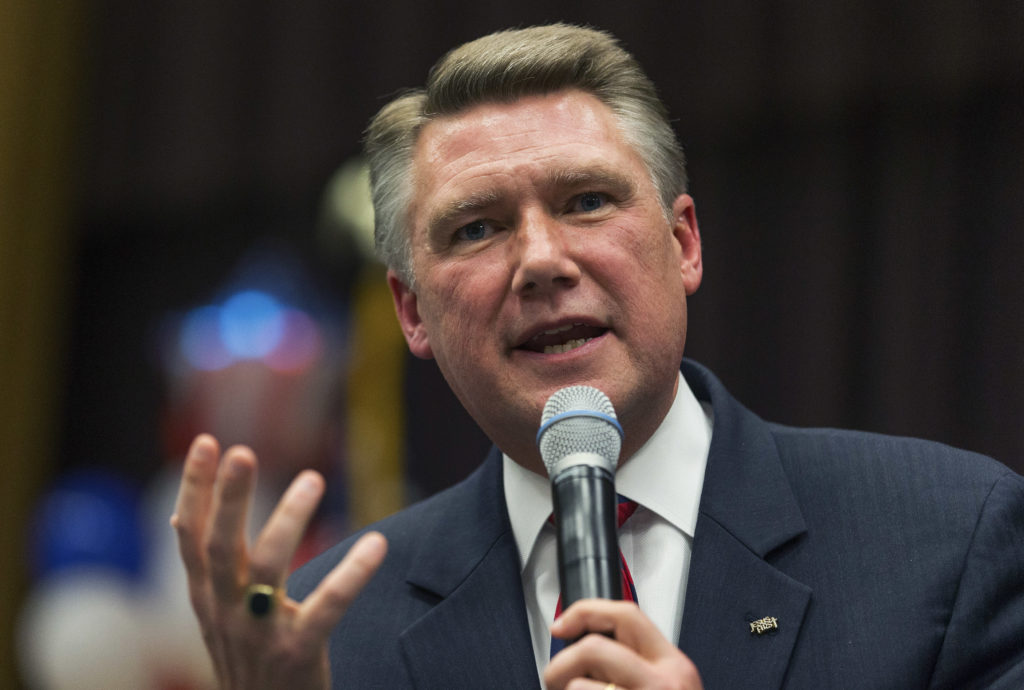 Mark Harris speaks to supporters during a volunteer meeting and rally in Winston-Salem, North Carolina on April 8, 2014. The North Carolina elections board ordered a new contest in his 2018 Congressional race because of evidence that one of his operatives may have illegally collected mail-in ballots. Photo by Chris Keane/Retuers

Harris has not been charged with a crime and has denied knowledge of any illegal practices by those involved in his campaign. But he, too, could come under scrutiny. During last week’s board hearing, he admitted writing personal checks to Dowless in 2017, a potential violation if the payments weren’t reported.

Dowless has denied any wrongdoing and did not respond to phone and text messages Wednesday. A woman hung up on a call to Dowless’ attorney.

The crimes “served to undermine the integrity of the absentee ballot process and the public’s confidence in the outcome of the electoral process,” the indictment said.

Dowless was accused of directing his workers “to mail the absentee ballot in such a manner to conceal the fact that the voter had not personally mailed it himself” — an act the indictment said constituted obstruction of justice.

In last fall’s congressional election, Harris led McCready by 905 votes out of about 280,000 cast, but the state elections board refused to certify Harris as the winner because of the fraud suspicions. Last week, Harris abruptly dropped his bid to be declared the winner and called for a new election, and the board agreed.

Wake County District Attorney Lorrin Freeman, who pursued the charges announced Wednesday, is still looking into evidence of irregularities in November. She indicated it could be weeks before any decisions are made on charges.

According to evidence at the elections board hearing, Dowless and his assistants illegally gathered up absentee ballots from voters by offering to put them in the mail, and in some cases forged signatures and filled in votes for local candidates.

Dowless refused to testify before the board without immunity from prosecution.

Dowless is a political junkie with felony convictions for perjury and insurance fraud — which led to a prison sentence in the 1990s — and several worthless-check offenses. He came to Harris’ attention because he was known to produce votes.

Harris said he wanted to sign Dowless onto his 2018 campaign after noting the Bladen County man’s work resulted in one of Harris’ Republican rivals scoring an incredible 98 percent of the mail-in ballots in the 2016 primary.

Harris hired Dowless despite repeated warnings from the candidate’s son, now a federal prosecutor in Raleigh, that Dowless was probably resorting to illegal methods.

In fact, Dowless had been on the radar of state elections investigators since 2010, when he was suspected of vote-buying but never charged. That was one of at least a half-dozen instances over the past nine years that prosecutors and election officials received complaints of serious irregularities in Bladen County.

The four other people charged in the case were paid by Dowless to collect ballots during the spring of 2018, when Dowless and his team were on the Harris campaign payroll, and during the 2016 general election, when Dowless himself successfully ran for a local soil and water conservation post, prosecutors said.