Lessons from Downton Abbey about women and money

In season five of Downton Abbey, the cook, Mrs. Patmore inherits some money. She doesn’t know what to do with it, so she asks Mr. Carson, the butler, for investment advice. Nevermind that Carson, who’s been living in servitude for a good many years, hasn’t a clue. He handles the inquiry with all the self-assuredness of a man who’s accustomed to making financial decisions. Meanwhile, the sage housekeeper, Mrs. Hughes, urges Mrs. Patmore to ask a man who really knows his way around the world.

But why ask a man, anyway? The sad truth is that most women, apart from Downton protagonist Lady Mary Crawley, weren’t involved in financial decision making in the early 20th century, and thus, were assumed to know squat. Thank goodness that era is behind us! 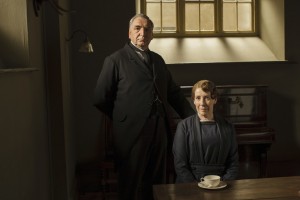 If only that were so. Yes, women today are making more of their own financial decisions, especially now that divorce is commonplace and women tend to outlive their husbands, but women’s financial literacy is still far below men’s. A new study published by the National Bureau of Economic Research illuminates the gender gap in financial literacy in alarming detail. Not only are women around the world significantly less financially savvy; they also have less confidence than men in their financial decision making.

It’s easy to think financial matters are “gender neutral,” Lusardi said. “I am a woman economist and I had made the same assumption,” she added.

When the researchers first started looking at financial literacy in the United States, they knew it was low, but the gender discrepancy didn’t immediately strike them. It wasn’t until they added 13 more countries to their study that the gender gap became salient. “We were stunned,” said Annamaria Lusardi, chair of economics and accountancy at George Washington University School of Business.

It’s easy to think financial matters are “gender neutral,” Lusardi said. “I am a woman economist and I had made the same assumption,” she added.

In the United States, the 2009 National Financial Capability Study posed the following three questions to 1,500 adults over the phone. Surveys in other countries posed the exact same questions. (Find the answers at the bottom of this post.)

1) Suppose you had $100 in a savings account and the interest rate was 2% per year. After 5 years, how much do you think you would have in the account if you left the money to grow?

2) Imagine that the interest rate on your savings account was 1% per year and inflation was 2% per year. After 1 year, how much would you be able to buy with the money in this account?

A. More than today
B. Exactly the same
C. Less than today
D. Do not know
E. Refuse to answer.

3) Please tell me whether this statement is true or false. “Buying a single company’s stock usually provides a safer return than a stock mutual fund.”

A. True
B. False
C. Do not know
D. Refuse to answer

Half of the female respondents chose “I don’t know” for at least one of the questions. The proportion of women saying they didn’t know the answer to the last question was particularly high — 41 percent. But would that have been the case, Lusardi mused, if the question hadn’t used complex jargon about mutual funds and instead asked, “Should you put your eggs all in one basket?”

“I have been teaching for 24 years now,” said Lusardi, “and it was actually this research that made me understand that I was teaching to the male student and not the female student.” That’s because more men than women tend to understand financial jargon used in the classroom. A preeminent female economist had been leaving fellow women out of the conversation. She now speaks in “plain English” when talking to her classes and her many young nieces about finance.

Similar gender gaps as in the United States exist in Germany, the Netherlands, Sweden, New Zealand, Italy, Japan, Australia, France and Switzerland. Not only does the gender gap in financial literacy hold across countries and institutions, but it persists even after controlling for marital status, age, education and income.

A big reason for this “very robust” gender gap, Lusardi said, is that people don’t acquire financial literacy in school. In fact, women graduate from college at higher rates than men do these days — that’s changed since the Downton Abbey era — but, according to a previous study using the same questions, young American women with college degrees were still 13 percentage points less likely to answer financial literacy questions correctly than were young college-educated men.

Financial literacy is acquired informally — from our parents, our peers and through our work and relationships. 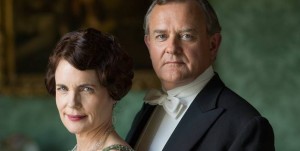 Photo of Lord Grantham and the Countess of Grantham courtesy of PBS.

Marriage is certainly part of the story. Married women are less financially literate than married men, presumably because money managing has traditionally been the husband’s job. Think about Downton Abbey again, and Lord Grantham’s reluctance to involve his wife in the estate’s finances, even though her American fortune kept the Abbey afloat. Today, plenty of wives pay the bills and do the taxes, but their financial knowledge may still be limited, said Lusardi. And where men continue to dominate the household’s financial affairs, divorcees and widows face a precarious retirement.

U.S. teens rank between Latvia and Russia on financial literacy, far below Shanghai

Part, but not all, of the difference between men and women may be the confidence gap. The Dutch Central Bank administered a version of the survey in which they took out the “I don’t know” answer and instead asked respondents to rate how confident they were in their choices. That meant women were forced to choose an answer, and not surprisingly, they got more questions right, even with a low confidence level. But they still underperformed men.

What is it about our society that keeps women behind when it comes to understanding money and finances? When looking at Germany, the researchers zeroed in on differences between East and West Germans, and found that 20 years after unification, exposure to different financial markets and institutions seemed to have an impact on financial literacy in the formerly independent nations. Financial literacy was higher in West Germany than in East Germany, but only West Germany had a significant gender gap; Both East German men and women had low financial literacy. The same was true in Russia and Romania, leading the authors to hypothesize that gender parity in financial literacy may be a lasting effect of Communist societies having more egalitarian gender roles. Although more research on this topic is needed, it’s possible, said Lusardi, that as markets develop, women get left behind.

There is an upside to some of these otherwise depressing findings about women’s financial literacy: Women know what they do not know.

But given women’s increasing independence and participation in the labor market in market-driven economies, isn’t it surprising that the gender gap is holding strong? “No,” said Lusardi, “because osmosis is inefficient.” In other words, we can’t count on women soaking up the same financial knowledge as men, especially when we entrust parents – and not schools – to pass down that information. Expecting parents to teach good financial literacy is like expecting them to properly explain complex physics, she said — and that’s assuming daughters get the same lessons as sons. Nine decades after Downton Abbey is supposed to have taken place, parents are still more likely to talk to sons about money management, according to “The Opposite of Spoiled,” the new book from New York Times personal finance columnist Ron Lieber. What do they talk to daughters about? How to give money away.

That’s why Lusardi is pushing for schools to teach financial literacy, so that both girls and boys are equally exposed. She moved from Dartmouth to Washington, DC, to found the Global Financial Literacy Excellence Center, which researches financial literacy and advocates for financial education. 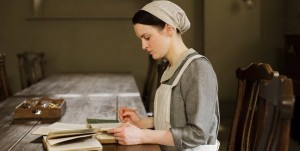 Photo of Daisy, the assistant cook, courtesy of PBS.

There is an upside to some of these otherwise depressing findings about women’s financial literacy: Women know what they do not know. Just as Mrs. Patmore’s assistant in the kitchen, Daisy, fights for herself to get one-on-one math tutoring because she knows she needs it, women’s honesty about their lack of financial knowledge, as reflected by all those “I don’t know” responses, is good thing. How many women have you seen sink a bank, Lusardi asked? Their cautionary instinct is needed, she thinks, especially among financial advisers. Former Citigroup CFO Sallie Krawcheck echoed that view when she told Making Sen$e last summer that the financial crisis might not have happened had Lehman Brothers been called “Lehman Siblings.”

But of course, if you were Downton Abbey’s Mrs. Hughes or Mrs. Patmore, you already knew that. The non-spoiler spoiler: Mrs. Patmore didn’t take Carson’s investment advice.

Paul Solman reported on Americans’ astounding financial illiteracy in 2011: “Get this: Americans 50 or older were asked, suppose you had $100 in a savings account, and the interest rate was 2 percent per year. After five years, would you have more than $102, exactly $102, or less than $102? Two percent interest, five years. What portion of the country didn’t know that more was the blindingly right answer? Half. It might explain why 1.5 million Americans filed for bankruptcy last year alone — no clue, no cushion.” Watch that report below.