It’s hard to say how many lesbian, gay, bisexual and transgender (LGBT) youth are homeless in the U.S. But one townhouse in Washington, D.C., decorated with rainbow pinwheels and inspirational messages, is offering a place where the teens can go to stay off the streets.

Researchers estimate that 20 percent to 40 percent of all homeless youth identify as LGBT, while they make up only 4 percent to 10 percent of the general population. And when it comes to resources for these vulnerable youth, there are few options.

Ruby Corado’s group house for LGBT youth in Washington opened in May to youth ages 18-24, and is already full. Corado, an activist who founded Casa Ruby — a drop-in center for LGBT youth — said demand for the 10 beds in the row house has been huge. “I wish I had 20 houses to put everyone in,” she said.

Corado, herself transgender, said many of the youth she serves have families that have rejected them for their gender identity or sexual orientation. “We grow up in homes where there is no understanding of what transgender is, and the only information that is out there is that it’s not good,” she said. “Many parents don’t want something wrong in their homes so they just get rid of that.”

Starting the group house had been a dream of Corado’s for years, ever since she became homeless as a young transgender woman.

Although there are other resources for D.C.’s homeless, LGBT and gender non-conforming people don’t always have the same access. “If someone tries to go to a female shelter as a trans woman they literally tell you you can’t sleep there because you’re not female,” Corado said. “And then when you go to the male shelter, they do take you, but again, they put you in dangerous conditions where you don’t want to go to the shelter. That is why you end up on the streets.” 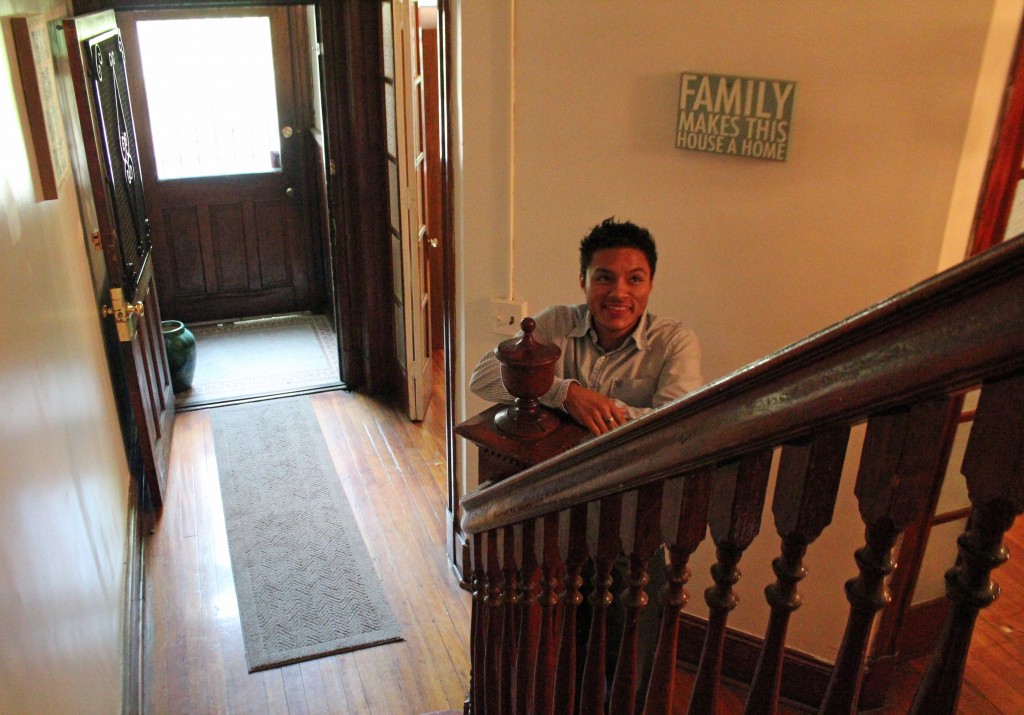 Percy Cramer, 25, is a full-time employee at the group house. He helps coordinate residents’ schedules, which include group sessions, personal activities and meals. Photo by Eric Krupke

In February, the U.S. Department of Housing and Urban Development issued a new rule to ensure all HUD program housing is open to all individuals, regardless of gender identity. But according to Meredith Dank, a senior research associate at the Urban Institute, the policy does not always guarantee that LGBT people are treated equally.

“There are many cases where young people don’t feel safe going into the programs because they don’t feel like it’s an affirming space,” she said. “So then they choose to sleep on the streets, or go home with a stranger, or a variety of options that are there.”

Dank helped author a study earlier this year that found many homeless LGBT youth must participate in sex work in order to get food and shelter, because they can’t necessarily turn to traditional resources for homeless people. “They’re being picked up by the juvenile criminal justice system,” she said. “And then once you have that record, it makes everything that much harder.”

Dank said she thinks the first step in addressing the problem of LGBT homelessness is to have more affirming spaces like Corado’s group house, which allows residents to stay for up to 18 months. She says that unstable living conditions lead to problems in other areas. “You’re unlikely to remain in school,” she said. “It’s very difficult to find employment because you don’t have a stable address to put down, because you never know where you’re going to sleep the night before.”

Corado aims to provide this stability but also hopes to create a loving environment for those who might have never had one. “I want them to know what love is. Their whole life, they’ve been told there’s something wrong. Here, they’re coming to experience what good is.”

Joshua Barajas contributed to this report.

Left: Ruby Corado, a Washington, D.C., activist, stands in the garden of a group house she opened for LGBT youth in May. Teens can live in the house for up to 18 months while they seek a more permanent home, schooling or a job. Photo by Eric Krupke.