LGBTQ ‘dreamers’ are particularly vulnerable as DACA winds down. Here’s why.

As a teenager living in Phoenix, Arizona, Jerssay Arredondo felt he had to choose between being undocumented and queer.

Arredondo, who came with his parents to the United States from Mexico when he was 4 years old, said that he felt like coming out would put him at further risk for discrimination when he was already facing the challenge of being undocumented in the U.S.

He remembers thinking: “If I could get my status, if I can get a job … I can come out and live happily as a queer person.”

Receiving work authorization and relief from deportation under Deferred Action for Childhood Arrivals (DACA) in 2012 allowed him to do that, he said. Arredondo is one of many LGBTQ “dreamers” who now find themselves facing a particular set of challenges as President Donald Trump’s administration plans to roll back the DACA program.

As of Sept. 5, the U.S. will not accept new applications under DACA. Current DACA recipients whose status will expire before March 5, 2018, can apply to renew their status by Oct. 5. For thousands of people, that means their DACA status will end in the next few years, unless Congress revives a similar program through legislation.

LGBTQ “dreamers” say the program allowed them to gain a foothold in a country where they already face high rates of economic insecurity and inconsistent protection under the law. Now that it’s rolled back, experts say LGBTQ “dreamers” are particularly vulnerable to discrimination, mistreatment and hate crimes, in the U.S. as well as their countries of origin.

Here’s a look at some of their challenges.

A twofold struggle for employment

About 267,000 undocumented adults identify as LGBTQ, according to the Williams Institute at the University of California-Los Angeles School of Law. The Williams Institute estimated that 75,000 of the 1.7 million people eligible for DACA in the U.S. this year identified as LGBTQ. Of those, 36,000 received DACA status, and about 24,000 people renewed that status, the majority of them in California or Texas, according to the estimate.

LGBTQ people already face an elevated risk of poverty and unemployment. Though 20 states in the U.S. along with the District of Columbia prohibit employment discrimination on the basis of sexual orientation and gender identity, most states do not. Some cities have passed their own employment protections, even in states that lack LGBTQ nondiscrimination laws.

“I don’t know, if I get deported and go back to Mexico, how I would live my life as a gay person.” — DACA recipient Cuahuctemoc Salinas

“People are going to be at risk of having to seek out employment opportunities that are dangerous, perhaps in the underground economy,” Conron said. 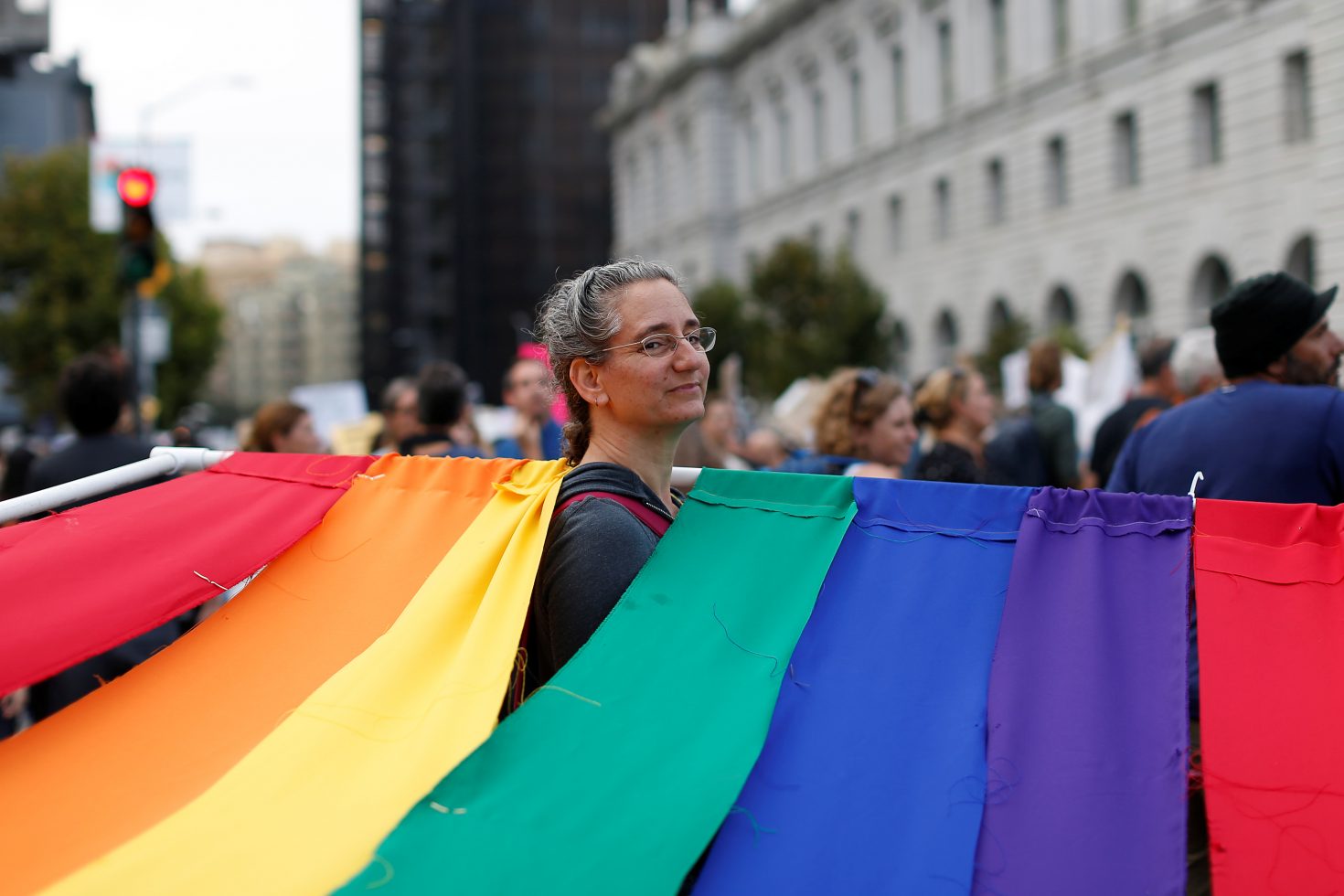 A demonstrator carries a rainbow flag during a rally against the rescindment of DACA (Deferred Action for Childhood Arrivals) program outside the San Francisco Federal Building in San Francisco, California, U.S., September 5, 2017. Photo by Stephen Lam/Reuters

As a child growing up in Los Angeles, Cuahuctemoc Salinas, who came to the U.S. from Acapulco, Mexico, when he was 2 years old, didn’t know he was undocumented. He discovered it when he applied for college and asked his mother for his Social Security number. She told him that he didn’t have one.

“I felt like my entire body was numb,” Salinas said. “I was like, wait, this entire time, I did everything ‘American.’ I was president of so many clubs, I had a 4.2 GPA, I did everything that I could to excel in academics. And to find out that you don’t have a Social Security number while you’re applying for colleges — it was very depressing for me.”

And as a gay person, being undocumented compounded his sense of not belonging.

A high school guidance counselor helped him through the process of applying for college, and Salinas enrolled in the University of California-Berkeley. In 2012, he received DACA status. The following summer, he took six jobs on campus. For him, DACA was an opportunity to work — one that affected his life more than he anticipated. “I didn’t know what an impact DACA would have for me … I remember saying to myself, ‘I have this privilege, I might as well utilize it,’” he said. Today, he works as a community organizer and advocate in Los Angeles, helping homeless people gain access to housing.

Higher risk of abuse in detention

The announcement also brings the concern among LGBTQ “dreamers” that they could be incarcerated in detention centers, where they are at particular risk for abuse.

In general, LGBTQ people are much more likely to be assaulted in prisons than non-LGBTQ people. A 2011-12 National Inmate Survey by the Bureau of Justice Statistics found that 12.2 percent of non-heterosexual inmates reported being “sexually victimized” by another inmate in prison and 5.4 percent reported being sexually victimized by staff; among heterosexual inmates, 1.2 percent had been assaulted by another inmate and 2.1 by staff.

The average stay in immigration detention facilities, as reported by Immigration and Customs Enforcement, is about 30 days. But LGBTQ people are more likely to file requests for asylum, which may extend their stay in immigration detention facilities, says Keren Zwick, managing attorney for the LGBT Immigrant Rights Initiative at the National Immigrant Justice Center.

“By nature of their sexual orientation or gender identity, [LGBTQ people] have more viable claims than some, and so they end up spending time in custody longer,” she said.

The risks of mistreatment in detention are particularly high for transgender people. Some detention centers house transgender women in men’s facilities, or vice versa. Access to some types of medical care, including hormone replacement therapy, is slim. And transgender people are often placed in solitary confinement as a means of “protection” from abuse, bringing psychological trauma, according to firsthand accounts collected by Human Rights Watch.

In Santa Ana, California, city officials in 2012 began allowing Immigration and Customs Enforcement to house transgender detainees at a city jail. But activists and local residents launched a campaign against the unit, claiming mistreatment and abusive conditions, and in May 2016, the city decided to end its contract with ICE.

The Prairieland immigration detention center in Alvarado, Texas, also opened a unit for transgender detainees in February, but human rights groups still say they’re not sure it will improve treatment.

For some, deportation ‘a death sentence’

Others say they fear persecution for their gender identity or sexuality in their countries of origin. Some LGBTQ people seek asylum in the U.S. specifically because of abuse in their home countries, said Catalina Velasquez, a DACA recipient and transgender woman from Colombia who worked on the LGBT policy team for Vermont Sen. Bernie Sanders’ presidential campaign.

“Right now I’m petrified. I’m beyond scared,” Velasquez said. “Colombia is not a welcoming place for a trans person.”

For now, Salinas says he is living “day by day.”

“At the end of the day, our communities have been surviving for years, with or without these programs. If these programs go away, we will continue to find ways to do so.” — Jonathan Jayes-Green

“I don’t know, if I get deported and go back to Mexico, how I would live my life as a gay person,” Salinas said. “I think it’s gonna be difficult.”

But LGBTQ and immigration activists also emphasized the resilience of their communities. In the five years since DACA was implemented, there’s been growing cooperation and collaboration between LGBTQ and immigration activists, says Isa Noyola, director of programs at the Transgender Law Center. “As a movement, we have no choice but to really support each other,” she said.

Jonathan Jayes-Green, a DACA recipient who founded the organization Undocublack to provide a space for undocumented black people to connect, said that the end of DACA would not mean defeat for undocumented LGBTQ communities.

“At the end of the day, our communities have been surviving for years, with or without these programs. If these programs go away, we will continue to find ways to do so,” he said.

A few hours after Attorney General Jeff Sessions’ announcement this week, Salinas told the NewsHour via text message that he was determined to thrive. “He put a fire in me to win this battle,” he said.