As the San Francisco Giants prepare to play the Washington Nationals in Major League Baseball’s postseason Friday, the Library of Congress has made it possible to watch the Giants battle Washington 90 years ago — in the World Series. 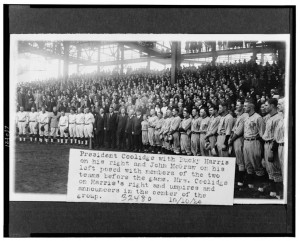 Oct. 9, 1924 — President Coolidge with Bucky Harris on his right and John McGraw on his left, posed with members of the two teams before World Series game; Mrs. Coolidge on Harris’s right and umpires and announcers in the center. Courtesy of Library of Congress.

The Library of Congress Thursday revealed a digital copy of a news reel detailing the deciding Game 7 of the 1924 World Series between the New York Giants and the Washington Senators. The film clips of the game, a 12-inning thriller in which the Senators scored a walk-off hit to win the game and the World Series championship, are the only known footage of the clinching game.

Mike Mashon, head of the Moving Image Section for the Library of Congress, detailed the unexpected find in a blog post:

It started with Lynanne Schweighofer, a Moving Image Preservation Specialist at the Packard Campus. Lynanne’s mother had been named executor of the estate left by an elderly neighbor who passed away last year in a suburb of Worcester, Massachusetts. While preparing the neighbor’s house for sale, Lynanne’s father found eight cans of film in the rafters of the detached and not climate-controlled garage, a space we archivists would not normally recommend for long term storage of motion picture film…especially since these reels were labeled as nitrate film stock.

As nitrate film is flammable and can deteriorate quickly, the Library’s Packard Campus for Audio Visual Conservation was surprised to find the eight film reels in “astoundingly good condition” after 90 years of storage and a delicate shipping process. Though the other video was contained in the reels, the four minutes of World Series footage particularly grabbed the archivists’ attention.

As the approaching baseball postseason was increasingly likely to include the Washington Nationals, the library sped up their preservation and conversion efforts, which included a newly-added piano music track composed and performed by Catholic University professor Andrew Simpson, to get the 90-year-old material out to public.

Now baseball and history fans alike can experience the excitement of Washington’s only baseball championship to date; that is, unless the current Washington team can overcome a Giants club once more to fight their way to a second.