EDGARTOWN, Mass. — President Barack Obama on Thursday appealed for “peace and calm” on the streets of a St. Louis suburb besieged by violent clashes between police and crowds protesting the shooting death of an unarmed teenager.

“I know emotions are raw right now in Ferguson and there are certainly passionate differences about what has happened,” Obama said in his first in-person remarks about the tense standoff in the Missouri suburb. “But let’s remember that we’re all part of one American family, we are united in common values and that includes the belief in equality under the law, respect for public order and the right to peaceful public protests.”

Obama, speaking from the Massachusetts island where he’s on a two-week vacation, said there was no excuse for excessive force by police in the aftermath of Saturday’s shooting of 18-year-old Michael Brown. He said he had asked the Justice Department and FBI to investigate the incident.

The president said he had also spoken Thursday morning with Missouri Gov. Jay Nixon, who has faced criticism for not doing more to control the violence. Obama defended the Democratic governor calling him “a good man, a fine governor.”

Police have defended their use of tear gas and smoke bombs to repel protesters, saying they took those actions to disperse a large crowd after some people threw Molotov cocktails and rocks at officers. 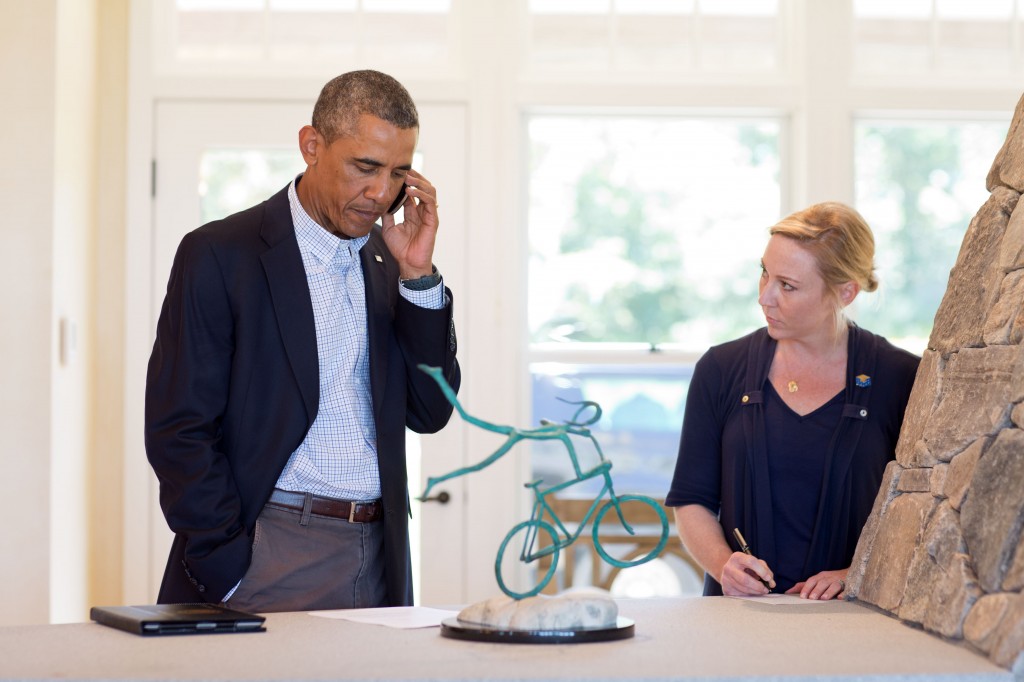 In this photo released by the White House, President Obama speaks on the phone with Missouri Gov. Jay Nixon about the situation in Ferguson, Missouri, in Chilmark, Martha’s Vineyard, Massachusetts on August 14, 2014. Photo by Pete Souza

President Obama also said the U.S. has broken Islamic militants’ siege on Iraq’s Sinjar Mountain, but that airstrikes will continue.

Obama said U.S. operations helped thousands of civilians flee down the mountain, and that it’s unlikely that more airdrops of food and water will be needed.

The Islamic State group’s advance in Iraq has driven thousands of people from their homes.