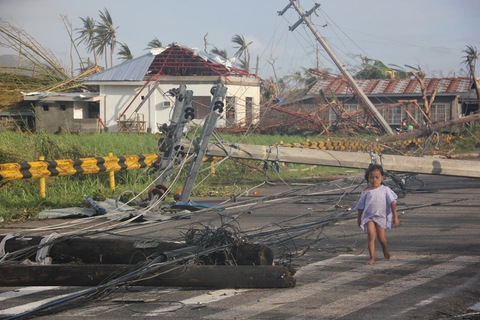 Government agencies and relief organizations are struggling to reach the estimated 11 million people affected by Typhoon Haiyan. The slow distribution of aid — food, water, shelter and medicine — has some Filipinos taking desperate actions. Tacloban is an example of what can go awry, a city in the Philippines of 220,000 — slightly smaller than Baton Rouge, La. — one of the most devastated cities in the nation that is now struggling under the weight of logistical hurdles.

For one, Mayor Alfred S. Romualdez said the city desperately needed transportation and drivers to distribute the relief packages of food and water shipments that are just sitting at the nearby airport.

In another instance, survivors stormed a rice warehouse, 15 miles from Tacloban, carrying off thousands of sacks of grain. Eight were crushed to death during the incident. And NBC News reported that looting of personal property has increased, with people breaking into homes in order to find food, water and other goods.

Even efforts to conduct a mass burial in Tacloban failed when police trucks carrying more than 200 bodies had to turn around after hearing gun shots.

“People are just scavenging in the streets. People are asking food from relatives, friends. The devastation is too much… the malls, the grocery stories have all been looted,” Joselito Caimoy, a 42-year-old truck driver, told The Philippine Star. “They are empty. People are hungry. And they (the authorities) cannot control the people.”

Explore The Associated Press’ interactive of news coverage of Typhoon Haiyan’s effects on the Philippines.