LOS ANGELES (AP) — Kobe Bryant’s wife offered a poignant portrait of her NBA superstar husband and their daughter Monday at a packed memorial service for the two, who were among nine people killed last month in a helicopter crash in Los Angeles.

Speaking at times through tears, Vanessa Bryant praised her husband’s devotion to their family as she addressed thousands of fans gathered at Staples Center to remember Bryant and 13-year-old Gianna.

“God knew they couldn’t be on this Earth without each other,” Vanessa Bryant said. “He had to bring them home to have them together. Babe, you take care of our Gigi.”

The service took place at the downtown arena where Bryant played for the Los Angeles Lakers for the final 17 seasons of his two-decade NBA career. Thousands of Lakers fans, many wearing Bryant’s jersey or team colors, attended the tearful gathering to honor Los Angeles’ most popular athlete and a global basketball icon. 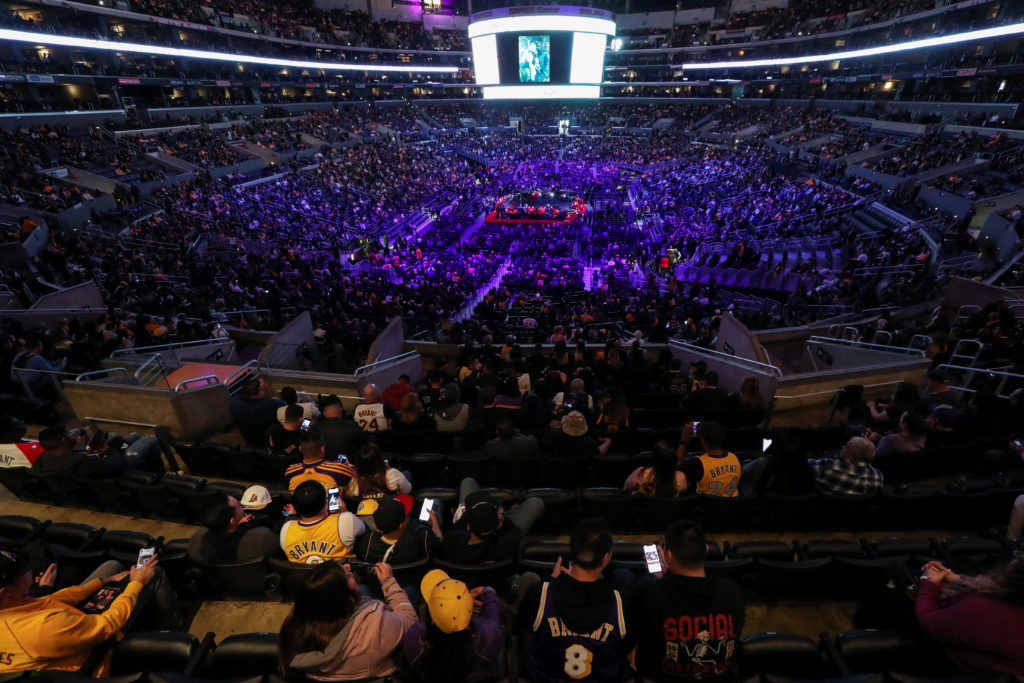 People attend a public memorial for NBA great Kobe Bryant, his daughter Gianna and seven others killed in a helicopter crash on January 26, at the Staples Center in Los Angeles, California, U.S., February 24, 2020. Photo by Lucy Nicholson/Reuters

After Jimmy Kimmel welcomed the crowd, Vanessa Bryant remembered the family’s life with Gianna and her three siblings and then eulogized her husband. They had been together since 1999.

“He was the most amazing husband,” she said. “Kobe loved me more than I could ever express or put into words. I was fire. He was ice. Vice versa at times. … He was my everything.”

Jordan, the Chicago Bulls great whose career was wrapping up as Bryant’s was starting in the late 1990s, praised Bryant as “one of my dear friends. He was like a little brother. … As I got to know him, I wanted to be the best big brother that I could be.”

O’Neal and Bryant joined the Lakers together in 1996, and they won three consecutive championships during eight tumultuous seasons in purple and gold. Although their relationship was often publicly rocky, Shaq said the two were always friendly in private, even comparing their dynamic to John Lennon and Paul McCartney.

“Kobe and I pushed each other to play some of the greatest basketball of all time,” O’Neal said. “I’m proud nobody has accomplished what the threepeat Lakers have done since the Shaq and Kobe Lakers did it.”

O’Neal also got the biggest laugh in the somber service with a profane joke about an exchange in which Shaq told Kobe there was no “I” in team, but Bryant responded by noting that there is an “M-E.”

Vanessa Bryant was followed on the podium by basketball stars Diana Taurasi and Sabrina Ionescu. Kobe Bryant was a passionate advocate for women’s basketball, and Gigi Bryant was a promising young player. 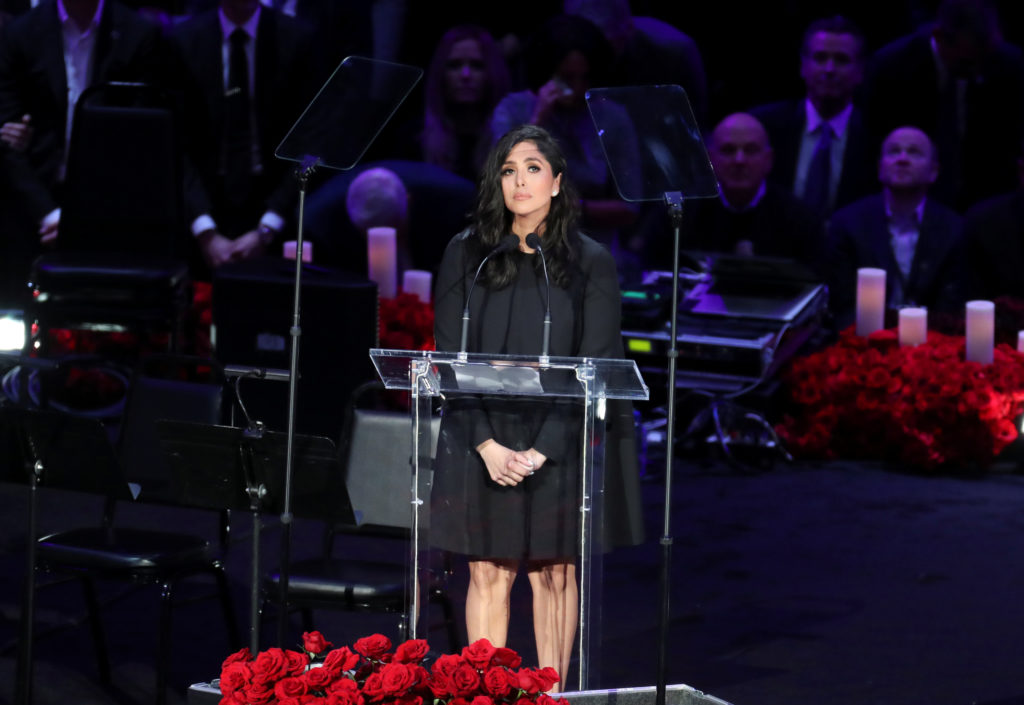 Vanessa Laine Bryant looks on during a public memorial for her late husband, NBA great Kobe Bryant, his daughter Gianna and seven others killed in a helicopter crash on January 26, at the Staples Center in Los Angeles, California, U.S., February 24, 2020. REUTERS/Lucy Nicholson

Rob Pelinka, Bryant’s longtime agent before he became the Lakers’ general manager in 2017, referred to the day of the crash as “when the axis of the world seemed to shift forever, for all of us.” Pelinka was also Gigi Bryant’s godfather, and the families were close.

He also revealed that Bryant had texted him only moments before the crash, asking for help in securing an internship with a baseball agent for teenager Alexis Altobelli, who lost her parents and younger sister in the crash moments later.

“Kobe lived to make other people’s lives better, all the way up to his final text,” Pelinka said.

Among the early arriving fans was Alyssa Shapiro, 27, of Huntington Beach, who said she was inspired to become a basketball player after watching countless Lakers games with her father.

The family’s love of the game — and Bryant’s work in women’s sports — prompted her to become a middle school girls’ basketball coach. Her team had played Gianna’s team and she would watch Bryant cheer for his daughter in the stands. She said she went up to Bryant to introduce herself at a game.

“I just wanted to thank him for being such an inspiration to me,” she said. “I grew up watching him on the screen. … It made me realize he’s more than just that guy out on the court.”

The concourse was a sea of people dressed in the team colors of purple and yellow and others in black. On the scoreboard, the Bryant family’s life flashes by in pictures. 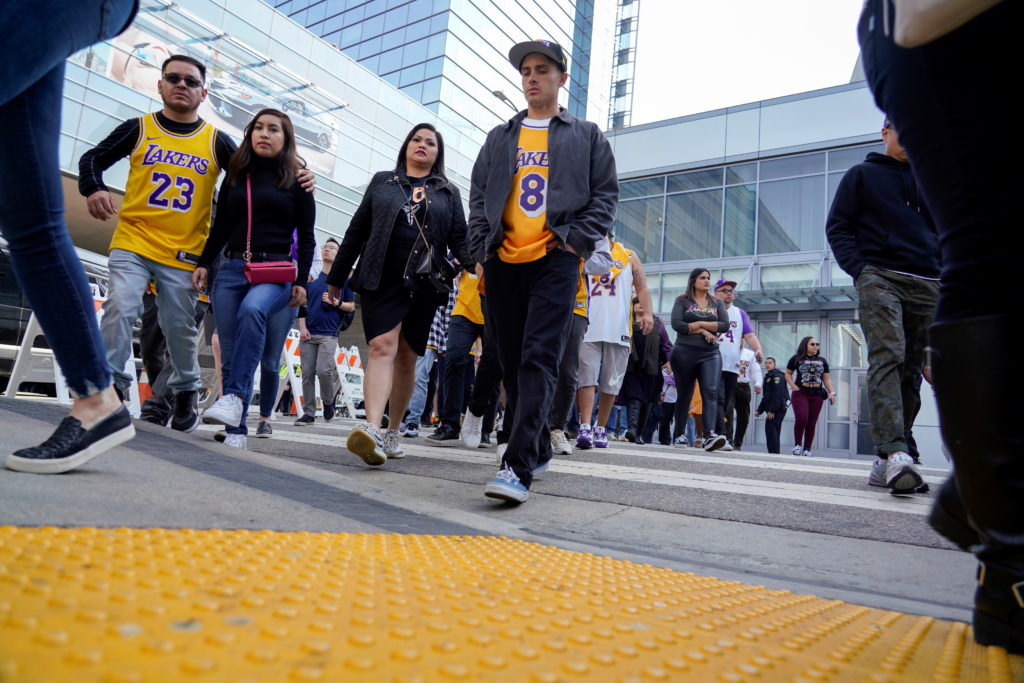 Fans wait in line before the public memorial for NBA great Kobe Bryant, his daughter and seven others killed in a helicopter crash, at the Staples Center in Los Angeles, California, U.S., February 24, 2020. Photo by Kyle Grillot/Reuters

The service began just hours after Vanessa Bryant sued the owner of the helicopter that crashed in the fog last month. The wrongful-death lawsuit claimed that the pilot, Ara Zobayan, was careless and negligent by flying in cloudy conditions.

At the arena, fans were given a program containing photos, a purple KB pin and a T-shirt with photos of the father and daughter.

Money from ticket sales was to be given to the Mamba and Mambacita Sports Foundation, which supports youth sports programs in underserved communities and teaches sports to girls and women.

Bryant played his entire 20-year NBA career with the Lakers, who moved from the Forum to Staples Center when it opened in 1999. The five-time NBA champion’s two retired jersey numbers — 8 and 24 — hang high above the arena where he became the third-leading scorer in league history. Lakers star LeBron James surpassed him on the night before Bryant’s death.

Bryant remained one of the most popular figures in Los Angeles well into retirement. Dozens of public memorials and murals have been installed around the sprawling metropolis.

A private funeral was held Feb. 7 in Orange County.

Left: People walk past a mural before the public memorial for NBA great Kobe Bryant, his daughter and seven others killed in a helicopter crash, at the Staples Center in Los Angeles, California, U.S., February 24, 2020. Photo by Kyle Grillot/Reuters