LOS ANGELES (AP) — Widespread peaceful conduct across California at demonstrations to protest the death of George Floyd brought an end to curfews in Los Angeles and other Thursday while other cities kept restrictions in place as a precaution against looting and violence.

In announcing the end to the Los Angeles curfew, Mayor Eric Garcetti said that “Angelenos are rallying around powerful and peaceful demonstrations against racial injustice,”

“We remain committed to protecting the right of all people to make their voices heard and ensuring the safety of protesters, businesses, residents, families, and our entire community,” Garcetti said in a statement.

Earlier, Los Angeles County Sheriff Alex Villanueva said a curfew will no longer be enforced in the county areas where his deputies patrol but communities within the county can still make their own curfew decisions.

The cities of San Francisco and San Jose also lifted their curfews. Oakland and Sacramento officials said they planned to keep curfews in place.

Authorities across the state have announced criminal charges against more than 100 people accused of looting and violence. Police in the San Francisco Bay Area said a break-in suspect was killed when officers mistook his hammer for a gun.

The shooting of 22-year-old Sean Monterrosa in the city of Vallejo on Tuesday was the only confirmed California death at the hands of law enforcement following days of massive demonstrations accompanied, at times, by attacks on police and looting of stores. 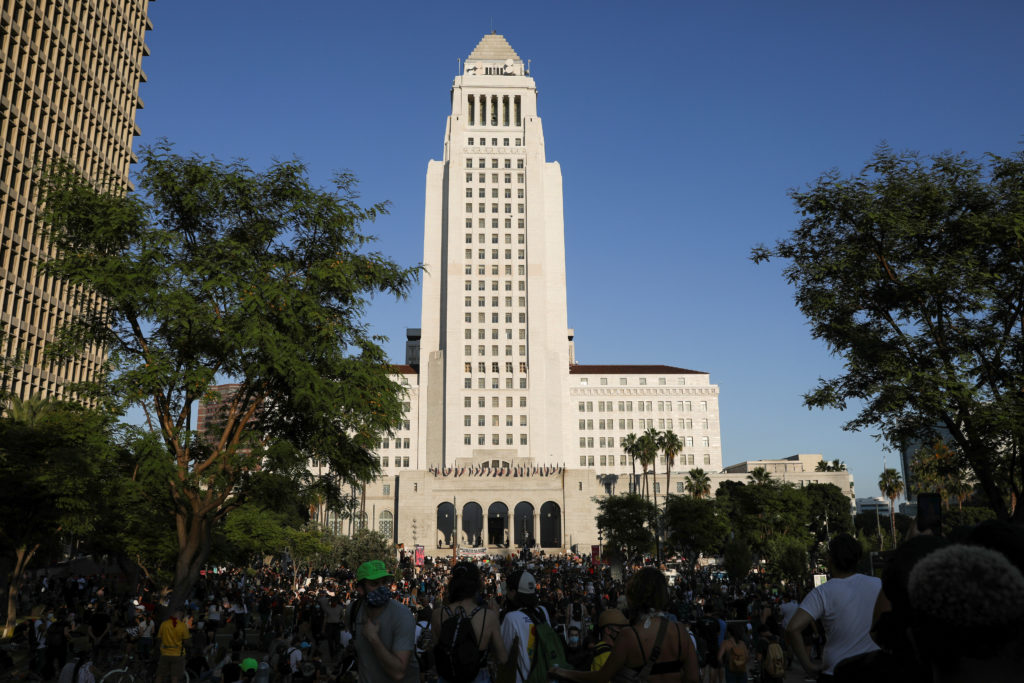 Demonstrators gather in front of the Los Angeles City Hall during a protest in response to the death in Minneapolis police custody of George Floyd, in Los Angeles, California, U.S., June 3, 2020. REUTERS/Patrick T. Fallon

Police have blamed the thefts on organized groups of criminals and stressed that the protesters were not responsible.

On Wednesday, there were few signs of violence as demonstrations over the death of George Floyd in Minneapolis continued for an eighth day. An estimated 10,000 people gathered in San Francisco while thousands more flocked on foot and in cars to Hollywood. Sacramento and smaller cities also had protests.

National Guard troops requested by San Diego Diego County sheriff rolled into the city of La Mesa, where a peaceful weekend protest turned into violence and destruction. Guard members took up posts at the city’s police department and other sites. The sheriff said the troops will secure critical infrastructure.

In downtown Los Angeles, dozens of people sat down and waited to be arrested as an act of civil disobedience more than an hour after curfew.

NBA stars Steph Curry and Klay Thompson marched with protesters in Oakland, where some demonstrators lay down for nearly nine minutes, representing the amount of time a white police officer pressed a knee into Floyd’s neck while he pleaded for air.

Orange County brought felony cases against two men, accusing one of trying to steal a police car and another of assaulting an officer by throwing rocks and bottles during demonstrations.

The San Francisco Bay Area city of Vallejo has been a significant exception as other cities become more peaceful.

The chief said officers responding to calls of looting at a Walgreens around 1 a.m. Tuesday confronted about a dozen people in the parking lot. One of the suspect’s cars rammed into a police vehicle.

Officers spotted Monterrosa near the building with what appeared to be a gun in his waistband. An officer opened fire through the windshield of a police car, hitting Monterrosa. Williams said the suspected gun turned out to be a hammer.

John Burris, an attorney for Monterrosa’s family, said the victim “was shot multiple times while he was on his knees and appeared to be trying to surrender.”