After 77 years of searching, researchers announced they are one big step closer to knowing where aviation pioneer Amelia Earhart and her plane ended up. An aluminum fragment found in 1991 on a remote, uninhabited coral atoll in the Pacific island nation of Kiribati appears to be from her lost aircraft.

Researchers with the International Group for Historic Aircraft Recovery (TIGHAR) said this particular aluminum fragment was patched onto Earhart’s twin-engined Lockheed Electra during a stop in Miami and is as unique as if it was an individual’s fingerprint.

The group recently visited a team in Newton, Kansas who have restored an Electra similar to Earhart’s. A forensic imaging specialist compared historic photos of the riveted patch to the rebuilt plane, leading them to conclude it comes from her plane. 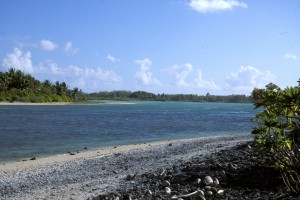 The entrance to the lagoon on Nikumaroro in Kiribati, where researchers believe the remains of Earhart’s plane might lie.

Earhart and her navigator Fred Noonan set out in March of 1937 to circumnavigate the globe. One theory suggests they ran out of fuel somewhere near their target destination of Howland Island and crashed into the Pacific Ocean. This finding would debunk that theory. Researchers from TIGHAR have been testing the alternate theory that the pair landed on Nikumaroro, survived for awhile but finally died.

Left: A fragment from Amelia Earhart's plane may bring researchers one step closer to solving her mysterious disappearance.