Cities in America are slowly becoming more segregated, according to a new study published in Sociological Science. Data compiled by American University professors Michael Bader and Siri Warkentien finds that New York City, Los Angeles, Chicago and Houston are experiencing a slower, steadier version of “white flight” that could produce re-segregation over time. In fact, 35 percent of the neighborhoods surveyed will likely re-segregate within the next 20 years. And this change is part of a trend happening in cities nationwide.

According to the study, cities are undergoing a process called gradual succession. It’s the idea is that “neighborhoods will change from one group to another group over many, many years and not so much whites fleeing neighborhoods rapidly,” said Bader, who is the lead researcher. “It will appear integrated for some time but will eventually transition to all one group, essentially re-segregating.” This results in blacks becoming concentrated into small areas of cities and inner suburbs. Latinos and Asians are segregating into neighborhood clusters throughout metropolitan areas. 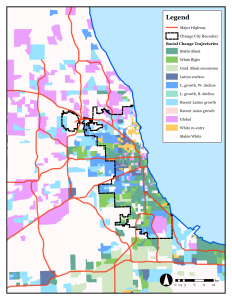 Chicago, the country’s third largest city, has also consistently been one of the most segregated. The suburbs are experiencing a growth in integration largely due to gentrification and gradual succession from the city. Photo courtesy of American University.

Bader and Warkentien assessed the degree of racial change among blacks, whites, Latinos, and Asians from 1970 to 2010 in the country’s four largest metropolitan areas, identifying common trajectories of movement. Neighborhoods with modest integration, or at least 10 percent of another race, have experienced gradual succession. Over time, these communities will become dominated by one racial group. The study’s website offers an interactive map breaking down each city’s trajectory.

Much of this gradual succession is not a consequence of white flight, but rather white avoidance. White flight, the post-Civil Rights era migration of whites from cities to the suburbs, mostly ended in the 1970s. Now, whites are typically staying in integrated neighborhoods – so long as the integration comes to them. Compared to blacks and Latinos, who are actively moving to different neighborhoods, whites are less likely to move into communities that are already integrated. Bader said that contributes to neighborhood re-segregation.

Unlike previous research, this study compares the same places in a city over time and accounts for changes specifically within neighborhoods that are already considered integrated. That’s usually the presence of a second racial group defined by an arbitrary percentage. With this “growth mixture model,” Bader said, the data sends a clear message that neighborhoods are actually becoming more segregated than originally projected.

“Previous studies have only looked at the presence of multiple racial groups and not the degree to which they’re integrated,” he said. “So many neighborhoods have appeared to be integrated simply because there were enough blacks and whites to meet a specific threshold.” 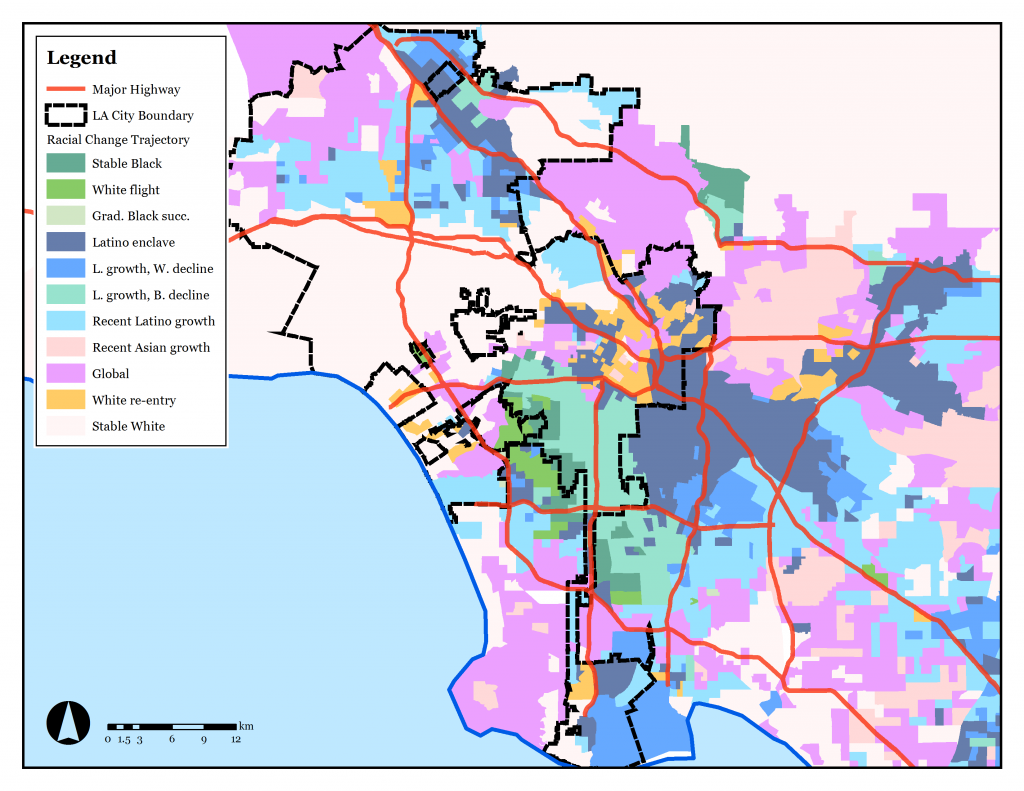 This map of Los Angeles shows that amid areas of durable integration (shown in purple), many other communities are experiencing varying trajectories of gradual succession. The study estimates these neighborhoods will become re-segregated within the next two decades. Photo courtesy of American University.

On the other hand, many neighborhoods are steadily integrating. As the above map of Los Angeles shows, there are some communities where multiple groups are living together (shown with purple highlights) and that doesn’t appear to be changing. Segregation has decreased overall as well, especially among African-Americans and in suburbs. While many scholars predict segregation will continue to decline, Bader says this new research provides another way to understand our communities.

“It shows we’ve made lot of progress since Civil Rights legislation in the 1960’s,” he says. “But that doesn’t mean we’ve moved to a time where race does not influence whats happening in people’s lives, including where we choose to live. And that affects how we address racial inequality and public policy.”