This man has tried crossing the U.S.-Mexico border 5 times. He says he won’t try again

As part of a reporting trip, the PBS NewsHour’s Joshua Barajas visited a soup kitchen for recently deported migrants in Mexico that’s a stone’s throw from the Mariposa port of entry in Nogales, Arizona. There, he met a 37-year-old husband and father who, days earlier, tried to cross the border into the U.S. He was not successful.

Jose Uriel Andrades Saavedra shows me the small puncture wounds on his hands. He says they’re from the thorns of some palm trees.

I met Saavedra at El Comedor, a soup kitchen sponsored by the Kino Border Initiative — a binational effort among the Jesuit Refugee Service/USA, the Diocese of Tucson and other religious organizations — that serves as a transitional pit stop for recently deported migrants.

Two nights ago, Saavedra and five others tried to cross into the U.S. through the Mariposa port of entry, which funnels travelers between Nogales, Arizona, and Nogales, Mexico.

But that night, Border Patrol spotted them. Saavedra says agents chased after them and captured three people from their group; he managed to escape.

This was his fifth attempt to cross in the U.S. He’s failed every time. And Saavedra, 37, says he’s done with the U.S.

“I prefer working here in Mexico because, for example, if I go over there, I risk getting bitten by a snake; I could get robbed,” he tells me in Spanish. “And, in the first place, it’s not my country. It’s not my country,” he says twice, for added emphasis. 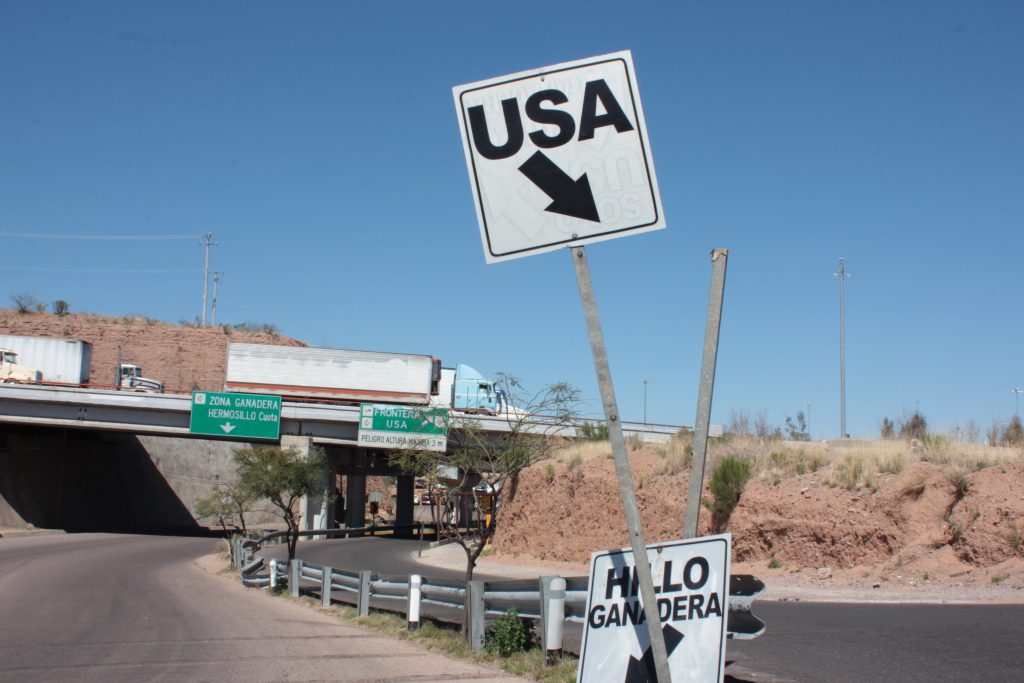 El Comedor is a concrete structure that’s a short walk from the port of entry. Inside the single-room building is an array of volunteers who offer first aid, among other services. Many migrants dropped off by bus after being processed by the National Institute of Migration in Mexico have blisters on their feet or, during the winter months, are suffering from colds and flus.

Fifteen migrants have shown up to the kitchen this morning. Beyond a meal, migrants are offered broad legal advice, phone calls to family and a new set of clothes. Some arrive with the blue uniforms issued to them in U.S. jails.

Father Sean Carroll, a Jesuit priest who runs the kitchen, says it’s even more critical now to raise awareness to “humanize this reality” of forced migration, of people fleeing poverty and violence and drug trafficking.

Evoking Pope Francis, Carroll said the crisis can be measured in statistics, but we must see migrants as persons, names and families.

“They’re human beings with dreams and hopes,” Carroll tells me. “If anyone can recognize their humanity and dignity, their response would be different,” he adds. 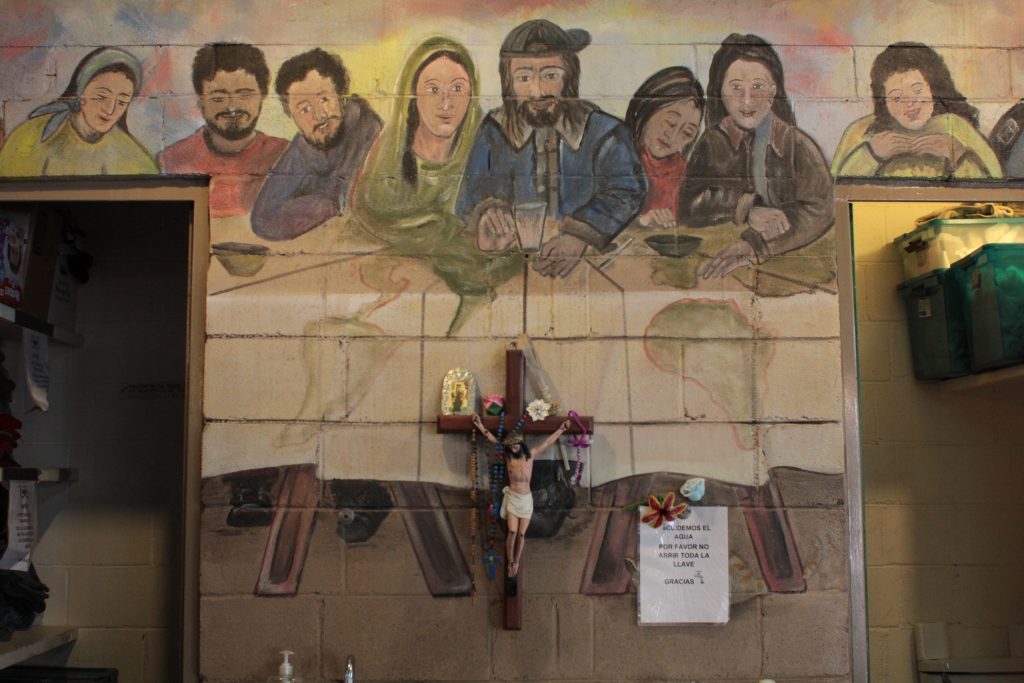 The “Last Supper” mural painted on one of the walls of the kitchen. Photo by Joshua Barajas/PBS NewsHour

On one of the walls of the room is a mural recreating da Vinci’s “The Last Supper.” Jesus, wearing a backward baseball cap, is bookended by migrants.

Saavedra says there are a lot of people who cross the border to do “honorable work.” While he acknowledges that some people traffic drugs into the U.S., “there’s some that truly are going to work for their families. It’s real,” he said.

Saavedra says he is unable to work in Mexico because he lacks a birth certificate, and all the other documents it would permit. He was unable to take a custodial job in a factory that pays 1,200 pesos — around $60 USD — a week because of his missing birth certificate. He does not have enough money to purchase a new one.

“With my birth certificate, I can stay here and work in Mexico,” he tells me. A new one would cost 311 pesos, a little more than $16. Supporting a wife and children, Saavedra says he doesn’t have enough money to spare.

While migrants eat at the metal picnic tables, they are presented with verbal and nonverbal assurances of their rights. Volunteers offer broad legal guidance, and signs hanging on the walls remind them of their rights.

One sign says: “Tengo derecho a vivir una vida libre de violencia,” which nods to the surges of Central American migrants fleeing crime and violence in their home countries. The sign is also meant as a reminder to those who experienced mistreatment at the hands of U.S. Border Patrol. 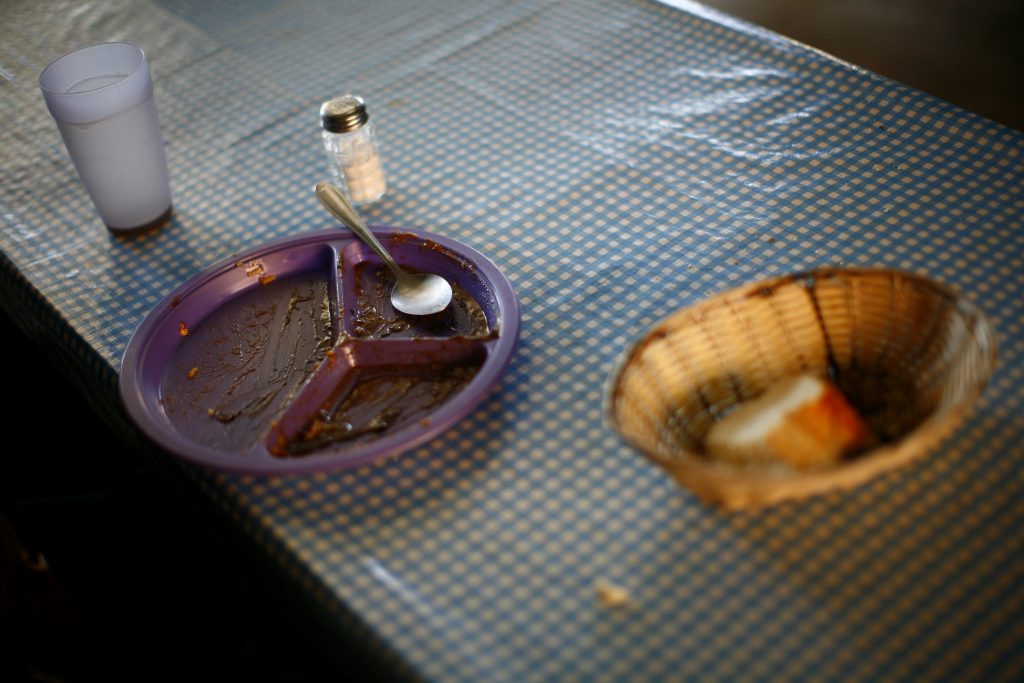 Plates are scattered on a table in this 2010 photo of the soup kitchen in Nogales, Mexico. Photo by Eric Thayer/Reuters

In January, shortly after taking office, President Donald Trump ordered the Department of Homeland Security to begin construction on the border wall between the U.S. and Mexico. The new U.S. Border Patrol Chief, Ron Vitiello, told reporters at his swearing-in ceremony earlier this month that if the wall is done right, it will be “important and effective,” reported ABC News.

“Somebody has to arrest the people who are going to continue to attempt to enter even if there is a border wall,” he added.

Kino co-authored a statement that condemned the executive action. His organization also condemned the plan to increase the number of Border Patrol agents along the border, saying “we witness firsthand the suffering caused by dramatic increases in border policing.”

Kino also releases an annual report, called “Our Values on the Line,” compiled from interviews with migrants who come through the kitchen. In the most recent version from 2015, Kino reported that one third of the migrants said they experienced mistreatment or abuse at the hands of U.S. border patrol, the most common being verbal abuse. The report also covers complaints from migrants about physical abuse, conditions at detention facilities and not receiving their belongings and money from Border Patrol agents, among others.

While breakfast is being served, volunteers — including a representative from the National Commission of Human Rights in Mexico — stressed that migrants have certain rights as human beings, adding that any complaints filed with the commission would remain confidential.

“What’s your right as a human being?” one volunteer says to the group of migrants. “You have a right to your identity,” he adds. 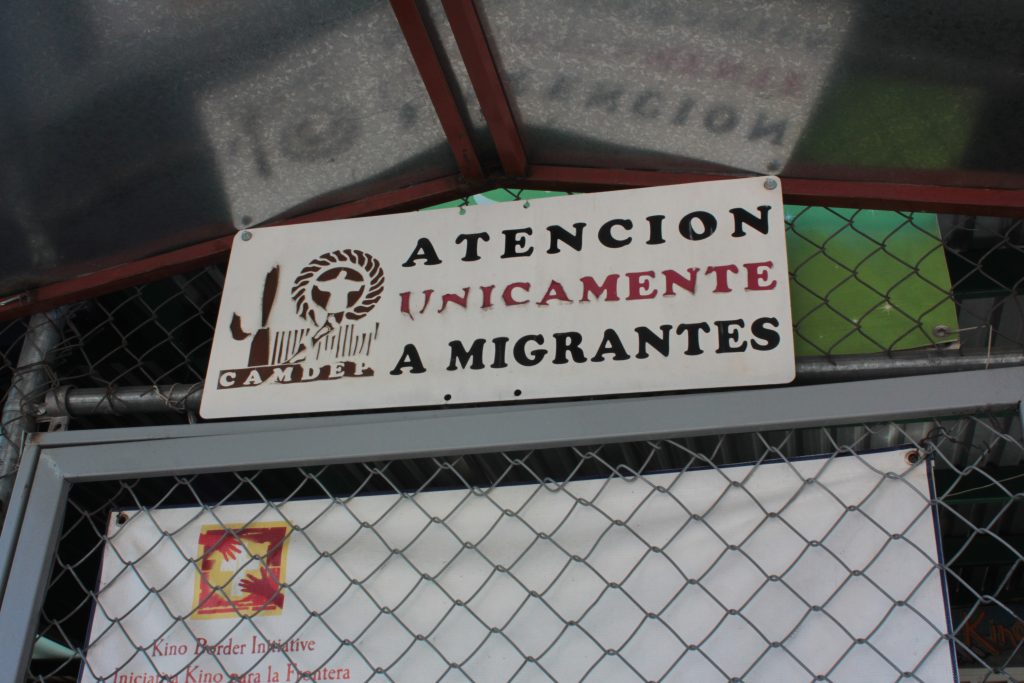 A sign above the entrance of the Aid Center for Deported Migrants, or CAMDEP as an acronym in Spanish. The kitchen provides two meals a day for migrants. Photo by Joshua Barajas/PBS NewsHour

Saavedra calls Mexican city police “rats,” adding that while he’s had no problem with federal and Army officers in Mexico, city law enforcement has taken money from him.

“I, truthfully, have nothing to say about the Border Patrol or the American government,” he tells me.

Carroll later tells me that Saavedra’s opinions about the Border Patrol are uncommon.

At the close of our conversation, I ask if he has anything to add.

Not wanting to leave it there, I ask what gives him hope.