Marvel Comics adds a female Muslim superhero to its roster 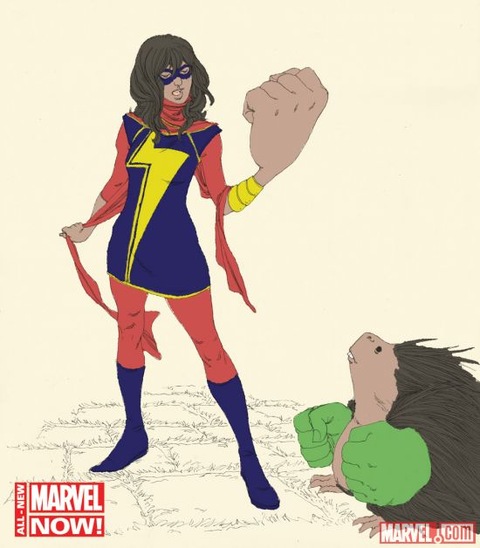 In February, Kamala — who takes over the “Ms. Marvel” mantle from character Carol Danvers, a blonde Air Force pilot with alien genes — will be the first Muslim character to get her own solo series at Marvel, the New York Times reported.
“Captain Marvel represents an ideal that Kamala pines for,” G. Willow Wilson, the writer of the upcoming book, said to the Times. “She’s strong, beautiful and doesn’t have any of the baggage of being Pakistani and ‘different.'”

Editor Sana Amanat said the series will see Kamala balance a life of superheroics, dealing with her new shape-shifting powers and struggling with her conservative background.

Kamala’s debut is the latest effort from Marvel to diversify its superhero roster. Comics Alliance said Kamala’s introduction will be the seventh ongoing female-led book from Marvel, including series led by She-Hulk and an all-female X-Men team. And while Marvel already has a few Muslim characters, Ms. Marvel will be one of four minority-led titles available from the publisher, which includes Miles Morales, a black Hispanic teen who donned the Spider-Man superhero costume in 2011.

Willow G. Wilson took to Twitter Wednesday to respond to the reactions to the character announcement:

@attractivegkry I'm totally stunned at the reaction. It's like I woke up and the world was different and awesome.

Possibly the best #MsMarvel reaction so far. I lol'd. http://t.co/eKLoByMBWi