A deadly winter storm walloped large swaths of the heavily populated east coast on Friday and Saturday bringing snow, gale-force winds, icy conditions and poor visibility to parts of the region, as officials warned residents to hunker down inside their homes.

At least 17 deaths were reported from weather conditions according to the Associated Press, and thousands more were stranded for hours along interstates in Kentucky and Pennsylvania, while coastal flooding and power outages also were widely reported.

As many as 85 million people located in 15 states are in the storm’s path and a blizzard warning remained in effect for more than 33 million people on Saturday, according to the Weather Channel.

The storm pounded parts of the south before the weather pattern moved north leaving at least two feet of snow in West Virginia, Washington, D.C. and Maryland. Snow also blanketed areas of Mississippi, Georgia, Arkansas, Tennessee and the Carolinas.

Andrew Orrison, a meteorologist with the National Weather Service, told the PBS NewsHour in an interview on Saturday “very heavy snows and blizzard-like conditions” would continue to pound areas of New York, Philadelphia, and southern New England “through the bulk of tonight.”

Orrison said areas of West Virginia, Maryland and southeast Pennsylvania were the hardest hit among the states struck by the storm this week.

“Right now that’s where the heaviest snow amounts have been,” he said

A low-pressure weather system formed in the Gulf of Mexico and descended on several southern states Wednesday night before moving up through the Mid-Atlantic region along the east coast.

Governors in New York and New Jersey declared a state of emergency on Saturday. 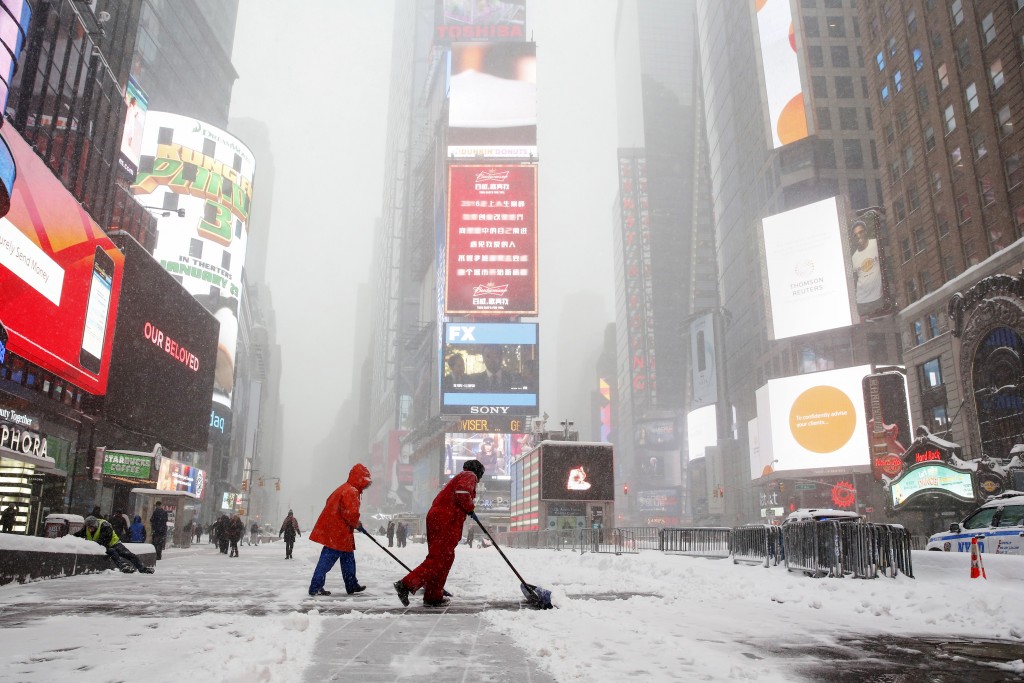 Workers shovel snow during a snowstorm at Times Square in the Manhattan on Jan. 23, 2016. A winter storm dumped nearly 2 feet of snow on the suburbs of Washington, D.C., on Saturday before moving on to Philadelphia and New York, paralyzing road, rail and airline travel along the U.S. East Coast. Photos By Shannon Stapleton/Reuters

In New York City, where more than 20 inches of snow was expected, Mayor Bill de Blasio urged residents to avoid travel, while bus service and some subway lines were shuttered for much of Saturday.

New York Mayor Bill de Blasio said drivers of non-emergency vehicles would be subject to arrest if they violated the ban. He didn’t know when the ban would be lifted but with the storm expected to taper Saturday evening, he said officials would re-evaluate later.

“The best thing to do is stay home,” the mayor said at a press conference Saturday morning. 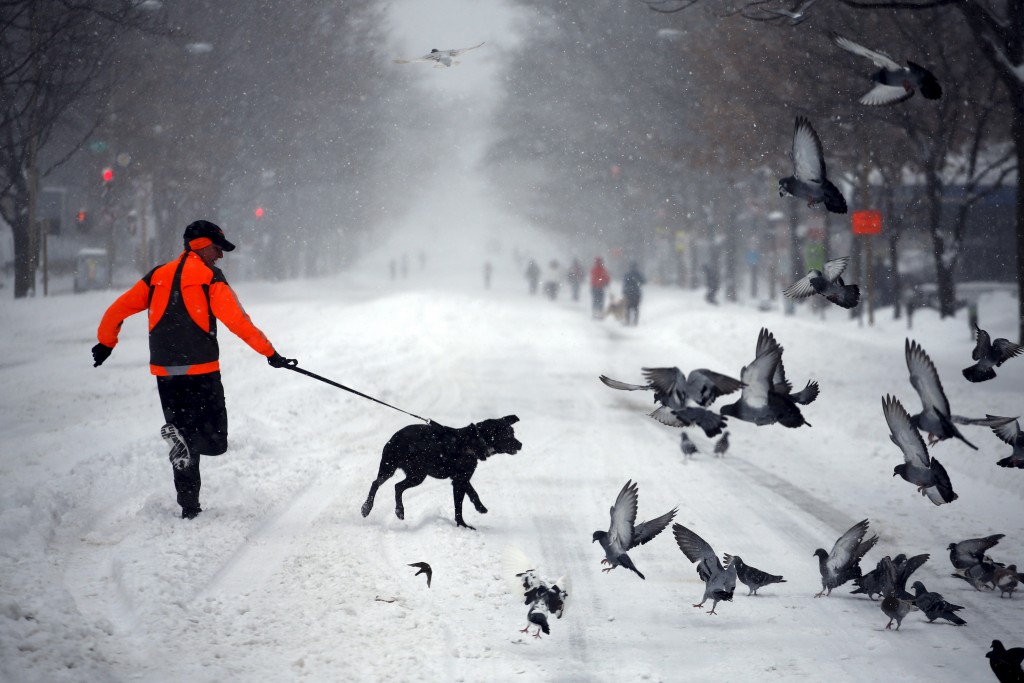 A man runs with his dog along a street covered by snow during a winter storm in Washington Jan. 23, 2016. Photo By Carlos Barria/Reuters

With travel banned, city landmarks quickly shut their doors. All Broadway matinee and evening performances were canceled, and the Metropolitan Museum of Art announced it would close early.

More than 200,000 people lost power in New Jersey and the Carolinas, while roughly 8,300 flight have been cancelled due to the storm.

Heavy snow and winds were expected to stretch into New England, while meteorologists predicted conditions would begin to temper by Sunday.

“The good news is were going to see a break in the weather pattern across the eastern U.S.,” Orrison said. “We’re going to see temperatures warm up here in the next few days. That will allow people to dig out.”

Left: A man walks along a street covered by snow during a winter storm in Washington Jan. 23, 2016. A winter storm dumped nearly 2 feet of snow on the suburbs of Washington, D.C., on Saturday before moving on to Philadelphia and New York, paralyzing road, rail and airline travel along the U.S. East Coast. Photo By Carlos Barria/Reuters