WASHINGTON — John McCain is being laid to rest at the U.S. Naval Academy after a five-day procession that served as a final call to arms for a nation he warned could lose its civility and sense of shared purpose.

The private ceremony in Annapolis, Maryland, was as carefully planned as the rest of McCain’s farewell tour, which began in Arizona after he died Aug. 25 from brain cancer and stretched to Washington.

READ NEXT: John McCain held on to hope that the world could be better, close aide says

On Saturday, speeches by his daughter Meghan and two former presidents — Republican George W. Bush and Democrat Barack Obama — remembered McCain as a patriot who could bridge painful rivalries. But even as their remarks made clear their admiration for him, they represented a repudiation of President Donald Trump’s brand of tough-talking, divisive politics.

McCain was gone, said Bush, who called his 2000 rival for the GOP presidential nomination a friend. 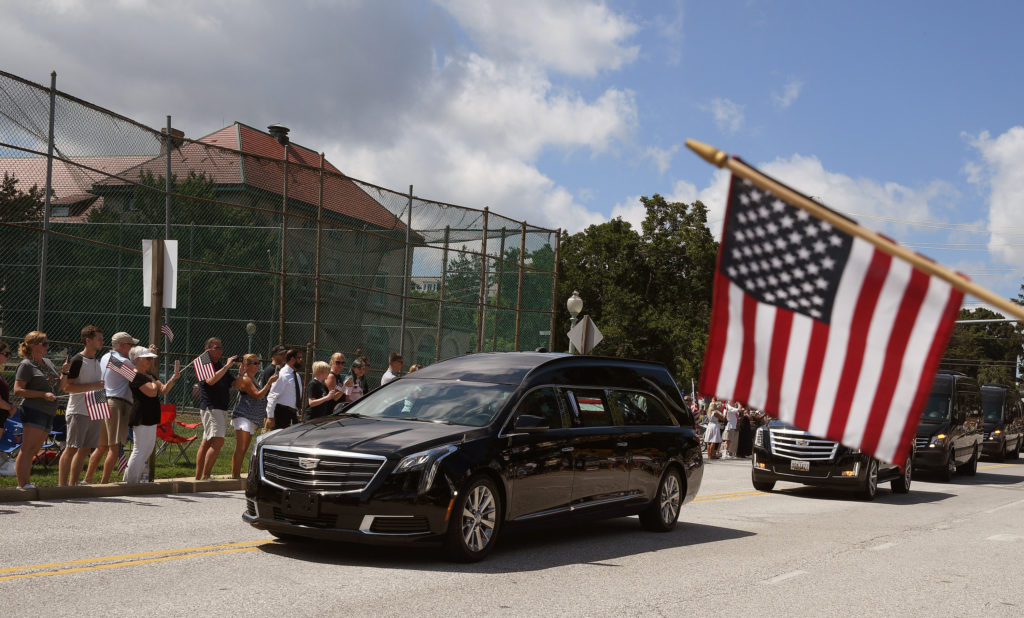 A hearse containing the body of the late Senator John McCain arrives for a private memorial service and burial at the U.S. Naval Academy in Annapolis, Maryland, on Sept. 2, 2018. Photo by Mary F. Calvert/Reuters

But it was Meghan McCain’s emotional remarks that most bluntly rebuked Trump, who had mocked her father for getting captured in Vietnam. At the pulpit of the spectacular cathedral, with Trump’s daughter Ivanka in the audience, McCain’s daughter delivered a broadside against the uninvited president.

“The America of John McCain,” she declared with a steely stare, “has no need to be made great again because America was always great.”

READ NEXT: Washington pays tribute to McCain: ‘He would fight tooth and nail for his vision of the common good’

The audience of Washington’s military, civilian and other leaders burst into applause.

With that, McCain’s family, including his 106-year-old mother, Roberta, is escorting his remains to Annapolis on Sunday. 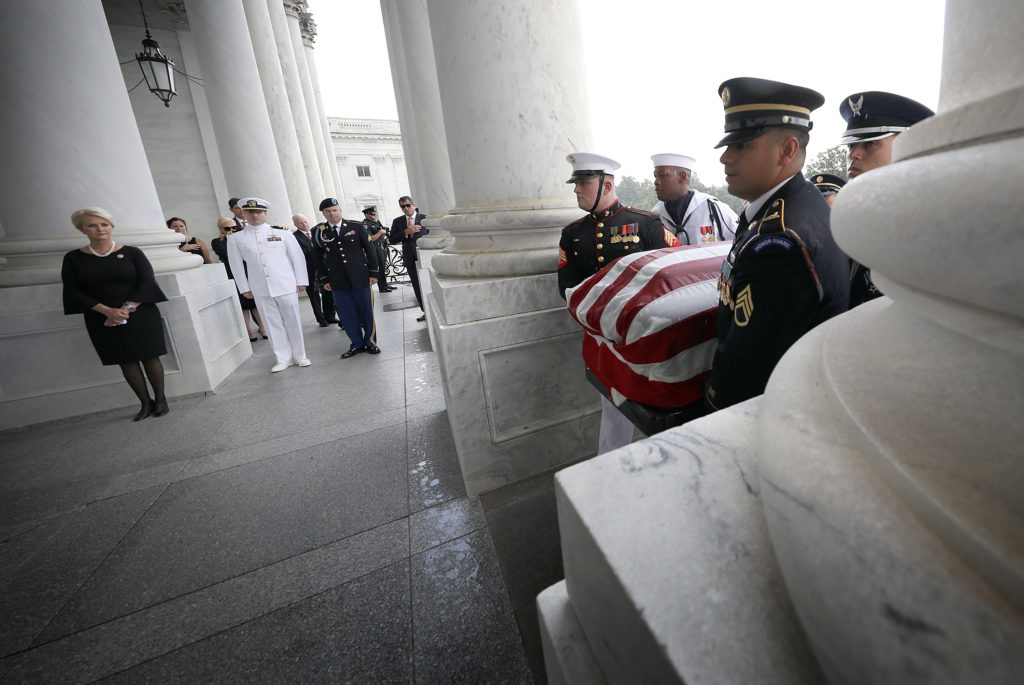 Cindy McCain watches as a military honor guard team carries the casket of her husband, the late-Sen. John McCain (R-AZ), into the U.S. Capitol on Aug. 31, 2018 in Washington, D.C. Photo by Win McNamee/Reuters

McCain’s choice of burial location was as deliberate as the other details of his procession. He picked the historic site overlooking the Severn River over the grandeur of Arlington National Cemetery, where his father and grandfather, both admirals, are buried. Larson, McCain’s beloved friend from their Class of 1958, had reserved four plots at the storied cemetery — two for McCain and himself, and two for their wives, now widows. Larson died in 2014, and McCain wrote in his recent memoir that he wanted to be buried next to his friend, “near where it began.”

Trump was to remain in Washington. He spent Saturday tweeting and golfing in Virginia.