PHOENIX — Arizonans lined the streets and mourners gathered at a church Thursday as a motorcade carrying Sen. John McCain’s body left the state Capitol for a second day of memorial services for the maverick politician, former prisoner of war and two-time presidential candidate.

A memorial service for Sen. John McCain will begin at 1 p.m. ET. Watch live in the player above.

People holding American flags and campaign signs with the word “McCain” stood along parts of the 8-mile (13-kilometer) route as the hearse made its way toward the North Phoenix Baptist Church for a commemoration featuring Vice President Joe Biden and other dignitaries.

About 15,000 people came to pay their respects to the late senator at the state Capitol.

A few firefighters saluted from atop a fire engine parked on an overpass when the 11-vehicle motorcade with a 17-motorcycle police escort passed underneath on Interstate 17. Cars on the other side of the highway stopped or slowed to a crawl in apparent tribute.

READ NEXT: A personal look at John McCain’s political impact

During Wednesday’s private service at the Capitol for family and friends, Cindy McCain pressed her face against her husband’s coffin, and daughter Meghan McCain erupted in sobs.

McCain sons Doug, Jack and Jimmy, daughter Sidney and daughter-in-law Renee shook hands with some of the thousands of people who filed past the senator’s flag-draped casket to pay their final respects.

About 1,000 seats for Thursday’s church service were made available to members of the public who signed up. 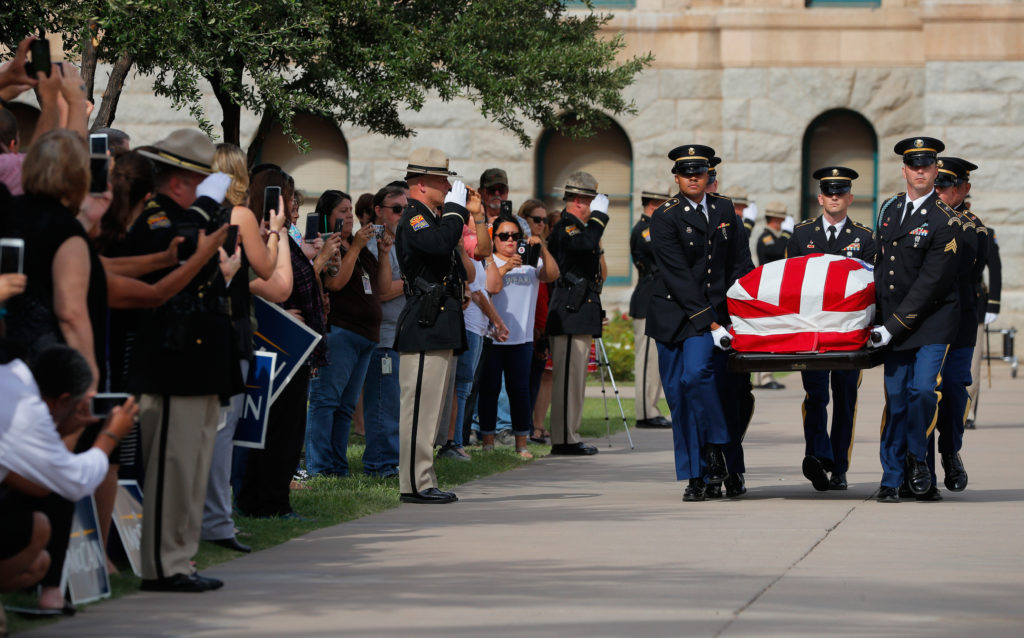 An Honor Guard carries the casket of Senator John McCain out of the Arizona State Capitol to a memorial service in Phoenix, Arizona, on Aug. 30, 2018. Photo by Brian Snyder/Reuters

Michael Fellars was among those awaiting the motorcade outside the church. The Marines veteran said he was also the fourth person in line Wednesday to attend the public viewing at the Capitol.

“He was about the only politician that I have ever known who cared for the people in his country, and he tried his level best to make it a better place in which to live,” Fellars said.

“He’s done so much for us,” said Costalez, who stood watch earlier this week while McCain’s body was at a funeral home.

READ NEXT: How did John McCain and Ted Kennedy find common ground? ‘They listened’

A choir from the Jesuit-run Brophy College Preparatory school that two of McCain’s sons attended was scheduled to sing “Amazing Grace” and “Arizona” during the church service.

The music chosen for the recession was Frank Sinatra’s signature song, “My Way,” paying tribute to a man who became known for following his own path based on his personal principles.

The much smaller service at the Capitol was filled with affecting moments and demonstrations of deep respect for the statesman and Navy pilot who was held prisoner by the North Vietnamese for 5½ years after being shot down over Hanoi. 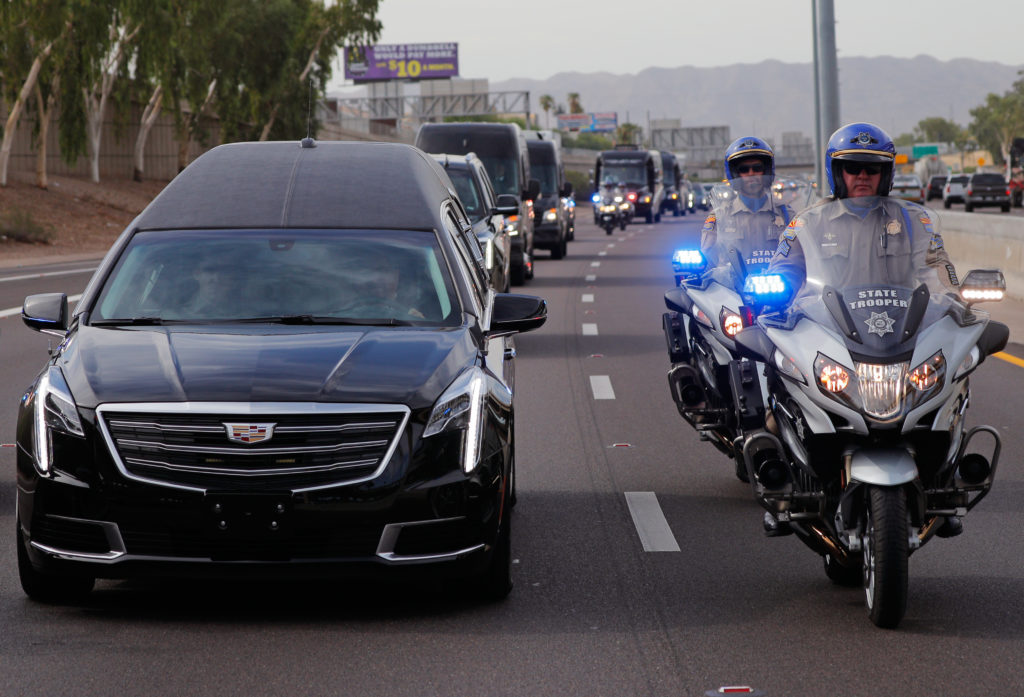 A motorcade carries the casket of Senator John McCain from the Arizona State Capitol to a memorial service in Phoenix, Arizona, on August 30, 2018. Photo by Brian Snyder/Reuters

Gov. Doug Ducey remembered McCain as “Arizona’s favorite adopted son” on what would have been his 82nd birthday.

The Capitol was then opened to the public in the afternoon, allowing visitors to walk past the closed casket after waiting in line outside in temperatures that reached 104 degrees (40 Celsius).

Inside, former military members in shorts and T-shirts saluted. Others placed their hand over their heart or bowed, including Vietnamese-born residents who traveled from Southern California.

Ray Riordan, an 87-year-old Navy veteran who fought in the Korean War, came from Payson, Arizona.

“I grew up where a handshake was a contract and your word was your bond,” Riordan said. “He represented the last of that as far as I’m concerned.”

The McCain family said about 15,000 people in all came to pay their respects at the Capitol.

After Thursday’s church service, a military aircraft was scheduled to take McCain’s body back east for a lying-in-state at the U.S. Capitol on Friday, a service at the Washington National Cathedral on Saturday, and burial at the U.S. Naval Academy in Annapolis, Maryland.