We need to talk about why we don’t want kids

Back in January we ran a story headlined, “The case for having just one kid.” Somewhat surprising to me and my fellow editors, it garnered a ton of personal comments and quite a lively debate. It seems we all have an opinion on how many kids is the right amount. 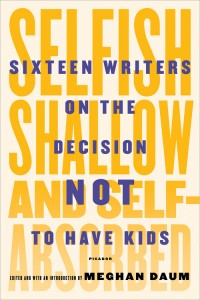 “Selfish, Shallow, and Self-Absorbed: Sixteen Writers on the Decision Not to Have Kids,” edited by Meghan Daum, is out today.

So when I heard about Meghan Daum’s new essay collection dedicated to the topic of not having any kids at all, I jumped at the chance to talk to her about it.

Daum is a columnist for the Los Angeles Times and a best-selling author. In her most recent book, “The Unspeakable,” she writes about her own ambivalence about having kids. In this latest project, “Selfish, Shallow, and Self-Absorbed: Sixteen Writers on the Decision Not to Have Kids,” Daum has selected writers from all backgrounds who had “different ways of talking about the choice to not have kids.”

In the introduction to the book Daum writes: “I wanted to show that there are just as many ways of being a nonparent as there are of being a parent.” I spoke to her earlier this month about that idea and why now is a good time to start the conversation.

NEWSHOUR: This topic is not a new feeling among people, but we’ve never really discussed it before. Why is now a good time to talk about this topic?

NEWSHOUR: What are some of the more surprising comments that you’ve heard regarding columns you’ve written on the subject?

MEGHAN DAUM: I‘ve always been surprised every time I’ve written about this is how thankful people are. The biggest response I get is “thank you for saying this; I don’t feel so alone.” You’re always gonna get people who say some version of “you don’t know what you’re missing” or “I feel sorry for you” or “you can’t possibly know love until you’ve been a parent,” but you know that’s to be expected. When the subject comes up, I feel there is almost this anticipation that there is going to be a huge blowback, and I have found that that people are thankful to hear it. It’s almost like people are afraid to talk about it, when mostly it’s the same handful of people who have a hard time getting their minds around it, who tend to leave the most comments and write the most blog posts. And I think for the most part you have people who either don’t care really what people do, or people who really appreciate bringing the subject up.

NEWSHOUR: The writers in this book are brutally honest. What were some of the topics you were thankful that they broached?

There is some kind of conventional wisdom that you’re not really a mature person until you become a parent. And you know those are just platitudes.
MEGHAN DAUM: I was thankful for people who were able to talk about their ambivalence about it and even their sort of sadness they felt around it. I think when you make this choice there is this inclination to be defensive about it and put forth this image you have complete clarity and that you never had a second thought or that there was never any other way to go, and that’s just as intellectually dishonest as the parent who says, every day of my life with my children is wonderful. Nobody feels that way no matter what kind of life they live or choices they’ve made. Like Paul Lisicky’s piece — there was a lot of sadness in there and you don’t get the feeling from the essay that he feels he went the wrong way or that he should have done something different, but he is willing to say, hey, you know life isn’t all one thing and decisions aren’t all one thing and we can feel lots of ways about the choices we make. There are pieces that have a noticeably gentle introspective approach and other essays that use their introspection to sort of go to perhaps thornier places and say things that we might not all say. That is Lionel Shriver’s wheelhouse. We couldn’t have a book on the subject without hearing Lionel Shriver on it. (Shriver wrote the 2003 novel “We Need to Talk About Kevin” about a fictional school massacre.) And she wouldn’t be her if she wasn’t jabbing us in the side a little bit. So I was thrilled to include her in the book.

NEWSHOUR: There is the trend that people are waiting longer to have kids, and as a result many likely will not have children. What do you hope the discussion around that will be, based on what you’ve heard from these writers?

MEGHAN DAUM: I hope that the discussion becomes, for women and men going into their 20s and 30s: is this something that I want to do and why? We’re not in danger of not having enough kids on this earth. Becoming a parent is always going to be a default setting. I truly believe there will always be more people who want to have children than who don’t. What I want is to have people’s notion of adulthood no longer be so defined by being a parent. There is some kind of conventional wisdom that you’re not really a mature person until you become a parent. And you know those are just platitudes. There are plenty of parents who do not seem like fully mature adults and there are plenty of people who don’t have kids who are incredibly selfless and do a lot for their communities and for kids. Often these assumptions and these clichés really kind of affect people’s core beliefs about themselves and about the culture in a way that is just false.

It is important for children to grow up in a world where there are all kinds of adults and role models around them, for them to know it’s not just parents and people who are parents that care about them, but that there are people who are living other kinds of lives. I actually think it does a disservice to kids, when they think that every adult is someone who has kids. I grew up in the suburbs and I grew up in a community where there was no one between the ages of 18-40 because the only reason to live there was to raise a family. I didn’t know any adults who weren’t parents and that is a very limiting world view. Parents and non-parents should be partners — we all care about our communities, we all care about kids, we all care about having a healthy society. I don’t know why only parents have been granted the kind of status as being the only people who care about their communities.

Editor’s note: This conversation has been excerpted and edited for clarity.

Left: Becoming a parent is always going to be a default setting, but it shouldn't be, says author Meghan Daum. She has edited a new book that features essays by writers who explain their position on not having children. Photo by Getty Images