White House asks: What is the story behind your menorah?

A menorah created by a Holocaust survivor and one designed in Israel in the 1920s were selected for a White House ceremony this week from more than 50 submissions.

On Nov. 11, the White House asked people to send in pictures of menorahs along with stories about what makes them special for the White House’s 36th annual menorah lighting ceremony. President Barack Obama attended this year’s ceremony on Wednesday, the fourth night of Hanukkah. 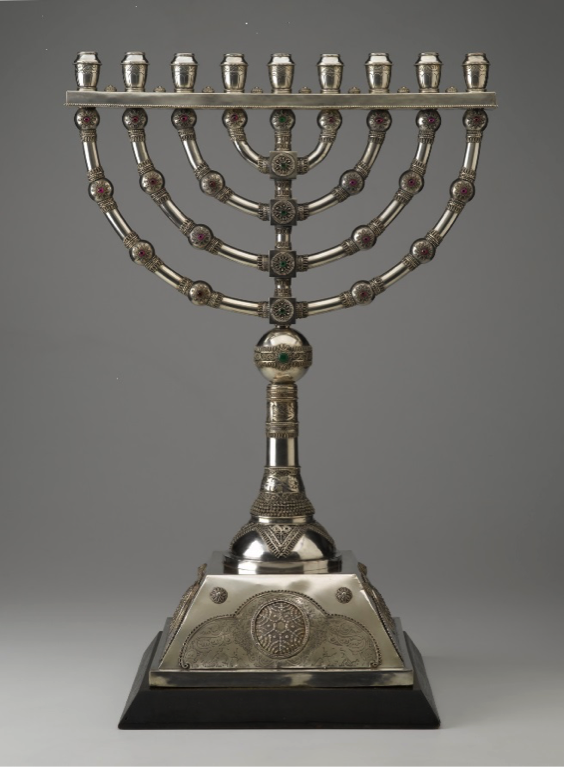 This menorah from the North Carolina Museum of Art’s Judaic Art Gallery that was created in Israel during the 1920s was selected to be lit in the White House this year. Photo courtesy of the White House blog

This year’s first selection was lit by the Israeli President Reuven Rivlin and his wife, Mrs. Nechama Rivlin in the East Room of the White House December 9. The menorah was created in Israel during the 1920s by designer Ze’ev Raban and is housed in the North Carolina Museum of Art’s Judaic Art Gallery. 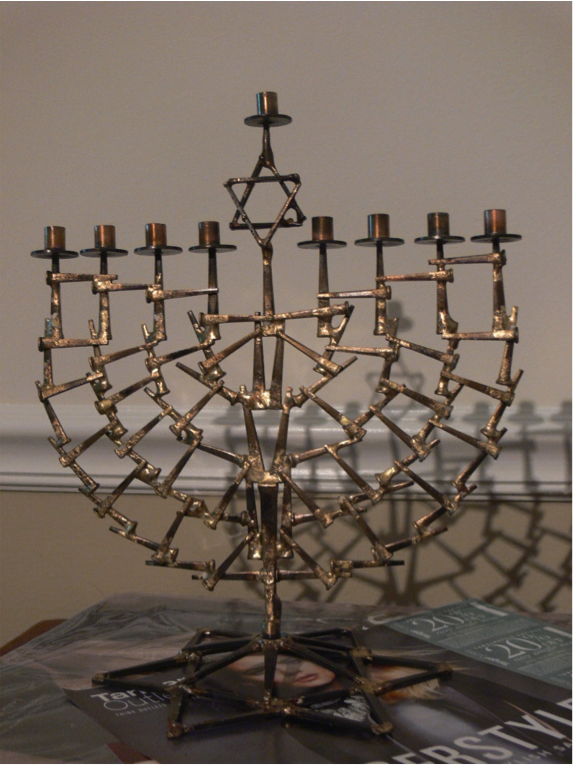 This menorah, created by a Holocaust survivor, was chosen to appear in a White House ceremony this year. Photo courtesy of the White House blog

The second menorah in this year’s ceremony was created by Erwin Thieberger, a Holocaust survivor who was a refugee to the U.S. after World War II. Theiberger made menorahs from cement nails and solder while he was an inmate in one of Auschwitz’s sub-camps. After WWII, Theiberger settled in the Washington, D.C. area and continued to make menorahs similar to the ones he made during the Holocaust. The Leidman-Golub family owns the menorah. 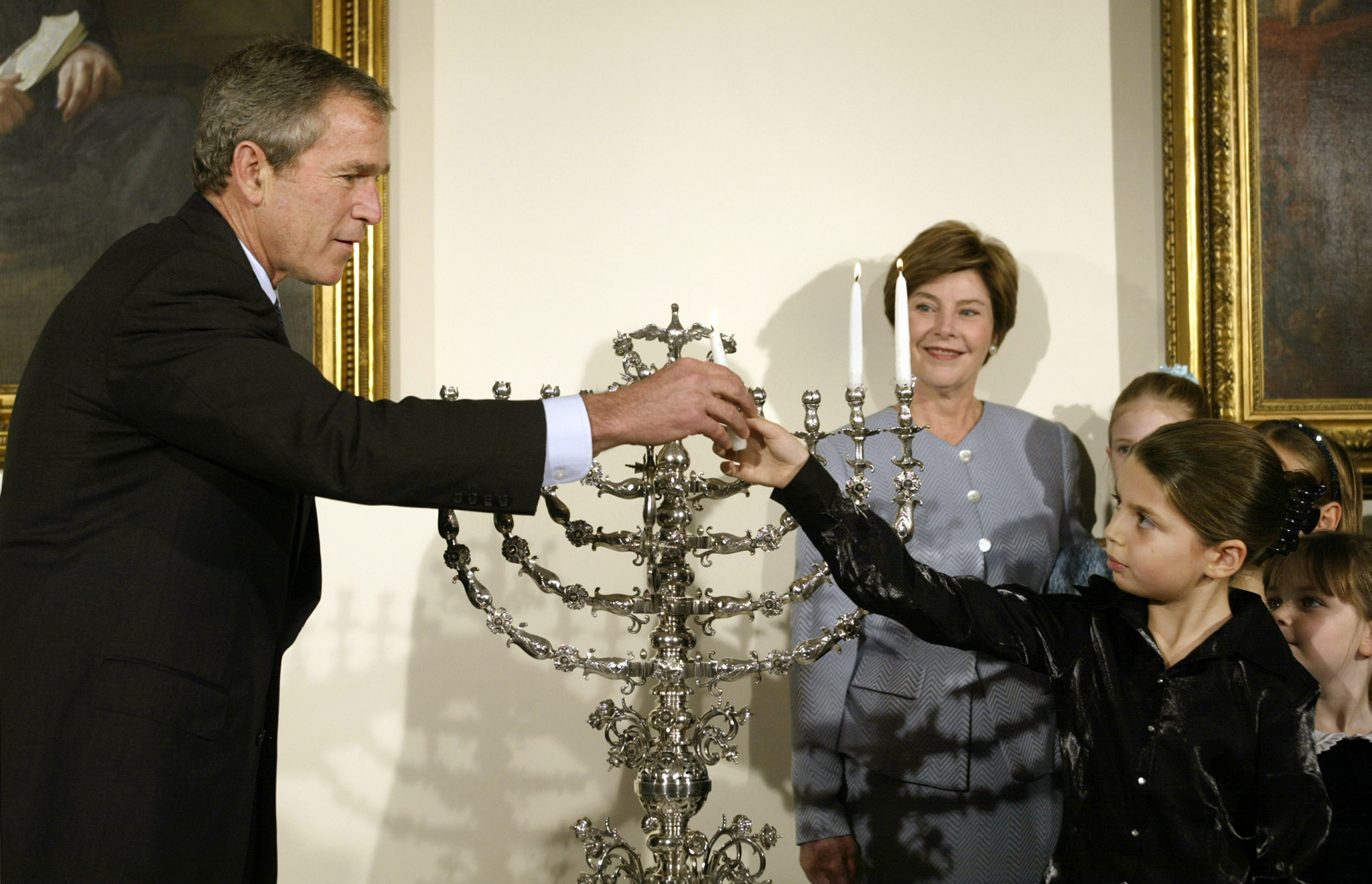 President George W. Bush joins eight-year-old Talia Lefkowitz as they
light a hundred year-old menorah on loan from the Jewish Museum in New
York during a Hanukkah reception in the White House Dec. 10, 2001. Photo by Kevin Lamarque/Reuters

Jimmy Carter was the first president to participate in a menorah lighting ceremony in 1979, and 22 years later, President George W. Bush became the first President to light a menorah in the White House residence on Dec. 10, 2001.

In his first ceremony, President George W. Bush lit a 100-year-old lamp that was on loan from the Jewish Museum in New York. Obama attended a ceremony in 2012 where a 90-year-old menorah from a synagogue damaged during Hurricane Sandy was lit. Last year, two menorahs were crafted in Israel for the White House ceremony. 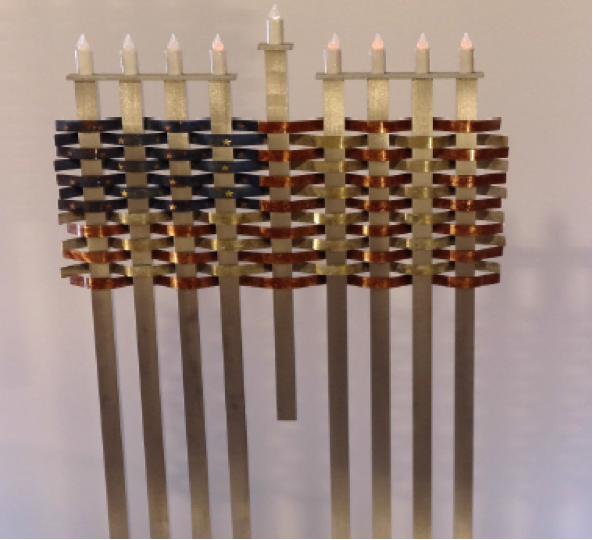 The 9/11 Solidarity Menorah was created by Michael and Bonnie Berkowicz who also designed the first menorahs to be displayed in the lobbies of the World Trade Center. Photo courtesy of the White House blog

Other notable menorahs from this year’s submissions appear on the White House blog, including the 9/11 Solidarity Menorah, which was first lit on the last night of Hanukkah at 7 World Trade Center in 2001. It was created by Michael and Bonnie Berkowicz, who also designed the first menorahs displayed in the lobbies of the World Trade Center in 1990. 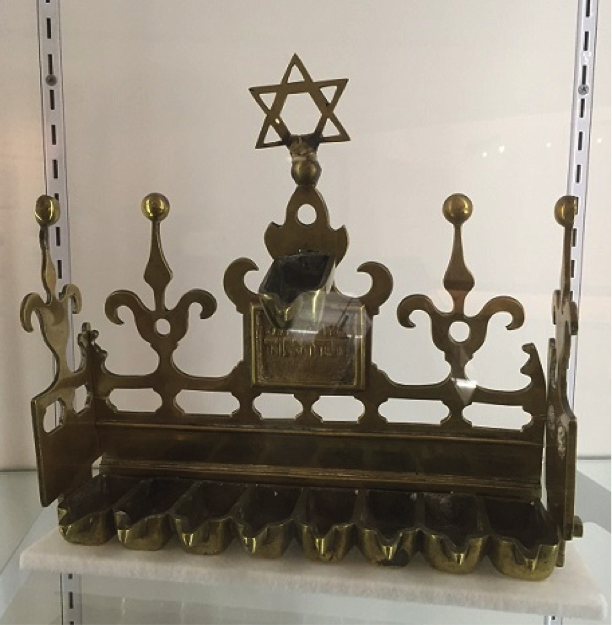 This menorah belongs to the third-oldest Jewish congregation in the U.S. Photo courtesy of the White House blog

One menorah was nominated by the third-oldest Jewish congregation in the country, Congregation Mickve Israel in Savannah, Georgia, which was established 282 years ago. The menorah was created by Sephardic Jews in Spain or Portugal in the 15th-16th centuries, and can be folded, since Jews needed to be able to hide their practice at the time. 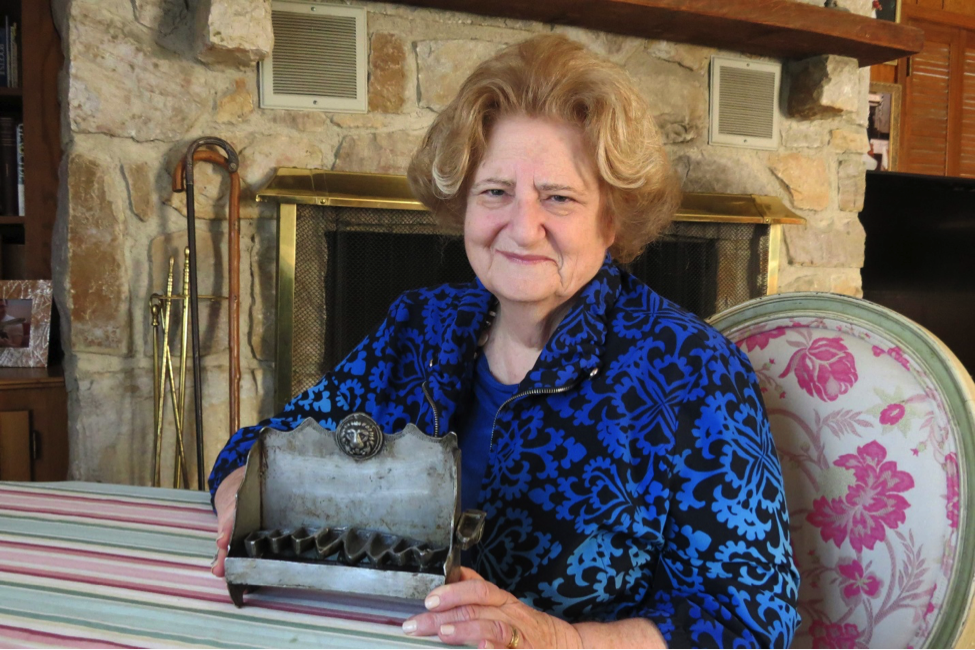 Jeanette Eichenwald of Allentown, PA holds the Eichenwald Menorah, a family heirloom that outlasted the Dachau concentration camp. According to the story on the White House Blog, Eichenwald’s grandfather, along with other men, took the great risk of lighting the menorah in the concentration camp. They used fraying fibers from their cotton uniforms for wicks and bits of fat from their meals for oil, and one man bartered his wedding ring to a guard for a match.

The group was caught with the menorah on the second night of Hanukkah and severely beaten; Eichenwald’s grandfather was killed and her father was blinded in the attack. An inmate who discovered the menorah buried it, and years later, he unearthed it to return it to Eichenwald’s father in Pennsylvania. 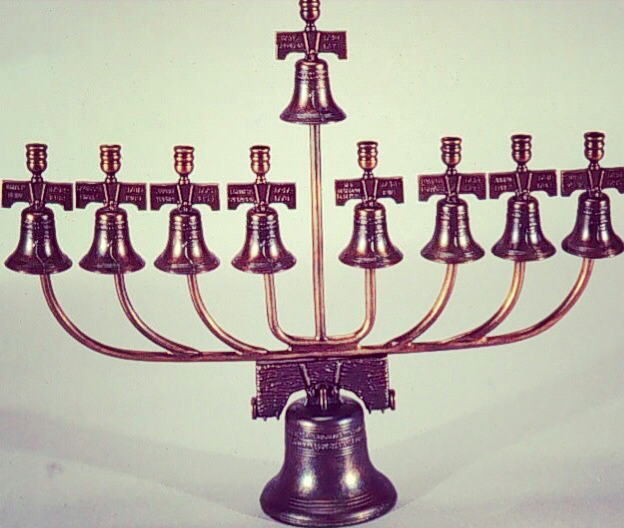 The Liberty Bell Menorah is inscribed with names of famous Jewish patriots. Photo courtesy of the White House blog

The Liberty Bell Menorah was nominated by Manfred Anson, who has a collection of over 200 menorahs. The name, birth date, and year of death of a famous American Jewish patriot is inscribed on each bell on this unique menorah. 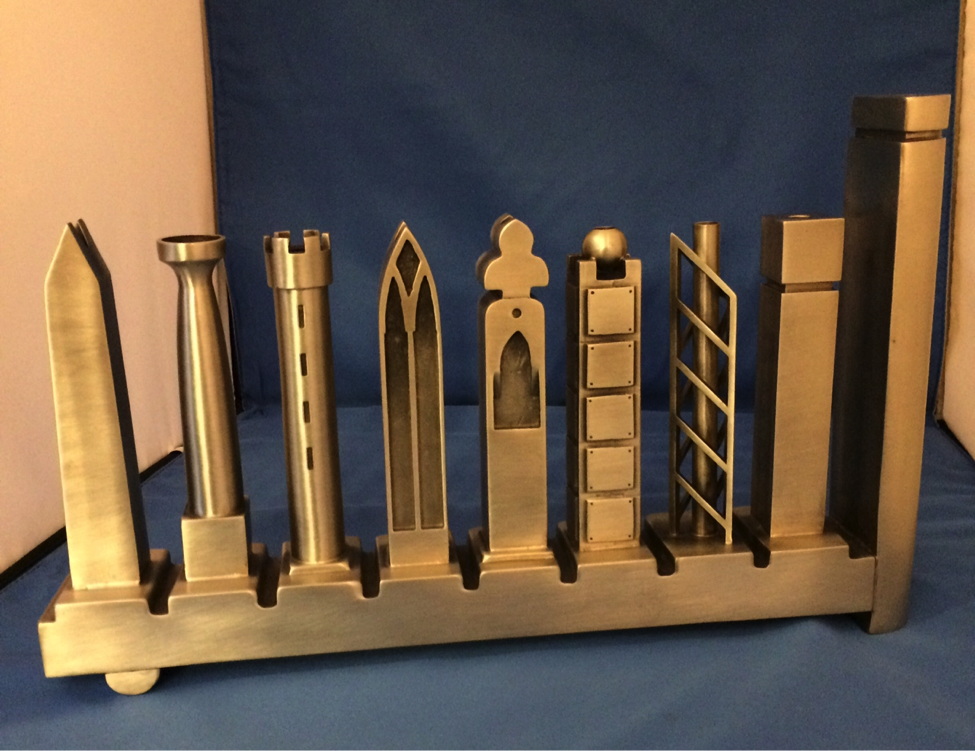 This menorah was created by Richard Meier, a Pritzker Architecture Prize winner. Photo courtesy of the White House blog

Locations of Jewish expulsion are represented in the first five candle holders including, from left to right: Egypt, Roman Palestine, France, England and Spain. The emancipation of Jews and the expansion of their population in Vienna in the late 19th century is represented in the sixth candleholder. The seventh candleholder represents Jewish massacres in Tsarist Russia, and the eighth represents the Holocaust.

Left: Israeli President Reuven Rivlin lights a menorah as he joins President Obama and First Lady Michelle Obama for a Hanukkah reception at the White House in Washington December 9, 2015. Photo by Jonathan Ernst/Reuters