Final Message From HEAL Africa’s ‘Mama Lyn’: Tell Them Not to Cry 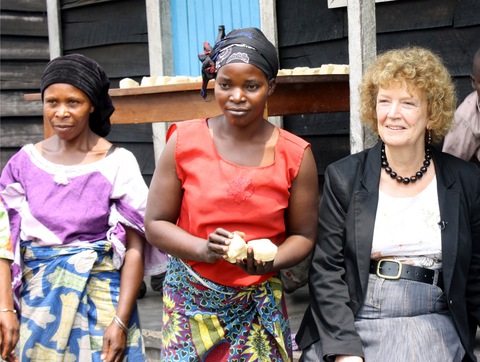 Lyn Lusi (right) with some of the women who received help from HEAL Africa. Photo by Nicole See for the NewsHour.

HEAL Africa co-founder Lyn Lusi, who died Saturday from cancer at age 62, spent most of her recent years at the center of one of the world’s most protracted civil wars. She was able to distill the complexity of all that has happened in the Democratic Republic of Congo down to one basic human failing.

Methodically, Lusi worked to counter that urge with one she believed was equally innate in all of us: a community’s call to care. Out of the rubble of war and even a volcanic eruption (Mount Kivu in 2002) that consumed the city of Goma, she and her husband Jo set about building that caring community.

Although medical expertise was the foundation (Jo Lusi remains the only orthopedic surgeon in the entire eastern Democratic Republic of Congo), HEAL Africa has gone beyond its modest but critical health care center in Goma. It has established legal clinics and so-called Nehemiah committees, trying to restore respect for elders and the rule of law in a land where child soldiers have grown up in militias that patrol with impunity.

That their enterprise was no more than a “bucket in an ocean” did not concern the Lusis, who felt compelled by their deep faith to do what they could. Nor did the question of succession. The Lusis have trained dozens of health care professionals and leaders that they are confident will carry on their work in future decades.

The bigger challenge, Lyn Lusi said, was to get the global community to care about what is happening in Congo.

“Any time you shut out the concern (about) others’ suffering, you diminish your own humanity,” she said.

There is plenty, she added, that connects rich countries to the conflict in Congo, starting with the minerals procured from here like copper and coltan with which this land is richly endowed — and cursed. Rival militias have staked their claim and control over these riches in a state where government control, for what its worth, is precarious. There have been moves to stem such trade, including the Dodd-Frank Reform Act, which requires companies to track the use of “conflict minerals” in their production of certain consumer products. In Lyn Lusi’s mind they are a tepid, half-baked response.

“The conflict minerals are exchanged for what?” she asked. “They’re exchanged for arms. Why do they stop here at the conflict minerals and not deal with the arms coming in? There’s a sort of double-talk there and a sort of hypocrisy. If you can say track a golf ball, on a golf course from outer space, can we really not track containers of arms coming in?”

At no point during our visit to Goma in mid-January did Lusi betray any appearance of illness, or even fatigue, despite lengthy treatments she had undergone in recent months for her cancer. Nor did she want to dwell on herself. I only learned of her illness after hearing a veiled reference to it during our interview with her husband.

“Doctors say I don’t have long to live,” she told me. “But I’m not listening to them.”

She quickly deflected the conversation toward the women we were visiting at a HEAL center for victims of sexual violence.

Funeral arrangements are pending for an event that is likely to draw thousands of admirers of a woman known here as “Mama Lyn,” who came to this country in 1971 to teach in a missionary school and never really left (aside from short stints abroad).

Lyn Lusi was 62 years old. She passed away from terminal cancer. She leaves behind her loving husband Jo, son Paluku and his wife and son, daughter Nadine, her sisters and thousands of friends and colleagues who loved her. She will find her resting place and last home in Butembo, North Kivu in DR Congo where the Lusi family is from. One of her last words before her death were: “Tell them not to cry.” Her love and her full heart will carry on — forever.