The tops of teepees could be seen in the distance, east of where a standoff between police and protesters was intensifying. Draped in a Pendleton blanket stood Casey Camp-Horinek praying in the middle of North Dakota Highway 1806. The Ponca woman, a respected traditionalist, was singing with a sacred pipe gripped in her hands. A small group had gathered closely around her. One indigenous elder stood with an eagle staff, a sacred prayer stick, by his side.

“This is your last chance,” boomed a voice from the intercom of a nearby armored truck. The prayer group didn’t budge. Camp-Horinek continued to sing.

Dozens of protesters looked on, some chanting a slogan that has branded the anti-pipeline campaign: “Mni Wiconi, Water is Life”.

“For us, it’s the freedom of religion. Constitutional rights are being violated here.”

For months, demonstrators — who prefer to be called water protectors — have occupied land along the path of the Dakota Access Pipeline, staging prayer ceremonies. Their latest action to defend the Missouri River occurred Wednesday near the Standing Rock Sioux reservation. Protesters attempted to build a bridge to cross the Cantapeta Creek. Some even swam to confront police who they criticize for their continued guarding of the energy project.

The pipeline, which crosses four states, would transport up to 570,000 barrels of fracked crude oil daily, 92 feet below the Missouri River. Demonstrators opposed to this plan have been pepper-sprayed, shot at with rubber bullets and faced arrest. Local law enforcement say among the thousands of activists opposed to the pipeline are criminals who trespass and vandalize private property. 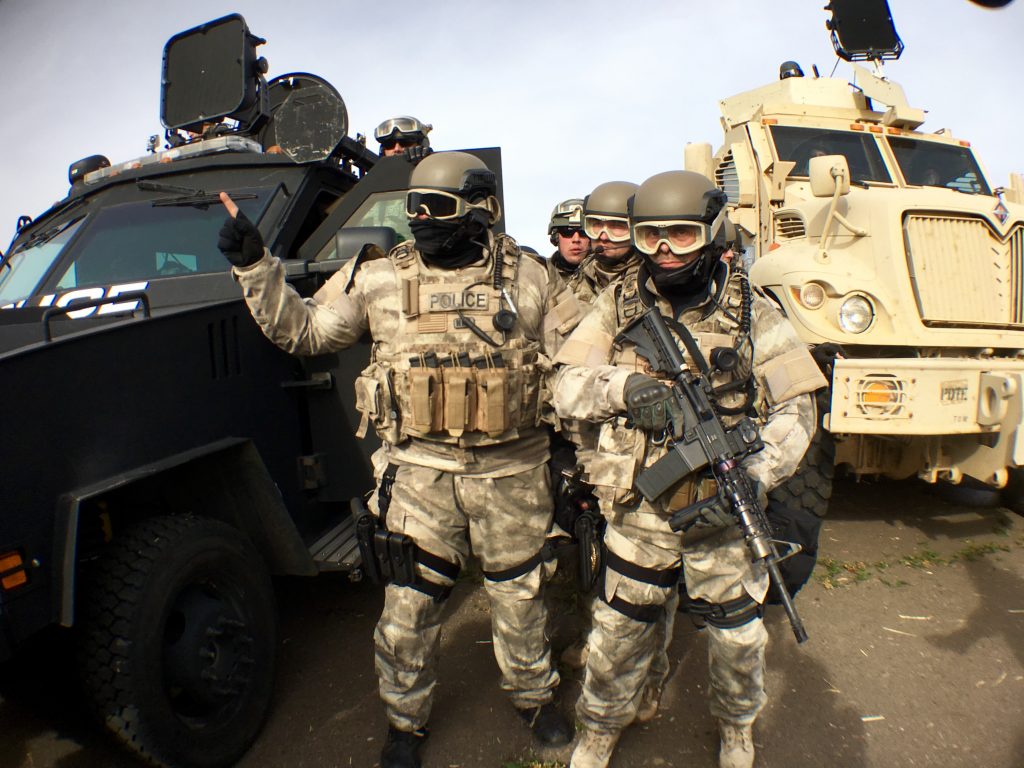 Local and state law enforcement and troops with the National Guard conducted a military-style sweep of a site where demonstrators had gathered to try and block the Dakota Access Pipeline. Photo by Jenni Monet for The PBS NewsHour

On October 27, about 200 police in riot gear along with soldiers with the National Guard carried out a mid-day raid at a protest encampment meant to block construction of the pipeline. More than 140 people were arrested that day on charges resulting in criminal trespassing, rioting and endangerment by fire. The last citation, a felony, stemmed from the burning of several vehicles allegedly lit by protesters.

Camp-Horinek and members of her prayer circle were arrested and charged with all three crimes. Moments before their arrests, officers formed a human blockade around the small group as the voice from the armored vehicle bellowed two repeated orders: “leave the roadway; leave private property.”

“I’ve never felt so centered and grounded and protected as I did at that particular moment,” said Camp-Horinek. “Even the noise cannon didn’t effect me, the pepper spray, the jostling. I sprinkled water in a circle around me and that protected me.”

“There are people that are very prayerful and very peaceful,” said Captain Bryan Niewind of the North Dakota State Highway Patrol. “But there were times when force had to be used, because of the action of the people that were being violent.” Niewand says some protesters threw feces, water bottles and logs at officers.

But Camp-Horinek and others in her prayer group say they were pepper-sprayed as they bowed their heads to pray.

“We were just standing there,” said Russell Eagle Bear.

The two men are cultural preservationists with South Dakota’s Rosebud Sioux Tribe. Last Thursday, they, along with Camp-Horinek, were in Standing Rock to prepare for upcoming talks with members of the Obama administration.  When they heard about the raid, Camp-Horinek said a vote was taken among the group of traditionalists: stay at Standing Rock Sioux tribal headquarters or go to the protest site, observe, and if needed, pray.

“The elder men felt it was necessary for the woman with the pipe to stand, so of course that meant it was me,” said Camp-Horinek.

“She was praying, and the police came up and we protected her and her pipe,” said Eagle Bear. That’s when he said he and the others were pepper-sprayed and then arrested.

“We have a law in place to protect our cultural resources and that pipe is number one with us,” he said.

>On Eagle Bear’s feet were the tan plastic flip-flops issued to him upon being booked in jail. He said Morton County had lost his shoes, his wallet, a cell phone and keys in the mix of Thursday’s mass arrests. Standing outside the Morton County Courthouse, he worried about Camp-Horinek’s sacred pipe.

“I’m hoping she gets it back.”

The night of the arrests, North Dakota Governor Jack Dalrymple spoke before local media. “The situation has been well-handled from start to finish,” Dalrymple said. “Our state highways, our county highways, private property, is not the place to carry out a peaceful protest and we will stand by that for as long as we have to.”

Despite the governor’s praise, the Morton County Sheriff’s Department — the agency that led the October 27 operation — now faces backlash for what’s been called a militarized sweep on peaceful protesters. Law enforcement used pepper spray, rubber bullets, concussion grenades and Tazers to push activists away from Dakota Access construction. Demonstrators say the use of force was excessive and insist their group of supporters was unarmed. 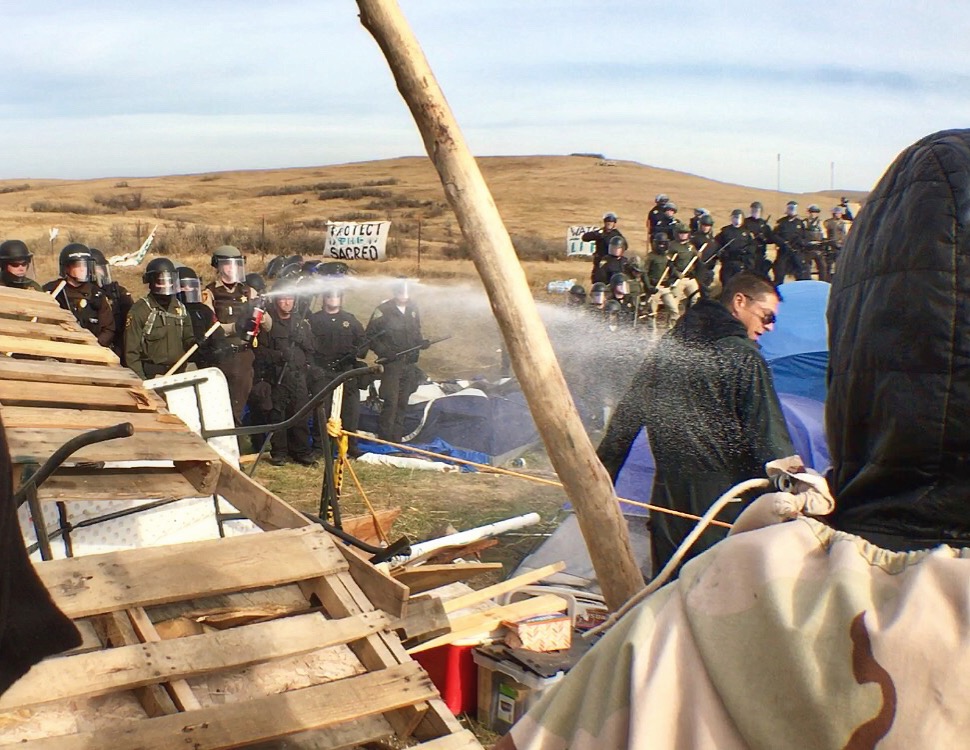 A demonstrator protesting the Dakota Access Pipeline is pepper-sprayed by law enforcement during the October 27 raid near the Standing Rock Sioux reservation. Officers from several states and soldiers with the National Guard assisted the Morton County Sheriff’s Department in an operation that involved using pepper spray, Tazers, rubber bullets and MRAP sirens to disperse the demonstration. Photo by Jenni Monet for The PBS NewsHour

Meanwhile, Eagle Bear and Rhodd, the two Lakota elders who were arrested along with Camp-Horinek, are drawing attention to another concern.

“For us, it’s the freedom of religion,” said Rhodd, 64. “Constitutional rights are being violated here.”

Eagle Bear and Rhodd said they also witnessed men being dragged out from an inipi, a sweat lodge ceremony, at the time of the raid. For Native Americans, this prayer space is similar to any church or synagogue.

According to Captain Niewind, officers waited an unspecified amount of time before disrupting the prayer session. “Obviously we could not allow them to stay in there for hours and hours and hours,” said Niewind. “We respected that until it was safe for us to have them continue on their way.”

Meanwhile, a number of teepees that were erected on historic Treaty land directly in the path of pipeline were also razed. On Tuesday, Morton County Sheriff Kyle Kirchmeier allowed a designated number of protesters to return to the encampment to ensure the remaining dwellings were dismantled in a respectful way.

“They took their c’anupas (ceremonial pipes) and their prayer offerings. They called our prayer sticks weapons.”

“We’re making sure that any cultural effects are properly taken care of,” said Kirchmeier.

According to Camp-Horinek, she said sheriff’s deputies seemed genuinely concerned about how to handle her sacred pipe during her arrest. “I was never separated from my pipe,” she said and added that, at one point, she was able to cradle the prayer object in her lap, despite her hands zip-tied behind her back.

But other aspects of her arrest are now under critical review. Camp-Horinek is among the hundreds who say they were marked with numbers on their bodies and corralled into cage-like holding facilities that activists have referred to as dog kennels.

Two separate investigations are now underway in review of Morton County’s response to the anti-pipeline occupation. Amnesty International has sent a delegation to monitor the activity of law enforcement. Special envoys with the UN Permanent Forum on Indigenous Issues (UNPFII) also began their fact-finding mission. Also arriving to Standing Rock this week is a team from the Department of Justice promoting dialogue between law enforcement, tribal leaders and government officials.

In the aftermath of the October 27 standoff, Standing Rock Sioux Tribal Chairman Dave Archambault II has threatened to sue the state of North Dakota. “I will not negotiate,” Archambualt said. “I don’t see any give. It’s only take,” he said, referring to state and energy officials.

The tribal leader has complained that Standing Rock was inadequately consulted about the Dakota Access Pipeline. The tribe’s opposition stems from concerns that the pipeline would rupture, forever contaminating its primary water supply, the Missouri River.

New aerial footage this week reveals construction has now extended its most eastern reach — the closest it’s been to the Missouri River and an easement of land owned by the U.S. Army Corps of Engineers. On September 9, the Obama administration called for a temporary halt on any construction slated on Corps land. In a recent interview with Now This, President Obama said he’s exploring options to reroute the pipeline but would wait to address the matter in ‘several more weeks’.

“Letting the situation ‘play out’ is quite literally putting lives in danger,” said Morton County Chairman Cody Shulz. In a prepared statement, he expressed concerns  that “the ‘out-of-state militant faction” of the pipeline opposition movement would escalate violence.

Obama’s comments came just days after Arvol Looking Horse publicly called on the president to intervene. The day after the police raid, the Lakota spiritual leader and his family waited for hours at the Morton County Courthouse. Looking Horse expressed outrage over the sacred items, and the elders tasked with protecting them, being held by the sheriff’s department.

“They took their c’anupas (ceremonial pipes) and their prayer offerings,” Looking Horse said. “They called our prayer sticks weapons.”

Earlier that morning, he said he wrote a letter to the President. Looking Horse also conducted a prayer ceremony for the President Obama during his 2014 visit to Standing Rock.

“October 27, 2016, our Elders stood with their sacred items, including their sacred C’anupa, pleading for sanity in a state of distress,” the letter reads. “It is time you stop this desecration… In a Sacred Hoop of Life, where there is no ending and no beginning! Onipiktec’a (that we shall live).”

Left: Lauren Howland (Jicarilla Apache), 21, stands before police in resistance to the Dakota Access Pipeline. Howland is one of thousands who have protested along with the Standing Rock Sioux Tribe to support their fight to protect the Missouri River from pipeline construction. Photo by Jenni Monet for The PBS NewsHour.