For decades, the U.S. military has worked to create a force that mirrors the racial and ethnic diversity of the American population. Now, a congressionally charted commission has reported that while the Pentagon has achieved that goal in the lower ranks, the story is much different the higher you go up the officer ladder.

According to the report, “the demographic composition of the officer corps is far from representative of the American population and … officers are much less demographically diverse than the enlisted troops they lead.” The Military Leadership Diversity Commission also found that “with some exceptions, racial and ethnic minorities and women are underrepresented among senor noncommissioned officers”. (Read the full report.) 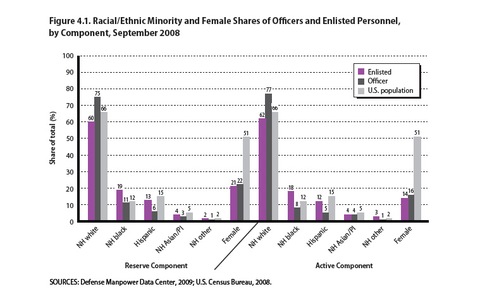 At the general-officer rank — or so-called flag-officers in the Navy — the level of military diversity diminishes considerably. As of 2009, the Army was the most diverse service, with minorities making up roughly 10 percent of its generals. In the other services, the minority general- or flag-officer population was 9 percent in the Marine Corps, 6 percent in the Navy and 5 percent in the Air Force. 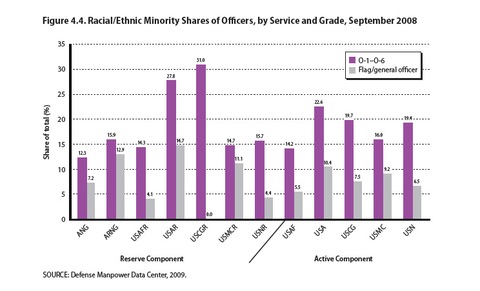 Gender diversity among U.S. military officers also diverges from levels seen in the nation’s population. Fifty-one percent of Americans are women, but they account for 16 percent of uniformed officers. 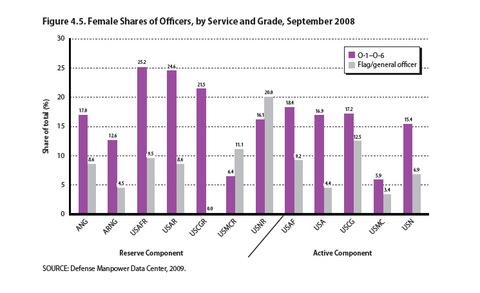 Reasons behind the disparities

The report cited two main reasons for the shortage of women at top levels: the exclusion of women in combat arms — often a source of promotion — and a higher turnover rate than their male counterparts.

The commission recommended eliminating laws and policies that exclude women from serving in military jobs such as infantry, armor and special operations.

The commission also played down an often cited argument that gender integration could harm combat effectiveness.

“There is little evidence that the integration of women into previously closed units or occupations has had a negative effect on important mission-related performance factors, such as unit cohesion,” the commission said. “The blanket restriction for women limits the ability of commanders in theater to pick the most capable person for the job.”

But women are less likely to remain in service as long as men, saying when surveyed that “the high frequency of deployments and the desire to settle in one location were both listed as primary motivations for separating” from the military. In general, women were less likely than men to see the military as a career, affecting their chances at promotion.

A barrier to minorities becoming high-ranking officers was a desire to move into the civilian world. According to the report, research found that many minorities enlist in the military because they seek knowledge and training to help them in the outside job market, and therefore choose jobs in transportation, food services, military police and finance. Opportunities for promotion to general-officer rank in these fields are much more limited than those in combat arms, the commission stated.

In addition, some minorities in the military interviewed by the commission “commented that Army Green Berets and Rangers were believed by many to be white organizations with racist attitudes,” so they shunned those services, according to the report.

The commission also found that promotion rates from major to colonel for several minorities were lower than the average. But the promotion board process “appeared to be designed to be institutionally fair and to mitigate the effects of bias on the part of any individual board member,” the commission said, so it was hard to pinpoint specific causes.

In addition, the commission pointed out simply that lower levels of minorities and women enlist in the military compared to their numbers in the general population.

The commission offered 20 recommendations for improving the diversity of the military’s leadership, ranging from more training in diversity dynamics and practices, to improving the recruitment of minorities and women among the pool of qualified candidates to enlist, to establishing a “chief diversity officer” who reports directly to the Defense secretary. It also recommended the secretary conduct “accountability reviews” and meetings with top brass to encourage diversity.

More transparency in the promotion system, so that service members would better understand performance expectations and promotion criteria, also would help, the commission said.

The commission’s members included 30 men and women, most of whom had military careers. It was led by retired Air Force Lt. Gen. Lester Lyles and retired Army Lt. Gen. Julius Becton.