Twenty-three year-old Sylville Smith was stopped on August 13 for a traffic violation on Milwaukee’s north side. He fled on foot. Following a chase, Smith was shot dead after police say he turned toward them with a stolen gun. Officials haven’t provided additional details or released body camera footage pending an investigation, but the shooting sparked a weekend of protests that led to rioting in the city’s Sherman Park neighborhood.

Those riots brought national attention to a long list of problems plaguing Milwaukee’s African-American population. The city is ranked by 24/7 Wall Street as the worst place to be black in America, and leads the nation in many negative indicators. Milwaukee is the most racially segregated metro area in the country and is the second most politically stratified, according to the Milwaukee Journal Sentinel. Four-out-of-5 black children in Wisconsin are living in poverty — 42 percent in the city of Milwaukee. And a 2013 study found that one in every eight black men in Wisconsin was in state prison or jail.

“[The] community has been figuratively burning, has been downtrodden by economic blight and sparse educational options.” — Walter Bond, Teach for America – Milwaukee

“[The] community has been figuratively burning, has been downtrodden by economic blight and sparse educational options,” says Walter Bond, chief of staff for Teach for America — Milwaukee.

While the riots provide insight into the city’s current disparities, peeling back the complicated layers of segregation and discrimination uncovers decades of racial strife and a stark generational divide when it comes to finding solutions.

Tensions between African-Americans and law enforcement in Milwaukee aren’t exactly new. Just two years ago, protesters took to the streets after the county district attorney declined to charge a white police officer who shot 31 year-old Dontre Hamilton 14 times, killing him. The mentally ill, black man had been confronted by the police after employees of a coffee shop reported him sleeping on a bench in a nearby park.

Protests over police killings in Milwaukee go back as far as the death of Daniel Bell in 1958. Similar to Sylville Smith, the 22 year-old was shot by police after fleeing from a traffic stop. It wasn’t until 20 years in later, in 1979, that an officer came forward revealing the shooting was racially motivated and covered up by the police department. As Marquette University professor Howard Fuller recalls, Milwaukee has experienced similar uprisings nearly every decade since.

“There’s a long history of black people being killed by the police,” he says. “So whether [Smith] was justified or not, it’s taking place within a larger context of police shootings of black people in this city.”

The tension in Milwaukee reached a boiling point in 1967, when black residents protested the city’s slow response to police brutality and housing discrimination. Black Milwaukeeans had fought for fair housing legislation for more than a decade, but exclusionary practices keeping African-Americans from living in parts of the city were still legal and common. 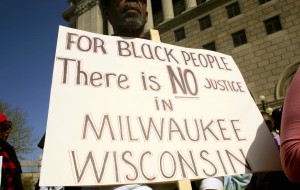 In 2006, protests erupted following the verdict of the three former police officers who were charged with beating Frank Jude Jr. in October of 2004. An all-white jury acquitted the three white off duty officers of most charges. They were later found guilty in federal court. (Photo by Darren Hauck/Getty Images)

Frustrations mounted and, that summer, protests sparked days of violent rioting. After 200 consecutive nights of protesters marching over the bridge that connected Milwaukee’s predominantly black north side with the mostly white south, fair housing laws were passed. But rather than ushering an era of integration to the city, it fueled a mass exodus of whites to the suburbs, a major contributor to Milwaukee being the most segregated U.S. city today.

This year also marks 10 years since thousands of outraged residents gathered in front of the Milwaukee County courthouse to protest the acquittal of three off-duty white police officers who severely beat Frank Jude Jr., following an altercation at a house party in 2004. Jude suffered a cracked skull and punctured eardrums after the officers accused him and a friend of stealing a wallet and police badge. Neither were ever found, and the officers, although acquitted by the state, were later convicted in federal court.

Many Milwaukeeans view the recent protests in the context of the city’s long history of tension between the black community and the police. But a frustrated Milwaukee County Supervisor Supreme Moore Omokunde says those outside the city are quick to view them as isolated incidents, ignoring the “longstanding challenges” Milwaukee faces.

“There is almost an assault, if you will, on the dignity and humanity of black people, particularly black men throughout the city,” he says.

“What the nation really saw is what happens when you inflict poverty on a group of people. What you saw was the young people retaliating,” says Andre Lee Ellis, a community activist and founder of the “We Got This” mentorship program.

On a rainy Saturday morning, Ellis ushers neighborhood boys into his community garden on Ninth and Ring streets, in the heart of Milwaukee’s 53206 zip code. Nearly 50 percent of the residents in this area live in poverty. In this community alone, more than 60 percent of all men under the age of 34 have spent time in an adult correctional facility, contributing to Milwaukee and the state of Wisconsin incarcerating more black men than anywhere else in the nation. The 53206 zip code, located in the center of the city, has come to symbolize many of Milwaukee’s contemporary hardships.

Along the neighborhood’s blocks, many of the homes are boarded or abandoned. Teddy bears pinned to a tree mark the spot where a young man was killed in a recent drive-by shooting. But just a half-mile from the border of 53206 is development for new luxury townhomes and condominiums along the Milwaukee River. The city is in the midst of an urban revitalization that, many say, has excluded the communities that need it most.

“A pocket of the worst place to be as a black man is centralized around all of the money in the city of Milwaukee. That’s scary. Because anything jeopardizing that money is subject to be targeted for oppression and suppression.” — Khalil Coleman, community activist

Nationally, as whites move from the suburbs back to the cities, Milwaukee isn’t exempt from the effects of the gentrification that creates. The stark contrast is evident between the mostly white Lakeshore and downtown neighborhoods that are just blocks away from the signs of abject poverty on the north side. As the city constructs a new $524 million arena for the Milwaukee Bucks — $250 million of that paid by taxpayers – the influx of investment into the city’s downtown is reigniting some of the historic racial tensions between African-Americans, whites and law enforcement.

“A pocket of the worst place to be as a black man is centralized around all of the money in the city of Milwaukee,” says community activist and educator Khalil Coleman. “That’s scary. Because anything jeopardizing that money is subject to be targeted for oppression and suppression.”

Coleman — as well as many of the men NewsHour spoke with — recalls increasing instances of random stops and searches by police. On the Saturday NewsHour joined him while volunteering with the “We Got This” program, Milwaukee County Sheriff squad cars tailed Coleman and the groups of young men as they canvassed the neighborhood for a community clean up event.

Despite rioting and protests dating back several generations, this era of young people taking to the streets was met with criticism not only from city officials and law enforcement, but also by many of Milwaukee’s older black residents and community leaders – even those who led similar social justice movements in the past. The immediate fallout underscores what some say are ideological differences between the city’s older black residents and the youth’s approaches to reform.

“It is a canyon of a divide,” says State Representative David Bowen, “We can’t come together to agree on even the way out of this turmoil.”

While older people tend to see the riots as what Bowen calls “angry young people who can not calm down,” he says younger people are just more skeptical of government’s role in instituting change. For many, upward mobility of Milwaukee’s small black middle class into positions of political power has yielded little progress in addressing the city’s racial disparities.

“There’s a difference between those who are elders and those who are just old,” says Milwaukee County Supervisor Supreme Moore Omokunde. At 37, he often finds himself in the middle, balancing the more radical approaches of the youth with the conventional methods of the city’s black political elite. “Elders are always reaching back, looking for somebody to hand the baton off to. Old folks just want to use their age and position to gain more. They don’t mentor.”

A lot of times, Moore Omokunde says, “the youth don’t know who is who.” Walter Bond, chief of staff for Teach for America-Milwaukee, agrees and says when Milwaukee’s young people are already subject to poverty and over-policing, being silenced by older black leadership is like adding gasoline to a fire, sparking the riots of mid-August.

“If you’re a young black boy who is trying to find a way and make a path in his community, you’ve got few allies in terms of institutions across our city who have your back,” he says.

But not everyone sees the issue as a rift between young and old.

“[The elders] are our wise council. We depend on them to lead us in the right direction,” says Khalif Rainey, the newly elected Alderman of the city’s Sherman Park neighborhood — where the riots took place.

Rainey says many of Milwaukee’s youth may not recognize that the fight for equality isn’t new, and is the same fight they’re in now “occurred right here 30, 40 years ago on the very same corner.”

Looking to the future

Many of Milwaukee’s new generation of emerging leaders and community advocates recognize an irony in the criticism. While the community grapples with increased national scrutiny, the uproar may have forced a city and nation to listen to the cries of a community that has long suffered from the effects of systemic racism, segregation and discrimination.

“It did accomplish people coming to the table and saying ‘we do have some deferred maintenance on quality of life issues that affect some of our community’s most vulnerable people.’ And that’s good,” Rainey says.

But community activist Andre Lee Ellis has heard this talk before, from the riots in the ‘60s to protests today. Decades of the same issues resurfacing and a blame game between generations makes him pessimistic about potential progress. He says until Milwaukee is willing to acknowledge that many of its problems stem from historic and systemic racism, the city can expect to see the same uprisings in the future that have marked its racially tense past.

“You weren’t going to stop what happened [last month] because it hasn’t been fixed since the ‘60s,” he says. “There’s nothing we could have done to stop it. But there’s some thing we can do to make it not happen anymore.”