Missile-alert mistake in Hawaii feeds doubts about a real emergency

HONOLULU — When Jonathan Scheuer got an alert on his phone of a ballistic missile headed for Hawaii, he and his family didn’t know what to do. They went to their guest bedroom, then decided it would be safer on the ground floor of their Honolulu home.

People should immediately seek shelter in a building “or other substantial structure,” once an attack-warning siren sounds, according to guidance the state distributed previously. The state recommends having 14-day survival kit of food and water.

Residents and tourists alike remained rattled days after the mistaken alert was blasted out to cellphones across the islands with a warning to seek immediate shelter and the ominous statement: “This is not a drill.”

“Clearly there is a massive gap between letting people know something’s coming and having something for them to do,” Scheuer said Sunday. “Nobody knew what to do.” 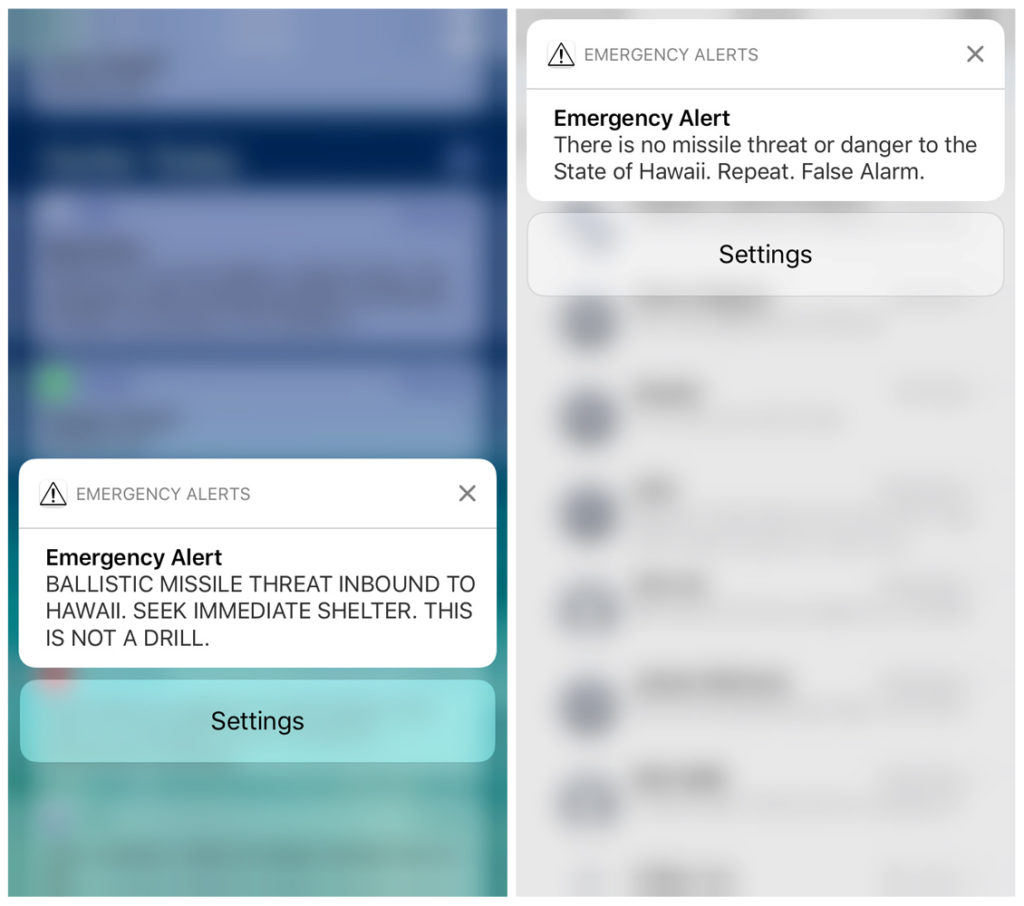 Lisa Foxen, a social worker and mother of two young children in east Honolulu, said the best thing to come out of the scare was that it pushed her family to come up with a plan if there is a real threat.

The blunder that caused more than a million people in Hawaii to fear that they were about to be struck by a nuclear missile fed skepticism Sunday about the government’s ability to keep them informed in a real emergency.

“My confidence in our so-called leaders’ ability to disseminate this vital information has certainly been tarnished,” said Patrick Day, who sprang from bed when the alert was issued Saturday morning. “I would have to think twice before acting on any future advisory.”

The erroneous warning was sent during a shift change at the state’s Emergency Management Agency when someone doing a routine test hit the live alert button, state officials said.

They tried to assure residents there would be no repeat false alarms. The agency changed protocols to require that two people send an alert and made it easier to cancel a false alarm — a process that took nearly 40 minutes.

The error sparked a doomsday panic across the islands known as a laid-back paradise. Parents clutched their children, huddled in bathtubs and said prayers. Students bolted across the University of Hawaii campus to take cover in buildings. Drivers abandoned cars on a highway and took shelter in a tunnel. Others resigned themselves to a fate they could not control and simply waited for the attack.

The 911 system for the island of Oahu was overwhelmed with more than 5,000 calls. There were no major emergencies during the false alarm, Mayor Kirk Caldwell said.

An investigation into what went wrong was underway Sunday at the Federal Communications Commission, which sets rules for wireless emergency alerts sent by local, state or federal officials to warn of the threat of hurricanes, wildfires, flash flooding and to announce searches for missing children.

The state of Hawaii “did not have reasonable safeguards or process controls in place to prevent the transmission of a false alert,” FCC Chairman Ajit Pai said in a statement, calling the mistake “absolutely unacceptable.”

“False alerts undermine public confidence in the alerting system and thus reduce their effectiveness during real emergencies,” he said.

“I would hate for anybody not to abide by alerts and warnings coming from government systems,” Nielsen said on “Fox News Sunday.” ”They can trust government systems. We test them every day. This is a very unfortunate mistake, but these alerts are vital. Seconds and minutes can save lives.”

With mobile phones ubiquitous, wireless alerts can quickly disseminate information to a wide number of users, but there have been concerns about creating a panic if they are sent too broadly.

Authorities were criticized for not sending an alert to mobile phones when fires ripped through Northern California in October, killing 40 people. Officials had decided not to use the system because they couldn’t target them precisely enough and feared a wider broadcast would lead to mass evacuations, including people not in danger, snarling traffic that would hamper firefighting and rescues efforts.

Saturday’s mistake was not the first for the state’s warning system. During a test last month, 12 of the state’s 386 sirens played an ambulance siren. In the tourist hub of Waikiki, the sirens were barely audible, prompting officials to add more sirens and reposition ones already in place.

People need to step back from questioning who pushed the button and why and focus on military de-escalation, Scheuer said.

The false alarm triggered a broader discussion about national security at a time when North Korea has been flexing its muscles by launching test missiles and bragging about its nuclear capability. Its leader, Kim Jong Un, has also exchanged insults on Twitter with President Donald Trump about their arsenals.

The standoff has whipped up nuclear fears on Hawaii and led the islands to revive Cold War-era siren tests that drew international attention.

Rep. Tusi Gabbard, a Hawaii Democrat, said officials should be held accountable for the “epic failure of leadership” behind the warning. She said the nuclear threat underscored the need for Trump to meet with Kim to work out differences without preconditions.

“The people of Hawaii are paying the price now for decades of failed leadership in this country” by setting “unrealistic preconditions,” she said. “The leaders of this country need to experience that same visceral understanding of how lives are at stake.”

Melley reported from Los Angeles. Tom Strong in Washington contributed to this report.

Left: An electronic sign reads "There is no threat" in Oahu, Hawaii, U.S., after a false emergency alert that said a ballistic missile was headed for Hawaii, in this Jan. 13, 2018, photo obtained from social media. Photo courtesy of @sighpoutshrug on Instagram via Reuters