After a marathon of 13 bargaining sessions over 16 1/2 hours produced progress toward a labor deal but left the sides still far apart, MLB extended its deadline to Tuesday at 5 p.m.

The sides planned to resume talks at 11 a.m. on the ninth straight day of bargaining.

Commissioner Rob Manfred had said Monday was the last possible day to reach an agreement that would allow the minimum time needed for spring training in order to play openers as scheduled on March 31. The union said it didn’t necessarily agree to the timeframe and just as the sides agreed to recess at 2:30 a.m., MLB gave players the new deadline.

“We want to exhaust every possibility to get a deal done,” an MLB spokesman said.

The players’ association planned to analyze the latest proposals and prepare a response for when talks resume at Roger Dean Stadium, the vacant spring training home of the Miami Marlins and St. Louis Cardinals.

The sides agreed, subject to an overall deal, to expand the postseason from 10 to 12 teams, rather than the 14 MLB had hoped for.

On central economics, the sides were still searching for agreement. Management’s proposals included:

The union believed there was an understanding on luxury tax rates, which management had been proposing to substantially steepen while eliminating higher penalties for recidivist high spenders.

Players’ latest proposals contemplated giving up on expanding salary arbitration from the top 22% to 35% by service time of the players with at least two seasons of service and less than three.

Manfred, who attended a bargaining session for the first time on Friday, sat in on two of Monday’s meetings, both two-on-two sessions that included union head Tony Clark, Deputy Commissioner Dan Halem and union chief negotiator Bruce Meyer. At the first meeting, which began at 2:45 p.m. and lasted 40 minutes, Manfred told players he wanted to make a deal. 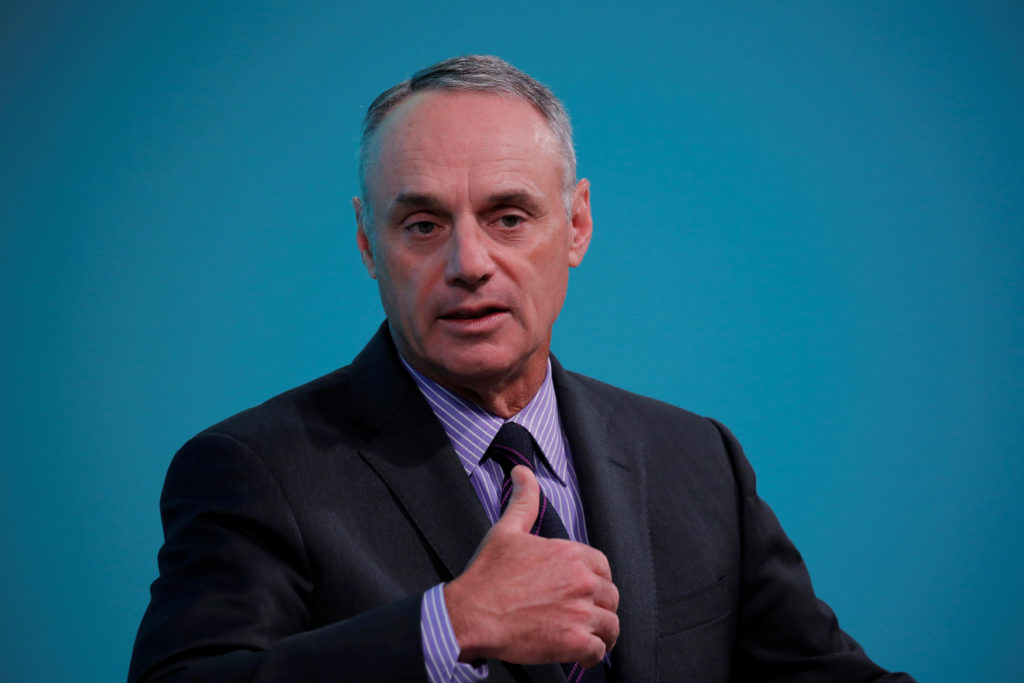 The pace then quickened, with management’s bargaining team repeatedly walking from their area in the main part of the stadium to the union in the building beyond the right-field corner that includes the Cardinals clubhouse.

“We’re working at it,” Manfred said around 6 p.m. after his second session of the day with the union.

The union said MLB kept giving it pieces of paper with new proposals.

Players and the league had met just six times on core economics during the first 2 1/2 months of the lockout.

Emotions became more heated as the sides pressed for each other’s bottom line. Philadelphia star Bryce Harper posted a photo on Instagram altered to show him in a Japanese baseball uniform with the words: “Yomiuri Giants you up? Got some time to kill.”

Yankees pitcher Jameson Taillon, who attended negotiations last week, tweeted: “Players are used to their ‘threats.’ Owners actions have made it clear all along that they have a set # of games where they still make profits/get TV money. They don’t want to play. It’s sad that these are the guys who drive the direction and ‘future’ of our amazing sport.”

Players would lose $20.5 million in salary for each day of the season that is canceled, according to a study by The Associated Press, and the 30 teams would lose large sums that are harder to pin down.

Spring training games were to have begun Saturday, but baseball’s ninth work stoppage — and first since 1995 — already has led to exhibitions being canceled through March 7.

Not since Aug. 30, 2002, has MLB come this close to losing regular-season games to labor strife. The union was set to strike at 3:20 p.m., but roughly 25 consecutive hours of meetings and caucuses culminated in an agreement at 11:45 a.m.

Left: Baseballs and a catcher's mitt lie on the grass before a MLB spring training baseball game between the Boston Red Sox and Baltimore Orioles in 2013. File photo by REUTERS/Steve Nesius