WASHINGTON — A flood of lawsuits over LGBT rights is making its way through courts and will continue, no matter the outcome in the Supreme Court’s highly anticipated decision in the case of a Colorado baker who would not create a wedding cake for a same-sex couple.

Courts are engaged in two broad types of cases on this issue, weighing whether sex discrimination laws apply to LGBT people and also whether businesses can assert religious objections to avoid complying with anti-discrimination measures in serving customers, hiring and firing employees, providing health care and placing children with foster or adoptive parents.

The outcome of baker Jack Phillips’ fight at the Supreme Court could indicate how willing the justices are to carve out exceptions to anti-discrimination laws; that’s something the court has refused to do in the areas of race and sex.

The result was hard to predict based on arguments in December. But however the justices rule, it won’t be their last word on the topic.

Religious conservatives have gotten a big boost from the Trump administration, which has taken a more restrictive view of LGBT rights and intervened on their side in several cases, including Phillips’.

“There is a constellation of hugely significant cases that are likely to be heard by the court in the near future and those are going to significantly shape the legal landscape going forward,” said Shannon Minter, legal director of the National Center for Lesbian Rights. 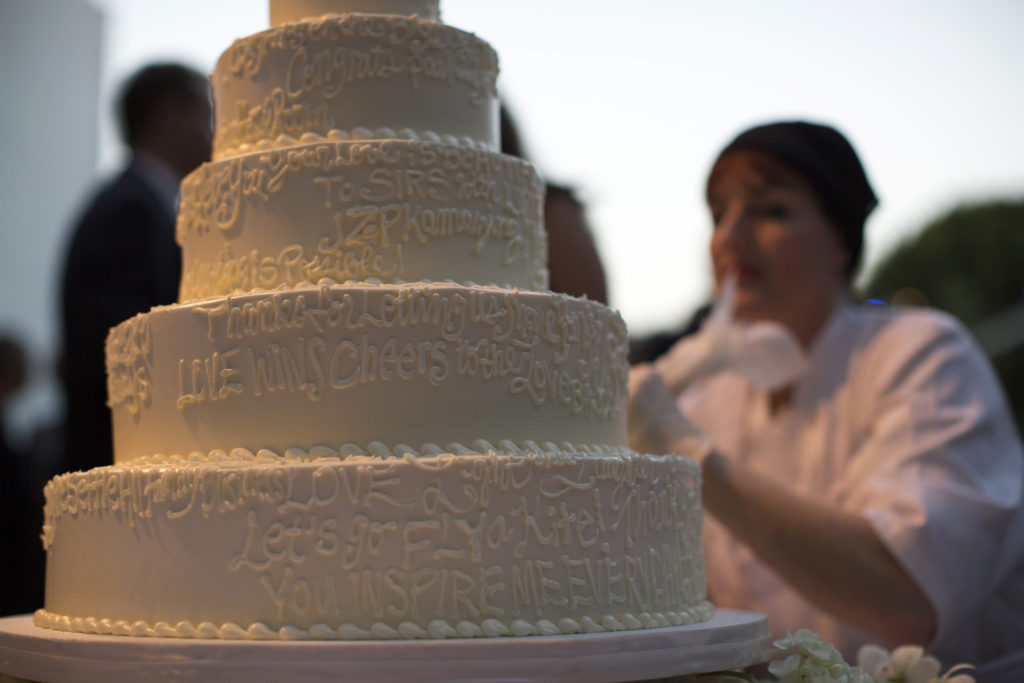 A wedding cake is decorated with messages from guests at a ceremony to celebrate the wedding of Paul Katami and Jeff Zarrillo at Beverly Hilton Hotel in Beverly Hills, California June 28, 2014. A year after becoming among the first same-sex couples to wed legally in California, the two men who were plaintiffs in the case that led to a court overturning the state’s five-year ban on gay marriage held a lavish ceremony on Saturday with family and friends including Hollywood stars to celebrate their wedding. Photo by Reuters.

Several legal disputes are pending over wedding services, similar to the Phillips case. Video producers, graphic artists and florists are among business owners who say they oppose same-sex marriage on religious grounds and don’t want to participate in same-sex weddings. They live in the 21 states that have anti-discrimination laws that specifically include gay and lesbian people.

In California and Texas, courts are dealing with lawsuits over the refusal of hospitals, citing religious beliefs, to perform hysterectomies on people transitioning from female to male. In Michigan, the American Civil Liberties Union filed suit against the state’s practice of allowing faith-based child placement agencies to reject same-sex couples.

Advocates of both sides see the essence of these cases in starkly different terms.

“What the religious right is asking for is a new rule specific to same-sex couples that would not only affect same-sex couples but also carve a hole in nondiscrimination laws that could affect all communities,” said Camilla Taylor, director of constitutional litigation at Lambda Legal, which supports civil rights for LGBT people.

Jim Campbell of the Christian public interest law firm Alliance Defending Freedom said the cases will determine whether “people like Jack Phillips who believe marriage is the union of a man and a woman, that they too have a legitimate place in public life. Or does he have to hide or ignore those beliefs when he’s participating in the public square?” ADF represents Phillips at the Supreme Court.

The other category of cases concerns protections for LGBT people under civil rights law. One case expected to reach the court this summer involves a Michigan funeral home that fired an employee who disclosed that she was transitioning from male to female and dressed as a woman.

The 6th U.S. Circuit Court of Appeals ruled that the firing constituted sex discrimination under federal civil rights law. That court is one of several that have applied anti-sex discrimination provisions to transgender people, but the Supreme Court has yet to take up a case.

The funeral home argues in part that Congress was not thinking about transgender people when it included sex discrimination in Title VII of the 1964 Civil Rights Act. A trial judge had ruled for the funeral home, saying it was entitled to a religious exemption from the civil rights law.

“Congress has not weighed in to say sex includes gender identity. We should certainly make sure that’s a conscious choice of Congress and not just the overexpansion of the law by courts,” Campbell said. ADF also represents the funeral home.

In just the past week, two federal courts ruled in favor of transgender students who want to use school facilities that correspond to their sexual identity. Those cases turn on whether the prohibition on sex discrimination in education applies to transgender people. Appeals in both cases are possible.

In the past 13 months, federal appeals courts in Chicago and New York also have ruled that gay and lesbian employees are entitled to protection from discrimination under Title VII. Those courts overruled earlier decisions. Title VII does not specifically mention sexual orientation, but the courts said it was covered under the ban on sex bias.

There is no appeal pending or expected on the sexual orientation issue, and there is no guarantee that the court will take up the funeral home’s appeal over transgender discrimination.

The trend in the lower courts has been in favor of extending civil rights protections to LGBT employees and students. Their prospects at the Supreme Court may be harder to discern, not least because it’s unclear whether the court’s composition will change soon.

Justice Anthony Kennedy, 81, has been the subject of retirement speculation, though he has not indicated he is planning to retire. When Justice Stephen Breyer turns 80 in August, he will join Kennedy and Justice Ruth Bader Ginsburg, 85, as octogenarians on the bench.

If President Donald Trump were to replace any of those justices, the court probably would be much less receptive to LGBT rights. Even the landmark gay marriage ruling in 2015 that Kennedy wrote was a 5-4 decision.

“We’re very concerned about the composition of the federal bench. Under the Trump administration, we’ve seen a number of federal nominees who have been ideologues, who have taken positions about the very right to exist of LGBT people that is simply inconsistent with fitness to serve as a federal judge,” Taylor said.

The ADF’s Campbell said that even with the current justices, he holds out some hope that the court would not extend anti-discrimination protections. “Justice Kennedy has undoubtedly been the person who has decided the major LGBT cases, but to my knowledge he hasn’t weighed in some of these other issues,” he said.