More Tombs of the Unknown? Army Admits Misidentifications at Arlington 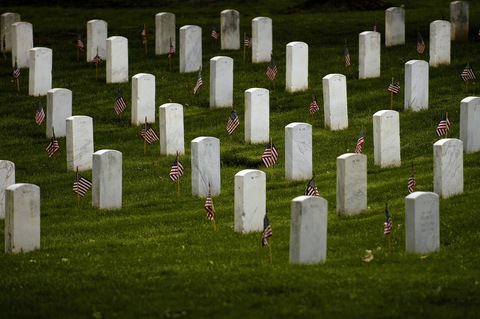 Updated 4:22 p.m. ET | At least 200 remains in Arlington National Cemetery have been misidentified or misplaced, according to a report released Thursday that brings into question burial and maintenance procedures at what Army Secretary John McHugh calls “the most sacred place on this planet.”

McHugh told a Pentagon news conference that the investigation found 211 graves where there were problems of misidentification or improper record keeping. The Army plans a more thorough investigation of the gravesites in question.

McHugh said there was “simply no excuse” and apologized for the findings detailed in an Army inspector general’s report, saying the Army owes better treatment to veterans and their family members who are buried there.

“While the Inspector General’s team found that ANC employees – under an extraordinarily high operational tempo of 27 to 30 funerals a day – performed their jobs with dedication and to a high professional standard, they also found them hampered by dysfunctional management, the lack of established policy and procedures, and an overall unhealthy organizational climate,” McHugh said. “That ends today.”

Asked what the most depressing part of the investigation was, Lt. Gen. R. Steven Whitcomb, the Army’s inspector general, responded that it was depressing that the final act for the fallen was not a “zero-defect operation” as intended. Whitcomb said that was a burden he and McHugh carry, but they’re moving forward with plans to remedy the problems.

John Metzler, Jr., the cemetery’s superintendent, will remain on the job for another three weeks until he retires. McHugh released a letter of reprimand he wrote Metzler based on the inspector general’s findings. The deputy superintendent is on administrative leave pending a disciplinary review following the release of the findings.

During a walk-through of one section, the [investigating officer] identified that ANC was not marking all of the remains of family members interred in the same gravesite (after recent interments). ANC does not currently have a policy with respect to the marking of graves.

Cremated remains were sometimes improperly handled, even being relocated to an area of the cemetery called “the spoils,” where excess dirt from gravesites is stored and then used to fill in other gravesites after burials:

More than 330,000 veterans and their family members are buried at Arlington, dating as far back as the Civil War to as recently as the wars in Iraq and Afghanistan.

In addition to implementing proposed fixes in the investigation and inspection reports, McHugh announced major changes in Arlington’s management and oversight, appointing Kathryn Condon to the new position of executive director of the Army National Cemeteries Program, whose duties will include oversight of cemetery management, reviewing and updating policies and procedures.

An Army National Cemeteries Advisory Commission will also be established to review policies and procedures. Former senators and Army veterans Max Cleland and Bob Dole will spearhead that effort.

In 2007, the NewsHour profiled contributors to a book about Arlington National Cemetery entitled, “Where Valor Rests.” Watch the report: