Tens of thousands of mourners convened on Sunday for the funeral of New York City Police Department officer Wenjian Liu, who was killed alongside his partner last month by a man who claimed to be acting in retribution for police killings of black men.

Liu, 32, is believed to be the first Chinese-American NYPD officer killed in the line of duty.

He married his wife, Pei Xia Chen, just two months before he was fatally shot. At the service, Chen said Liu was her hero. “He is my soul mate,” she said. 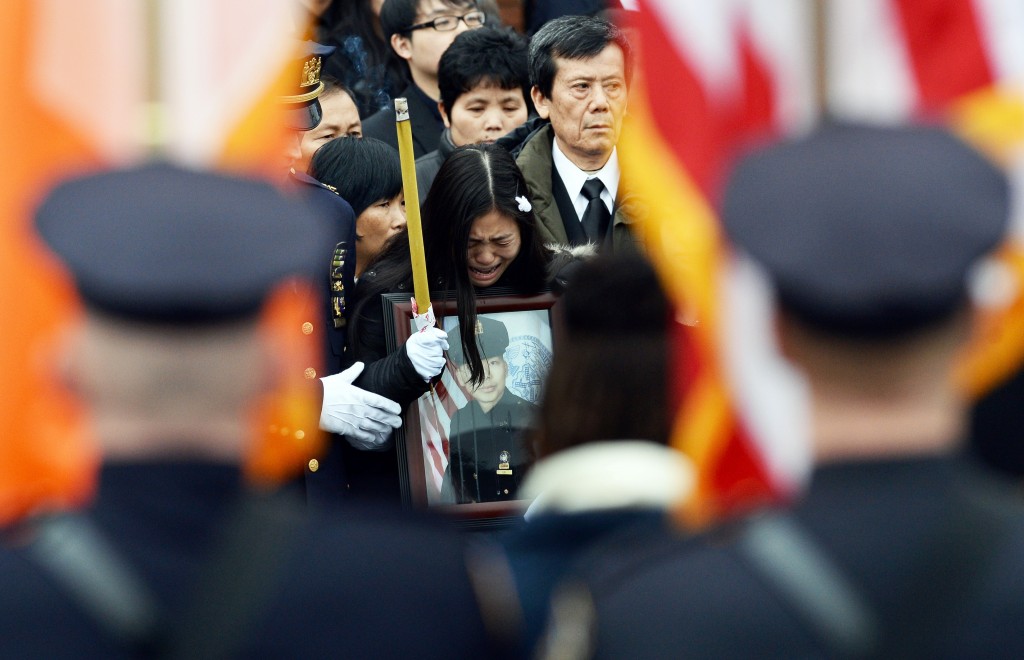 Pei Xia Chen, the widow of NYPD officer Wenjian Liu cries while holding a picture of her husband during his funeral in Brooklyn on Jan. 4. Credit: Jewel Samad/AFP/Getty Images)

At Aievoli Funeral Home in southern Brooklyn, Mayor Bill de Blasio said the city was in mourning for both Liu and his partner, Rafael Ramos, and was starting a new year with “hearts that are double heavy.”

“Let us move forward by strengthening the bonds that unite us and let us work together to attain peace,” he said.

As de Blasio spoke, scores of police officers standing outside the funeral home symbolically turned their backs on the mayor — the third such public display by officers since Liu and Ramos were killed last month.

Tension has been growing between police officers and the mayor since the police union’s president, Patrick Lynch, said the mayor had fostered a climate of anti-police sentiment that contributed to the execution-style shooting.

“There’s blood on many hands tonight,” Lynch said on Dec. 20. “That blood on the hands starts on the steps of City Hall in the office of the mayor.”

Police Commissioner Bill Bratton had asked officers in a memo on Friday to do nothing during the services that might distract from mourning officer Liu, Reuters reported. “A hero’s funeral is about grieving, not grievance,” the memo said.

Liu and Ramos were shot and killed on Dec. 20 while sitting in their parked patrol car in the Bedford-Stuyvesant neighborhood of Brooklyn.

At a press conference held that same day, Bratton said the two were ambushed and executed by a man looking to hurt the police.

“They were, quite simply, assassinated — targeted for their uniform and for the responsibility they embraced to keep the people of this city safe,” he said.

Bratton identified the gunman as 28-year-old Ismaaiyl Brinsley, who later fatally shot himself in a nearby subway station.

Left: Officers arrive for the viewing for Police Officer Wenjian Liu at Aievoli Funeral Home in southern Brooklyn on Jan. 3. Liu was killed with his partner Rafael Ramos on Dec. 20 by a man targeting the police. Credit: Kevin Hagen/Getty Images